Republicans planted a time bomb in their 2017 tax cut bill that will actually raise most people’s taxes: Nobel economist 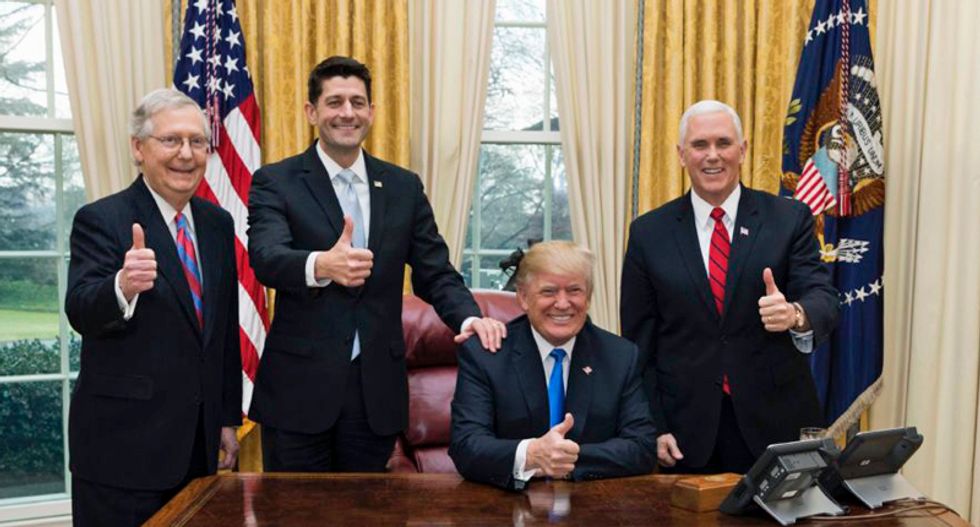 On Saturday, writing for The New York Times, Nobel Prize-winning economist Joseph Stiglitz warned that many people's taxes are about to go up.

But it's not because Joe Biden's campaign plan raises taxes, as President Donald Trump has repeatedly and falsely claimed. It's because the Tax Cuts and Jobs Act — the controversial tax cut bill passed by Republicans on a party-line vote in 2017 — has a provision that will start slowly raising taxes next year. And ultimately, Stiglitz warned, many low and middle income people will actually pay more than they did before the bill passed in the first place.

"President Trump and his congressional allies hoodwinked us," wrote Stiglitz. "The law they passed initially lowered taxes for most Americans, but it built in automatic, stepped tax increases every two years that begin in 2021 and that by 2027 would affect nearly everyone but people at the top of the economic hierarchy. All taxpayer income groups with incomes of $75,000 and under — that’s about 65 percent of taxpayers — will face a higher tax rate in 2027 than in 2019."

"For most, in fact, it’s a delayed tax increase dressed up as a tax cut," wrote Stiglitz. "How many times have you heard Trump and his allies mention that? They surmised — correctly, so far — that if they waited to add the tax increases until after the 2020 election, few of the people most affected were likely to remember who was responsible."

Starting next year, "The C.B.O. and Joint Committee estimated that those with an income of $20,000 to $30,000 would owe an extra $365 next year — these are people who are struggling just to pay rent and put food on the table," wrote Stiglitz. "By 2027, when the law’s provisions are set to be fully enacted, with the stealth tax increases complete, the country will be neatly divided into two groups: Those making over $100,000 will on average get a tax cut. Those earning under $100,000 — an income bracket encompassing three-quarters of taxpayers — will not."

By contrast, Stiglitz wrote, Biden's plan would reverse much of that damage. "Mark Zandi and Bernard Yaros of Moody’s Analytics have done the most credible and thorough analysis comparing the Biden and Trump plans, including Mr. Trump’s stealth increases and other promised tax and expenditure changes. Mr. Biden’s plan wins by an enormous margin: 7.4 million more jobs and a much quicker recovery from this recession. That means higher wages and incomes for most Americans."

"Elections gave Republicans the power to enact these tax shenanigans. Neither conscience nor principles stopped them," wrote Stiglitz. And unless Biden and a Democratic Senate are elected to stop it, he warned, "The increases, unfairly aimed at the vast majority of Americans who are disproportionately suffering in the pandemic, will cause even more hardship."