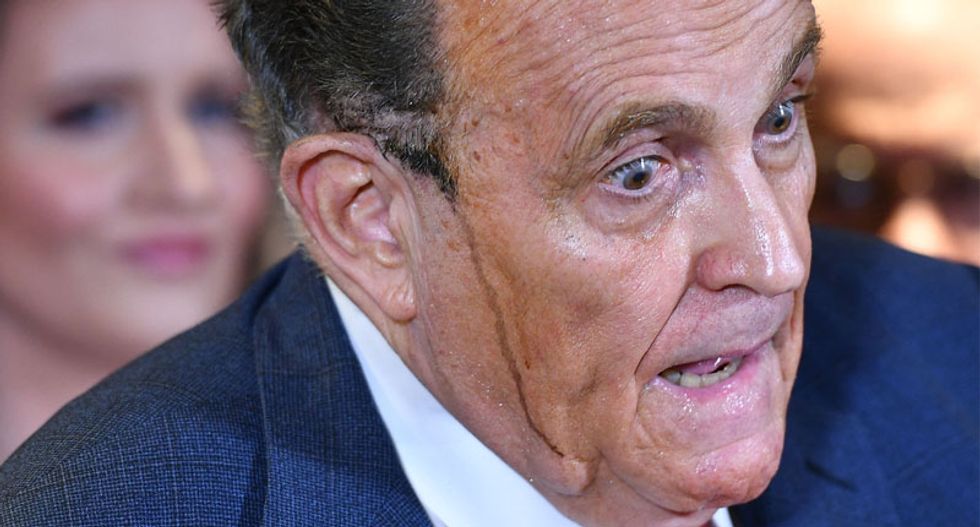 As if Rudy Giuliani didn’t have enough problems melting into a puddle of goo in front of the entire world, news comes today that he might not even be qualified to come on stage for Donald Trump’s twisted legal odyssey in Pennsylvania.

It turns out Giuliani doesn’t have standing as an attorney to participate in the appellate court proceeding there. And while Marc A. Scaringi -- the newest lawyer to hop aboard Trump’s clown car -- is asking the U.S. Court of Appeals Third Circuit to allow an exception with something called “pro hac vice” status for Giuliani, a chorus of more serious attorneys pounced on social media to ridicule the move.

For those of us lay people who might assume Giuliani would qualify for any title with the word “vice” in it, the website lawandcrime.com explains otherwise.

“According to the Third Circuit’s rules, pro hac vice admission is simply not available for Giuliani. It is available ‘only to attorneys who have been appointed by this Court to represent a litigant pro bono,’” the website reports. “Attorneys who are not representing a client pro bono [free of charge] “cannot appear Pro Hac Vice and must follow the standard admission process in order to enter an appearance with this Court.”

It continued, “As Law&Crime previously reported, Giuliani allegedly requested that he be paid $20,000 per-day to lead the Trump campaign’s legal efforts, an astronomical sum that would be the antithesis of pro bono representation. Though Giuliani denied he asked for that much in payment, he did confirm that he would be compensated by the campaign, telling the New York Times that he and the president would ‘work it out at the end.’”

Just as stunning, it appears that Scaringi has inaccurately portrayed Giuliani as being “admitted to the Second Court of Appeals,” which apparently is news to attorneys whose tweets were published by Law&Crime.com.

Perhaps most notable is this one from prominent appellate attorney Raffi Melkonian:

Ah, someone passed this along to me. Rudy isn’t admitted to the second circuit. I couldn’t find him on the list,… https://t.co/ltHWPL9SUs
— Raffi Melkonian (@Raffi Melkonian)1606313181.0

Melkonian was not alone in musing at the pitiful sight of Giuliani trying to use his former VIP stature to attain the equivalent of getting whisked through the rope line at a New York city nightclub:

They keep saying in pleadings that Giuliani is admitted to the Second Circuit, but he keeps not being on that court… https://t.co/9ZtR7GWKsq
— southpaw (@southpaw)1606315650.0

The allure of Rudy doing oral arg in the Third Circuit is nearly unbearable. But for the sake of society and sanity… https://t.co/agf7CpFPLS
— Scott Greenfield (@Scott Greenfield)1606314524.0

Even were Giuliani suddenly able to sprout qualifications to argue what’s left of Trump’s legal wreckage before the increasingly unimpressed appellate judges, there’s also the irritating detail cited by Law&Crime.com that there’s no substantive legal merit to any of this.

“Despite Scaringi’s plea for the case to be heard on the merits, the appeal before the court does not deal with the merits of the case; it’s only a request that the circuit judges direct the trial judge to allow the campaign to file a third complaint (second amended complaint) in its ongoing litigation in Pennsylvania.

“The campaign filed its initial complaint on Nov. 9 seeking to block Pennsylvania from certifying its election results due to widespread fraud, but quickly scaled back the lawsuit with a red-lined amended complaint on Nov. 15 that completely abandoned the unsubstantiated allegations of fraudulent activity.

“During that span, nearly all of the attorneys representing the campaign withdrew from the lawsuit, leading to Giuliani’s takeover and subsequent request to file a second amended complaint. U.S. District Judge Matthew Brann denied the request, leading the campaign to file the appeal.”

So while the world waits impatiently for Trump’s legal Nightmare Team to exit stage far right, we’ll just have to see if the Third District Court allows Giuliani to don his legal uniform. If it does, so be it.

Just don’t make us watch him tuck in his shirt again.