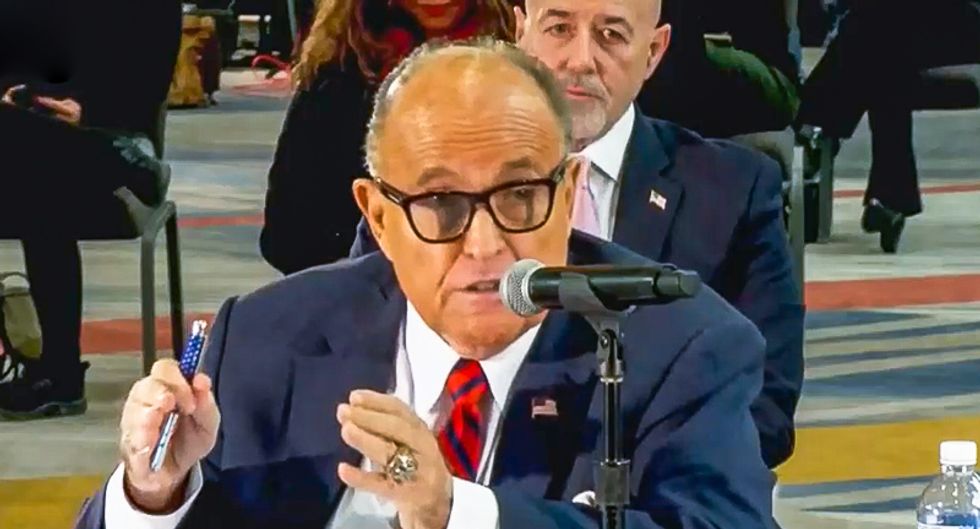 Rudy Giuliani, an attorney for President Donald Trump, on Monday suggested that the Arizona legislature should "take over" the state's election after claiming that the state has 5 million undocumented immigrants.

Giuliani made the remarks during a meeting with Republican lawmakers in Phoenix.

"If they can locate a sufficient number of illegal immigrants voting illegally, that would have a bearing on the outcome of the election," the president's lawyer said. "And they're going to certify the vote apparently without doing it. You would have to be an idiot not to think that illegal aliens and immigrants vote, right?"

"How many are there in Arizona?" Giuliani asked. "What's the lowest number? Can anybody help me with that? Five million, 4 million?"

"I wish we knew, sir," one of the lawmakers replied.

"What's the lowest number we could use?" Giuliani pressed. "Four million?"

State Rep. Kelly Townsend (R) asserted that there are as many as 36,000 people in Arizona voter rolls who "can't prove their citizenship."

Giuliani did not seem satisfied with that number.

"I may be wrong, but let's say there are 5 million illegal aliens in Arizona," he remarked. "It is beyond credulity that a few hundred thousand didn't vote."

"There is no question any reasonable person's mind that the vote totals contain large numbers of illegal votes from people who are not citizens of United States," Giuliani added. "And the officials certifying have made no effort to find out the truth, which, seems to me, gives the state legislature a perfect reason to take over the conduct of this election."

The Pew Research Center estimates that there are 275,000 unauthorized immigrants in Arizona.

Watch the video below from OAN.