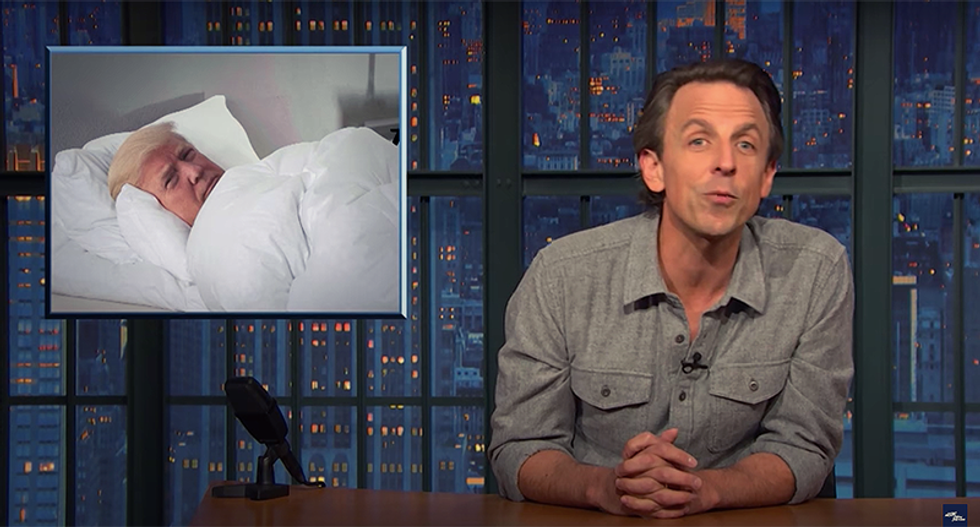 President Donald Trump hasn't surfaced from the White House in the past few weeks, except for a few rounds of golf. "Late Show" host Seth Meyers couldn't help but picture Trump hiding under a pile of blankets hiding from the world.

"Two weeks for a man who clearly loves talking to cameras. I mean, what's going on?" Meyers asked. "I'm guessing someone has to crack open his bedroom door every day at two in the afternoon and say to a lump of blankets, 'Mr. President? Mr. President, do you want to talk to the American people today?'"

"We think it would be a good idea," Meyers imagined Trump's staff says.

"Is COVID cured?" he thought Trump would say.

"Did we win Michigan?" Trump would ask.

"Oh," Trump might say. "Maybe we'll win it tomorrow. Hey, can I ask you something?"

"Yeah, I think so too," Meyers said with a chuckle.

Then when the Dow Jones Industrial Average climbed over 30,000, it seemed to reignite something in him. It was enough for him to pull some pants on and give an impromptu press conference that "seemed to be about nothing in particular, and it lasted almost exactly one minute."

Meyers said it was weird to see someone "that longwinded and self-obsessed keep his comments that brief. That'd be like turning to your uncle at Thanksgiving and saying, 'Paul? Do you have anything to add about paper straws or gender pronouns?' And Paul says, 'I'd only like to say this turkey is the bomb.' And we'd all give thanks for Uncle Paul finally discovering CBD gummies."