Prior to the end of the 2020 election, many conservatives started tossing around a provocative prediction: With Joe Biden's imminent and likely resounding win, Democrats may abruptly drop their objections to the Electoral College and learn to love it again. Among those putting their chips behind such a forecast was former Republican George Will.

"Joe Biden's victory, which will be decisive in the popular vote, will be even more so in electoral votes," he wrote in his column for the Washington Post on Oct. 30. "So, on Wednesday, many Democrats might have kindlier thoughts about the electoral college. Because Democratic candidates lost two of this century's first five presidential elections while winning the popular vote, many Democrats have called for abolishing the electoral-vote system and adopting election by direct popular vote. This year, the electoral-vote-inflation factor favoring Biden should have the wholesome effect of dampening Democrats' enthusiasm for abolition."

But while the predictions of Biden's victory have been vindicated, the Electoral College's reputation remains in tatters. In fact, it looks worse than ever before. It has brought us to the brink of catastrophe, and it urgently needs to be eradicated.

This point has become somewhat confused because of the order in which the media projected Trump and Biden as winners in each state and how the votes were tallied. Some have argued that, despite the disadvantage Biden faced because of the Electoral College's bizarre structure, the Democrat nevertheless achieved a decisive win.

Unfortunately, this is not so.

Here's how Josh Jordan put it, looking at the most recent margins in the key swing states (note: Biden's margin in Pennsylvania is still expected to grow significantly as outstanding ballots are counted, while the others are likely to be relatively stable):

Despite his claim, this genuinely was a very close race. At this time, Wisconsin appears to be the "tipping point state" — essentially, the state which gave Biden a decisive lead by the smallest margin. Biden only won there by about 20,000 votes, or a margin 0.3 points.

It's easy to imagine a scenario in which, for what ever reason, the shift of a several tens of thousands of votes — relatively few in the scale of the election and in terms of swings that the electorate experiences — in Wisconsin, Georgia, and Arizona flipped the states into Trump's column. Amazingly, that scenario doesn't make Trump the clear victor. It turns the race into a 269-269 tie: 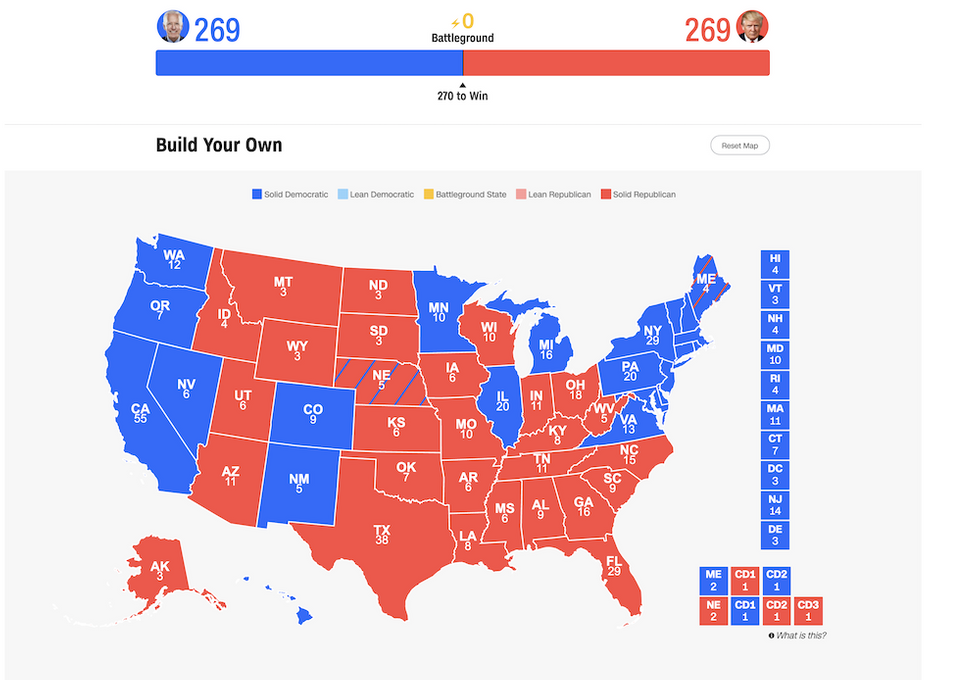 It's not clear why the framers of the Constitution left us with a system that allows for the possibility of an Electoral College tie (they figured out how to break ties in the Senate), but that's what we have. The consequence would be that all the states' results are essentially discarded, and the House of Representatives picks a president. But it doesn't simply give a vote to each member; each state votes in the House as a single delegation with one vote each. Because Republicans would control a majority of state delegations, they would likely give the election to Trump, though it's impossible to say how it would play out ahead of time.

In fact, it's even worse than that, because there's the possibility of faithless electors. While some states legally require electors to cast their ballots with the party that won the state, some are technically free to vote their consciences. This doesn't happen much because parties tend to pick loyalists who are committed partisans.

In a tight 269-269 split, however, it would literally take only one faithless elector to change history. Maybe that would be unlikely, but it would be awfully tempting. In 2020, it would mean that the race couldn't be called until the Electoral College actually met and cast its vote. Only once the votes were actually counted would we even know if the final decision for president would go before the House of Representatives, or if some random elector would decide the fate of the country on their own.

Under these circumstances, it's hard to be sure we could guarantee a peaceful transition of power.

But putting aside the mechanics and the risks of this case, it's important to dwell on how absurd and anti-democratic it is. According to FiveThirtyEight's Nate Silver, Biden is likely to end up with a lead in the popular vote of 4.4 points:

This means that, assuming Wisconsin was indeed the tipping point state, the Electoral College essentially had a 4.1 point bias in Trump's favor (or, more accurately, in favor of a tie result that likely would have resulted in a Trump presidency.) This should be unacceptable to a country that cares about the will of the people, fairness, and democracy.

In typical elections, a 2-points lead is often seen as relatively formidable and decisive. It's not a landslide, but it's not a squeaker, and no one really doubts that the winner has a compelling reason to claim a clear victory, assuming no malfeasance.

But in the presidential race we just lived through, Democrats were required to win over a majority of the country by a margin of more than 4 points — something they just barely managed to do. Another way of putting the point: Democratic votes simply count less than Republican votes under the current system when it comes to control of the presidency.

This imbalance is compounded by the fact that Donald Trump is only president at all because in 2016, there was a similar bias in his favor. Clinton won the popular vote 2.1 points, but lost because of Trump's slim leads in Wisconsin, Michigan, and Pennsylvania. That was, many argued, unjust.

Trump is a dangerous man and an incompetent president. For this reason, he's unpopular with a majority of Americans, and pretty much always has been in his political career. If the popular will mattered enough, he would never have gotten the job. And if it mattered just slightly less than it does now, or if Democrats were slightly less effective at fighting him than they were, he would have been able to hold on to power despite majority outrage and and opposition.

The situation wouldn't have been quite as bad, however — from the perspective of democracy — if 2016 had just been a fluke. Of course, it wasn't just a fluke; Al Gore lost the presidency while winning the popular vote in 2000, too (let's put aside the Florida recount and Supreme Court intervention). And now, as Biden's slim room for error makes clear, Democrats are playing on a highly unfavorable playing field. And it may not get any better — indeed, it may get even worse. This isn't a fluke or a glitch; it's systematic, unjust, oppressive regime.

Some might say that, regardless, of the bias against Biden, he and critics of the Electoral College should just be happy he won. Perhaps, they'd say, there are technical objections to the Electoral College, but in the real world, it mostly works out fine (2000 and 2016 notwithstanding.) But this argument misses the fact that, in order to win, Biden had to be hyperaware of the fact that the deck was stacked against him. There was a protracted debate during the campaign about the regulation of fracking, an important industry in Pennsylvania, which was believed to be a key swing state. And the state's outsized importance due to the Electoral College likely played a role in how Biden hedged on the issue during the debate, hedging that may box him in as president — undermining the preferences of the majority.

What's more, the president himself has, as of this writing, refused to accept his loss in 2020. While it's impossible to say what he would have done if the president were determined by the popular vote winner, it would have been much harder for him to protest the result under such a system. It would have been clear on the night of Tuesday, Nov. 3, that Biden was going to win the popular vote and the presidency and that Trump was the loser. The counting would have continued, as it did, but we wouldn't have had endless days of rolling results before a clear winner could be projected.

And Trump wouldn't have, as he does now, potential paths to undermine the result of the election. Despite his clear loss, Trump and his allies have been exploring multiple paths to his maintaining power, including inducing Biden electors to become faithless, convincing state legislatures to appoint slates of electors at odds with the voters' choices, or using lawsuits and recounts to overturn the outcomes in key states.

These ideas are all likely to fail, and Biden will be inaugurated. But another presidential candidate and their party may be better positioned to exploit these anti-democratic tactics in the future. And even the prospect that they could work is doing serious damage to the United States in the present.

None of these ideas would be viable if the popular vote determined the winner. They're only on the table because of the destructive and Byzantine Electoral College. If the country's leaders had enough sense and decency, they'd abolish the antiquated institution as soon as possible.