The Trump plan for mass death is unfolding before our eyes 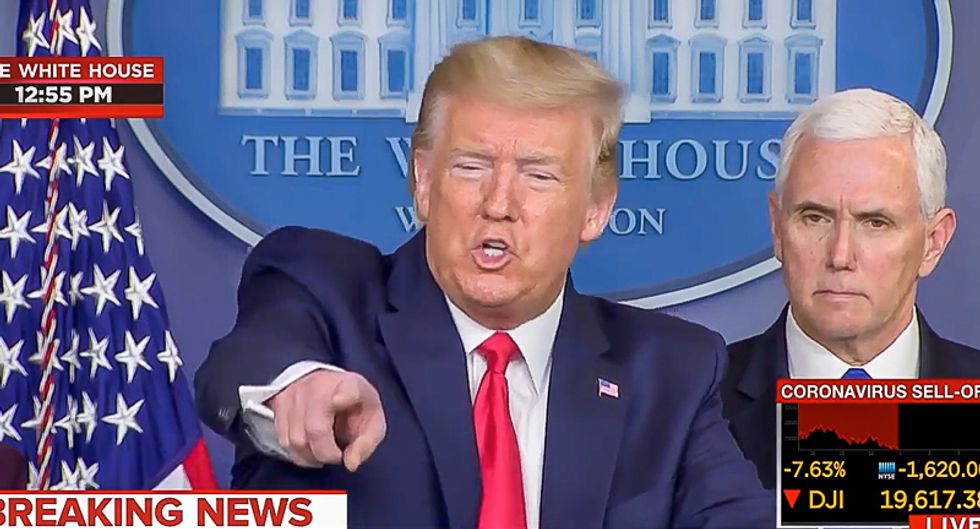 On Friday, the COVID Tracking Project reported that the number of positive coronavirus infections in the last day had reached 170,000, the highest record ever and a number that was, just a few months ago, hard to imagine. It's now our daily reality, and it's likely to only get worse.

Other figures are just as frightening. Hospitalizations — one of the clearest signs of the seriousness of the out break —have reached a new high at 69,000, according to the project. Deaths are at a disturbing 1,300, though that rate is almost certain to spike in recent weeks following the more recent spike in cases. And as the newest and largest wave yet engulfs the country, reports have begun to appear of hospitals being overwhelmed with patients, which is almost certainly a precursor to a spike in the case fatality rate.

It's our horrifying new status quo, and one that experts and observers have been warning would unfold this fall for months. But the mind-boggling truth is that for the Trump administration, everything is pretty much going as planned.

Ever since the first wave in the spring, President Donald Trump has seemed increasingly drawn to the so-called (and, indeed, misleadingly named) "herd immunity" approach to the pandemic. On this approach, you reject government restrictions meant to stop people from getting the virus. What advocates of this strategy believe is that it's best that more people get the virus, because eventually, enough people will have had it, they'll immune, and life will return to normal.

Trump brought on Dr. Scott Atlas, a radiologist and Fox News guest, to the White House team, because he advocated this approach and opposed restrictions. His views were at odds with the approach favored by the bulk of the health experts in the administration, but the president liked his ideas, so they have won the day.

The White House has occasionally denied or talked around the idea that it's intentionally carrying out a "herd immunity" strategy, but reporting has made clear the plan the administration has adopted. Per the New York Times:

The White House has embraced a declaration by a group of scientists arguing that authorities should allow the coronavirus to spread among young healthy people while protecting the elderly and the vulnerable — an approach that would rely on arriving at "herd immunity" through infections rather than a vaccine.

On a call convened Monday by the White House, two senior administration officials, both speaking anonymously because they were not authorized to give their names, cited an October 4 petition titled The Great Barrington Declaration, which argues against lockdowns and calls for a reopening of businesses and schools.

"Current lockdown policies are producing devastating effects on short and long-term public health," the declaration states, adding, "The most compassionate approach that balances the risks and benefits of reaching herd immunity, is to allow those who are at minimal risk of death to live their lives normally to build up immunity to the virus through natural infection, while better protecting those who are at highest risk. We call this Focused Protection."

The problem with this approach — the reason it's rejected by most of the public health community — is that it will lead to mass suffering and death. That's what the increase in hospitalizations is telling us. Medical researcher Dr. Atul Gawande made the point in a recent tweet:

But there's another important point. One crucial part of the "herd immunity strategy," in theory, is protecting the vulnerable. Since COVID-19 poses the most significant mortality risk to the elderly and people with other health conditions, advocates argue, this population needs to be kept safe while the virus spreads and creates immunity among the rest of the people.

As people like Alex Tabarrok argued early on, though, this tactic has little hope of success. You can't meaningfully isolate elderly people from the rest of society. What do you do with the grandmother living in a home with parents who are essential workers and kids who are back at school? What do you do with the workers a nursing homes, who have lives outside of work? Who will pay for people with chronic health conditions to stay home from their jobs for months on end?

It's untenable. And at the same time, the White House hasn't actually done anything to meaningfully protect vulnerable from the wave of the virus crashing over the country.

Trump has touted vaccines and therapeutics, including therapeutics that may have saved his own life when he was hospitalized with the infection. But there aren't nearly enough therapeutics for all the patients in need — nor the top-notch care the president received — and the vaccines won't be ready for full distribution into well into 2021. On Friday, Trump announced that the vaccines will be available in April, though he had previously said it could be distributed last month, in October, which never happened. And right now, the administration has no plan to stop surging virus. Most Republicans are following his lead, and even Democratic governors who might prefer to take a more aggressive approach are hamstrung by a lack of federal resources.

There is no plan to stop the virus. The federal government just intends to let it spread through all of us. It's a plan for mass death, because they don't care enough to stop it.