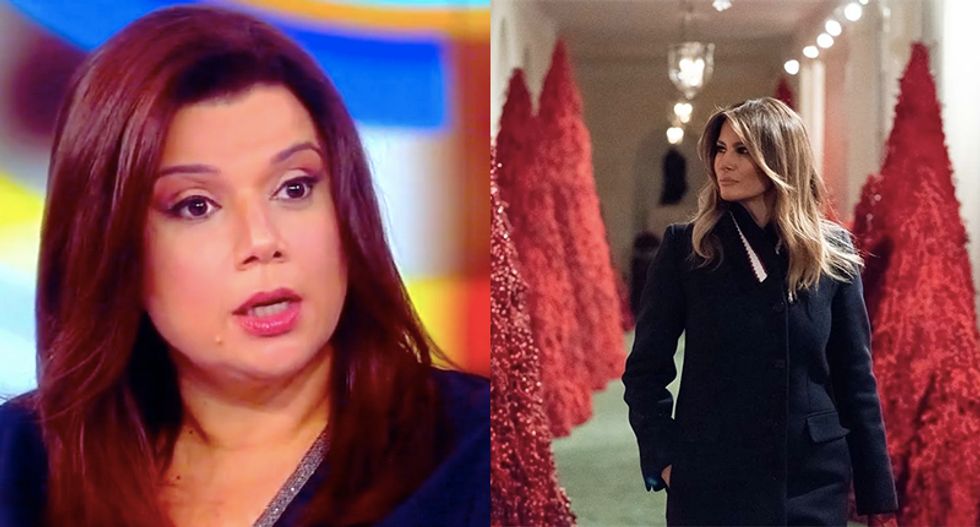 First lady Melania Trump was caught on tape by a friend ranting about Christmas at the White House. After years of conservatives alleging that liberals were engaging in a "War on Christmas," Melania ranted, "Who gives a f*ck about Christmas stuff and decoration?"

"I'm in the Christmas spirit!" cheered Republican strategist Ana Navarro, belting out, "Joy to the world, the Trump's are gone!"

Sunny Hostin confessed she's just happy that the national nightmare is finally over.

"I don't think she's had this big change of heart," Hostin said after viewing photos of the first lady receiving the Christmas tree. "I happen to love Christmas decorating. I think it would such an honor to decorate the White House. That's an iconic thing to do. Every time she decorated it looked like the Narnia ice queen. It was horrible all the time. Now we know why it was horrible. She didn't like to do it. I never heard a first lady or anyone else say, 'Who gives a blank about Christmas stuff?' We all care about Christmas stuff! Melania, you're the first lady! I have to agree. She's like the Grinch who stole Christmas decorations from the White House. I'm just happy this is over. I really am."

Sara Haines compared it to the "Instagram moment" vs. reality. On Instagram, the first lady is all smiles with the Christmas tree but behind the scenes, the reality is she's waging her own war on Christmas.

"Secretly taping the First Lady and willfully breaking an NDA to publish a salacious book is a clear attempt at relevance. The timing of this continues to be suspect - as does this never-ending exercise in self-pity and narcissism," Melania Trump's chief of staff Stephanie Grisham said in a statement.