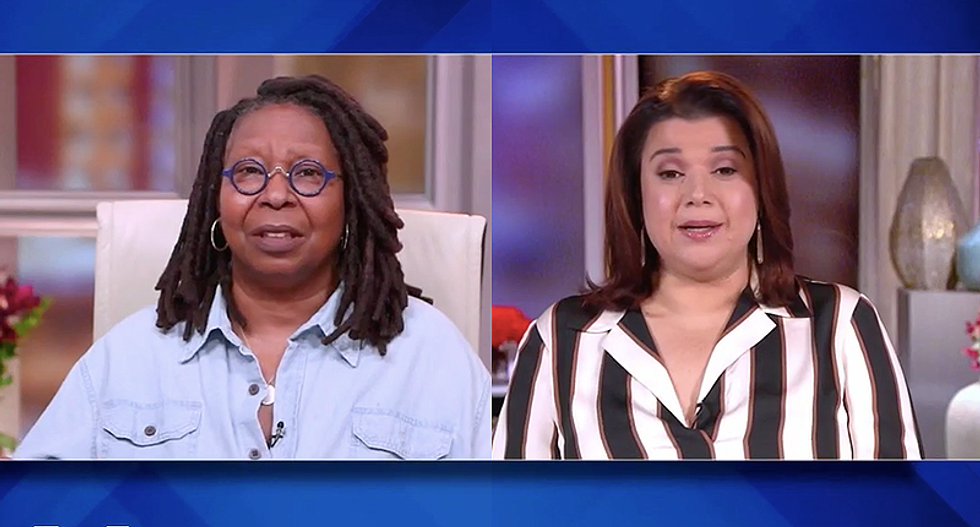 The hosts of "The View" attacked President Donald Trump for demanding credit for the COVID-19 vaccines "on my watch" while refusing to accept accountability for the huge number of Americans who have died.

Co-host Sunny Hostin confessed that she's concerned as the virus reached 11 million total cases in the United States since the pandemic began. In the past week, there were over 1 million new infections reported. Thus far there have been more than 246,000 people who've died in the U.S. from COVID-19.

"I think all of that falls squarely on the shoulders of this president, and this president's administration and the fact of the matter is he shows over and over again that he cares more about his personal legend in his own mind rather than the American people," Hostin said. "It's just so obvious to me."

She noted that it's concerning that Trump is refusing to have a peaceful transition of power at a time that Americans need it most.

Joy Behar agreed, saying that Trump is responsible for the overwhelming number of cases.

"We're number one in the world with the most coronavirus in the world," said Behar. "I mean, I put it right at his feet, frankly. You know what's scary -- I'm thrilled about the vaccines of course because that means we're really going to be out of this soon, but there's a piece in The Times today about how thousands of medical doctors are resigning and medical practices are closing. Doctors did not want to take a chance on their health. These people who defy the protocols are going to be in a pickle when they get sick and nobody is in the emergency room. When they have an appendicitis attack or their children get sick, no one will be there for them."

She went on to say that the Republicans in Congress don't care about the problems Americans are facing because the only thing that matters to them is "power, retaining it and nothing will change until the Georgia election."

Whoopi Goldberg wondered why Republicans aren't thinking about getting their act together for people coming out to vote in the Georgia special election.

Republican consultant Ana Navarro agreed, saying that she's glad Trump brought up the idea of "historians" because he finally realizes that he and his presidency is going to go down in history as a failure.

"And if Republicans are concerned about how they're going to go down in history, he's going down as a whiney, crybaby narcissist because he could not hand over power because he could emotionally and psychologically process that he lost," said Navarro. "That's how he is going to go down, as a guy who left the office having a tantrum and impeding the next president in the midst of a pandemic and a national cries from and taking over and having a seamless transition."

She cited General Services Administration chief Emily Murphy, an "obscure bureaucrat political appointee" who is blocking the transition, and said that Congress needs to step in and change that so that the American government isn't "held hostage by a madman president and his sycophants and political appointees."

Sara Haines found it surprising that Trump would want to take credit for a vaccine for a virus he downplayed from the beginning.