‘This has got to be demoralizing for Republicans’: Analyst Charlie Cook gives final 2020 preview 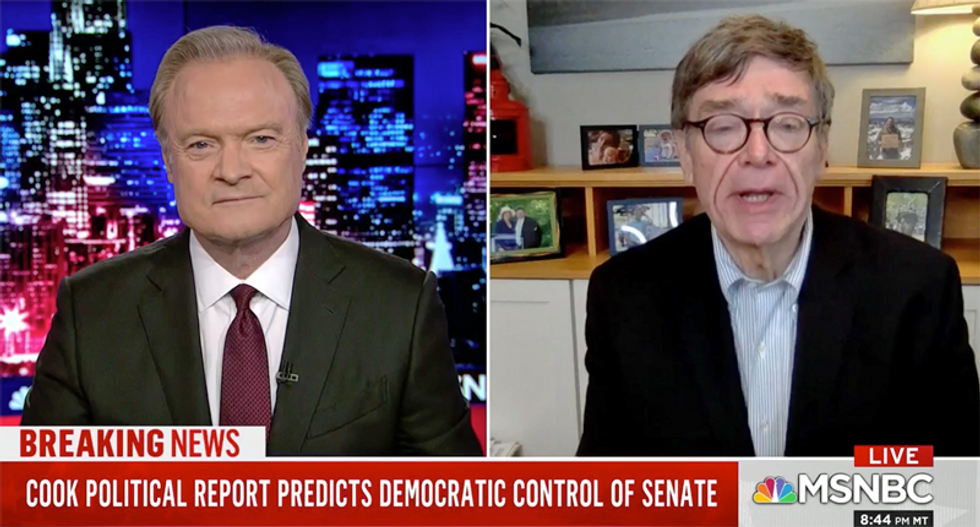 "On nights like this, everyone in Washington wants to know, 'what does Charlie think?' Charlie Cook is Washington's most experienced election analyst who always has the sharpest focus on the balance of power in the House of Representatives and the Senate, and the individual elections that can change those balances of power," O'Donnell said.

"Charlie Cook is a meticulously careful analyst whose judgments are never influenced by partisanship, just the facts he finds in the data," O'Donnell continued. "In the presidential race, Charlie Cook is now saying with something close to certainty that Joe Biden will win the election and the only question now is whether it will be a narrow win or a landslide. Charlie Cook says a landslide is more likely."

"He expects Democrats in the House of Representatives to pick up more seats to strengthen their majority, by about ten more seats," he continued. "And the United States Senate, which will be my focus of coverage tomorrow night, Charlie Cook says the Senate is increasingly less the case whether Democrats will take a majority, but how how large it will be."

"The reason I will have a good sleep tonight -- I always trust the judgment of Charlie Cook and I recommend you do the same," O'Donnell added.

"So in terms of most likely flips from Republicans to Democrat, you're looking at the most likely are Colorado and Arizona in your view?" O'Donnell asked.

"I would throw North Carolina in," Cook replied. "This has got to be demoralizing for Republicans, is when a Democrat is ahead 5 to 7 points and has a sex scandal in a southern state and it knocks maybe two points off."