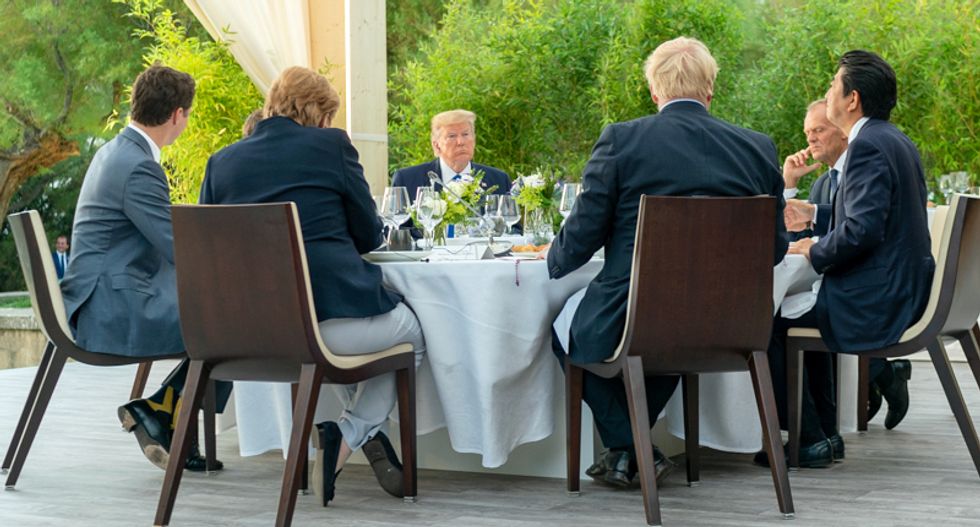 Just when you thought a deflated Donald Trump might just leave us all alone on his final Thanksgiving sullying the White House, one of his very favorite opportunities to enflame America’s divisions came along and he couldn’t help himself.

NFL Quarterbacks Deshaun Watson of the Houston Texans and Matthew Stafford of the Detroit Lions both took a knee today during the National Anthem before their game on national TV. So, after a period of four hours of not tweeting anything, the Agitator in Chief assumed the position with this statement of “No Thanks”-giving:

And with that flip of a tweet, you could just hear the sweet sounds of family members and friends screaming at one another from sea to shining sea. Nothing works better to end all those family truces about not talking politics than an inflammatory tweet from Trump about athletes disrespecting our flag during a football game being watched by millions.

On the bright side, Watson and Stafford might have inadvertently spared the world from an international military crisis: Psychiatrists warn that more than four hours of not getting attention can be triggering for someone suffering from Narcissistic Personality Disorder.

Giving Trump a twitter binky is a hell of a lot smarter than having him order, say, the carpet bombing of the entire African continent to get even with Black Lives Matter. We’ll take tens of thousands of angry likes and emotional retweets rather than a little old-fashioned American carnage with our pumpkin pie.

Apparently, it worked out for all concerned. Once Trump was coaxed from his bunker by the smell of raw meat at an NFL game, he was back to his old self, binge tweeting all sorts of nonsense and grievances. Which means he wasn’t distracted by national security matters.

It also provided a fine opportunity for Americans to hone for the holidays their social-media skills. Here’s a sampling of the responses:

@realDonaldTrump How did your football team the Generals do? Oh that’s right, you bankrupted it. https://t.co/C1BnWpjkRY
— Hoodlum 🇺🇸 (@Hoodlum 🇺🇸)1606423282.0