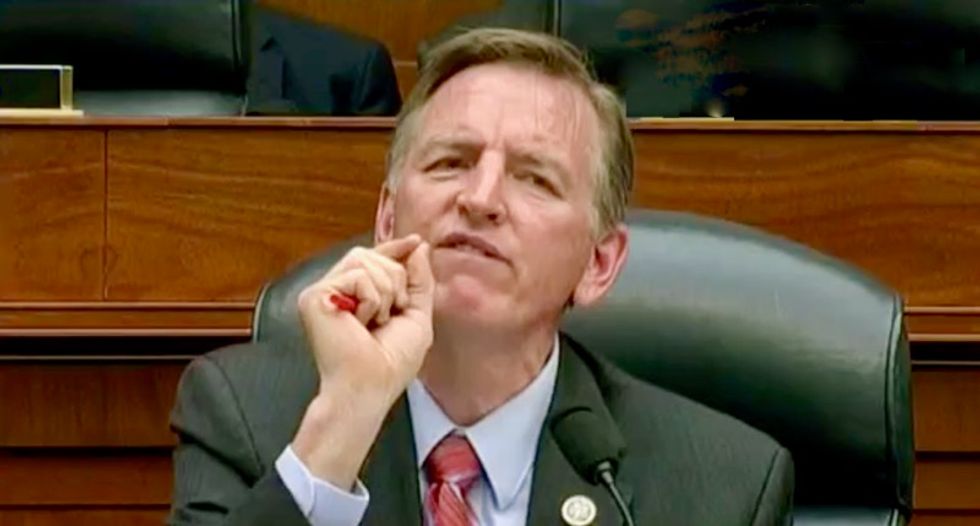 The first thing you should know about Rep. Paul Gosar of Arizona is that he shouldn’t be confused with the famous movie villain from “Ghostbusters.”

One of them has been described as a “sadistic, shapeshifting, apocalyptic, cosmic entity.”

The other spelled his name differently and wasn’t a registered Republican.

Paul Gosar is no relation of Gozer the Gozerian. But he’s doing his best movie-villain schtick as part of a cottage industry of loyal subjects vying to carry on the manic mantle of Trumpism.

Gosar’s trolley most recently came off the tracks with this amazing tweet yesterday, suggesting that Republicans model themselves after one of America’s enemies from World War II.

Yes, Gosar is imploring his fellow Trumpsters to hang on like that great Japanese war hero who didn’t surrender almost three decades after the war. By then, the American culinary scene was becoming graced with thousands of great sushi restaurants, so Teruo Nakomura didn’t get his due until now.

Gosar’s tweet honoring the memory of soldiers who our Greatest Generation died fighting wasn’t all that out of character. This is, after all, a man whose reelection campaign for Congress in 2018 provoked an ad opposing his candidacy from six of his nine siblings.

"A family defends its honor," brother David Gosar, a lawyer, declared, "We've got to stand up for our good name. This is not who we are."

That may be, but it’s pretty clear who Gosar is. Perhaps his first 15 minutes of fame came in 2015, when he distinguished himself, in a sense, as the only member of Congress to boycott an address by Pope Francis, who he had accused of having  “adopted all of the socialist talking points, wrapped false science and ideology into 'climate justice.” Gosar fundraised off his pigheadedness.

"When the Pope chooses to act and talk like a leftist politician, then he can expect to be treated like one," Gosar proclaimed in an email

When a Congressman chooses to act like a lunatic, then he can expect to get retweeted by a former reality TV star. As part of Donald Trump’s morning virtual pout, Gosar received the highest civilian honor of for a wingnut, as he made the feed:

Do not read this affidavit from an IT expert. We know what is documented here is impossible as the Maricopa County… https://t.co/m8drbNMJu0
— Paul Gosar (@Paul Gosar)1606104759.0

Yes, it turns out that the Republican-dominated Maricopa County Supervisors are apparently part of the Leftist conspiracy to destroy all that is good in the world. Like that radical Attorney General William Barr, who Gosar attacked just three days ago, suggesting a “Silver Alert” and “welfare check” on Trump’s very own Roy Cohn:

It’s fair to say that as Trumpism survives Trump, Gosar will emerge as an esteemed leader of the twisted tribe. He certainly has been burnishing his wingnut credentials: Last month Gosar was one of just 17 Republicans in the House refusing to vote to condemn QAnon and reject its conspiracy, at least one of which he once “accidentally” retweeted.

That fits nicely with a rap sheet after just three terms in Congress that includes, but is not limited to, outright climate denial, unbending opposition to legalizing Dreamers, demanding the impeachment for “high crimes and misdemeanors” President Obama’s EPA administrator Gina McCarthy for--among other atrocities--opposing private drilling for gas, oil and minerals on National Park land and for leading a one-man charge to reinstate disgraced racist Rep. Steve King.

That certainly is a partial list. So expect to hear the name Paul Gosar quite a bit in the coming weeks, months and years as Republicans scramble to carry forth the mantle of the Orange One. When that happens, perhaps this jingle will spring to mind:

“Who you gonna call? Ghostbusters!”