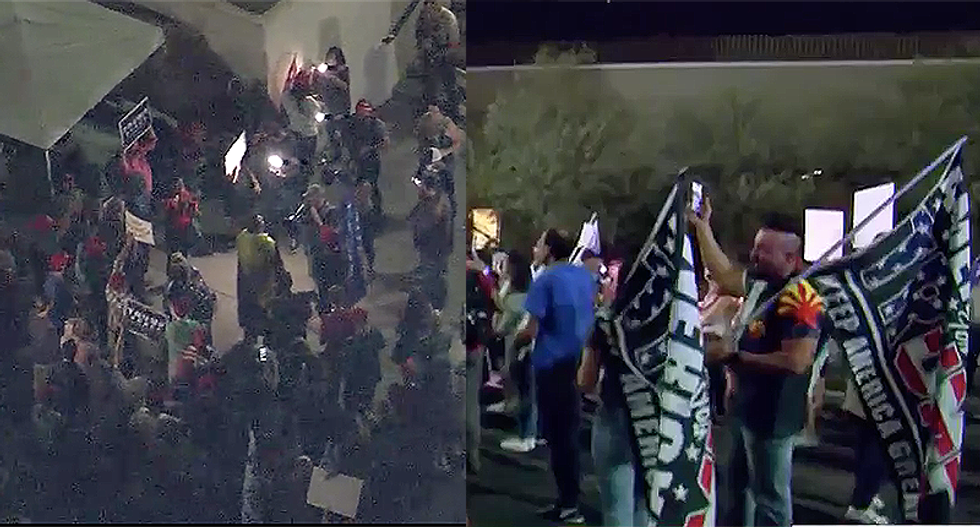 President Donald Trump's supporters flocked to the state capitol and the elections headquarters in Phoenix, Arizona on Wednesday night to protest the counting of the votes.

Arizona was called by Fox News' data analysts on Tuesday night, and Trump was so furious he called the network's chief personally to complain that it be retracted. The Trump supporters were chanting "Fox News sucks!"

Earlier in the evening, people with cell phones claiming to be "journalists" broke into the Maricopa County Elections Department to demand that they be allowed into the building. At least two of them weren't wearing masks and couldn't provide press credentials, but officials agreed to talk to them outside, which didn't go over well, according to MSNBC's Gadi Schwartz.

The staff inside the elections headquarters had to be escorted by police to safety after their shifts were over.

See some of the photos and videos below:

As counting of ballots continues inside this Phoenix building, Trump supporters protest what they believe is suppre… https://t.co/pQ9m1QTgwv
— David Common (@David Common) 1604547356.0