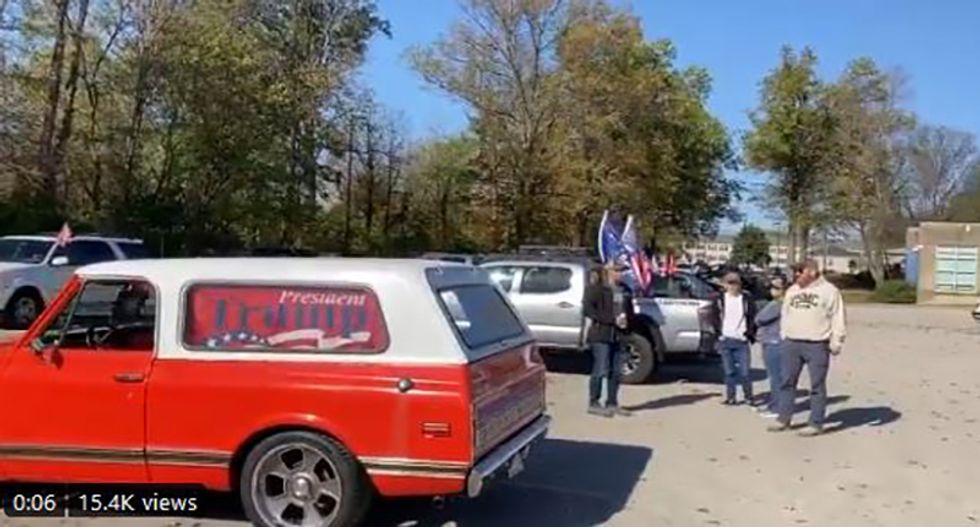 An estimated 1,000 Trump supporters gathered on school grounds in Jefferson County, Kentucky, for a heated event Sunday afternoon where they brandished guns illegally. No one was charged.

Unlawful possession of a firearm on school property is a felony in Kentucky, according to state statutes, and is applicable when an individual "knowingly deposits, possesses, or carries, whether openly or concealed, for purposes other than instructional or school-sanctioned ceremonial purposes." This equates to guns being allowed in cars on school property, but not brandished or removed from the vehicle while on school property.

"At least one held a gun as he ushered cars around protesters who were attempting to prevent the Trump supporters from leaving, while a number of anti-Trump protesters were carrying guns as well," The Louisville Courier reported.

Jefferson County Public Schools representatives were not contacted before the gathering took place, spokeswoman Renee Murphy said on behalf of the district. The Middletown Police were also not contacted. The only reason they knew about the incident was because four officers drove past the scene and decided to stop.

"We discovered the Trump rally by literally seeing a traffic jam on Old Shelbyville Road," Middletown Police Chief Rob Herman said. "The officers, seeing that, went to investigate and discovered that there was a Trump rally. We did not know there was going to be any type of rally yesterday. We were kind of caught off guard."

Herman said his department chose not to charge Trump Train supporters in the skirmish because he wanted to "diffuse everything."

"Our ultimate goal was to defuse the whole situation and try to de-escalate the rising tensions that were occurring between both parties. That's when both parties produced a long gun," Herman said Monday morning. "... No one pointed any guns at anybody, that I know of. So when the guns did produce, it was better just to keep everybody leaving — exiting the property — and defuse everything than it would have been to shut everything down and try to cause a larger skirmish."

One person was taken into custody. Kaileigh Robinson, 27, was said to be "antagonizing and causing public alarm" by grabbing an American flag on a passing vehicle and standing in the street, according to her arrest citation. She's been charged with disorderly conduct, menacing and disregarding traffic regulations, court records show.

A man with a gun now ushering drivers through the school’s grass after one of the counter protesters stood in front… https://t.co/lQ5iEskqR0
— Emma Austin (@Emma Austin)1604259104.0