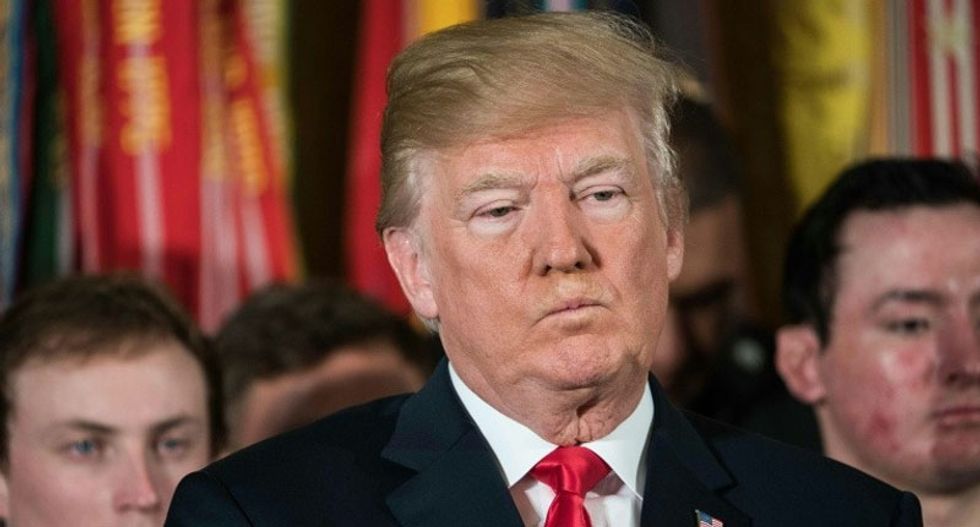 Caveat: As I'm writing this on Thursday morning, I don't know how this election will end. Joe Biden could be declared the winner today — but there remains a chance that Donald Trump can pull this out thanks to traditional Republican methods of vote suppression, rather than his ham-fisted coup attempt.

On Wednesday afternoon, word went out on social media: A group of MAGA yahoos were outside the Philadelphia Convention Center. They were there to offer backdrop to Rudy Giuliani, Eric Trump and other members of Trump's reality-TV Oberkommando. The authoritarian Klown Korps had been flown in to give speeches echoing Trump's demands that the vote-counting happening inside be halted — not for any vaguely legitimate legal reason, but simply because he likes the numbers where they are.

But the plan hit a snag: The good people of Philadelphia, who also know how to read a press release and were not interested in letting the second-born failson and a martini-soaked former Lifelock spokesman do a photo-op menacing the dutiful election officials who are just trying to count the votes.

A crowd of protesters showed up, chanting "Count every vote!" Eric and company turned tail and ran to their safe space, to give their dumb speeches outside the charter plane section of the Philadelphia airport.

In all the post-election chaos, that incident didn't really register on the national news, but on the ground here in Philly, it felt like a perfect distillation of how Trump's attempted coup is going: About as well Pinky and the Brain's various schemes to take over the world.

It turns out that President Bleach-Injector's ideas on how to depose democracy are — shall we say? — underdeveloped. His main weapons appear to be whining and making comically obtuse proclamations on Twitter, in the vain hope that someone mistakes them for law.

It started at 2:30 a.m. on Wednesday, when Trump, reportedly against the advice of his campaign team, gave a speech baselessly declaring the election a "fraud" and declaring himself the winner.

It didn't take, resulting in a whole lot of online mockery and every reputable news source — plus Fox News, which is not one of those! — informing America that none of it was true. So he kept at it on Twitter, letting loose a series of conspiracy theories that Twitter immediately put behind content warnings.

Apparently unclear on why democracy wasn't ending simply on his say-so, Trump let loose with this partially-polished turd on Twitter: "We have claimed, for Electoral Vote purposes, the Commonwealth of Pennsylvania (which won't allow legal observers) the State of Georgia, and the State of North Carolina, each one of which has a BIG Trump lead. Additionally, we hereby claim the State of Michigan, if, in fact,....."

The result was another Twitter warning and the internet whiling away the hours dunking on President Hereby-Pants.

It's been widely understood for weeks, if not months, that Trump intended to stage a coup the second it looked like he might not win this election, mostly because he kept bragging about his plans. Many activists, politicians and journalists — including me — worried that he might pull it off.

After all, Trump has considerable advantages when it comes to pulling off a coup. He has stocked the federal bureaucracy with cronies who were ready and eager to help him steal this election — including a postmaster general who barely bothers to hide that he's trying to slow down the mail and an attorney general who has eagerly joined Trump's efforts to delegitimize mail-in ballots. Trump also has a Republican Senate that has so far backed his every play, no matter how corrupt or even criminal, to hold on to power. He has hundreds of state-level Republican politicians willing to pull all sorts of strings to help him. (Which is one reason why Trump performed much better than expected in some states — voter suppression works.) And he has a 6-3 conservative majority on the Supreme Court, one that is hostile to the very concept of voting rights. To ice that particular cake, a number of those justices — including Trump appointee Brett Kavanaugh — have made it clear they were willing to entertain ludicrous legal arguments to throw out legitimate ballots.

But Trump just can't get out of the way of all the people ready and willing to help him steal this election. His stalwart belief that he knows better than the experts and that any problem can be met with more bluster and bullshit is, once again, breaking a system that, if he'd just left it alone, might have actually worked for him.

This is how he kept failing at business. Trump was basically handed a billion dollars in free cash — first by his father and then through his time on "The Apprentice" — over the years. He could have stuffed that money in a mutual fund, spent the rest of his life playing golf, and been rich beyond most people's wildest imagination. Instead, Trump insisted on burning through all that dough on a series of bad business decisions, putting him anywhere from $400 million to over $1 billion in debt.

Similarly, if Trump had reacted to the coronavirus by stepping aside and letting the medical experts, some of whom still exist in the federal government, do their jobs, it's likely that the pandemic would be far better controlled. He would have enjoyed a ratings boost that would have helped his re-election chances. Instead, Trump meddled every step of the way: undermining testing, insinuating that the whole thing was a hoax to hurt him, mocking people who wear masks, encouraging people to ignore social distancing and pushing snake-oil "miracle" cures, and even one point, pondering whether injecting oneself with household cleaning products might be the magic bullet.

Thankfully, Trump's insistence on mismanaging his affairs appears to be undermining his own efforts at a coup. The original plan was clearly to cough up some dense legal language that made it sound as if there were legitimate constitutional concerns that counting all the votes would somehow imperil our electoral systems. It would be total nonsense, of course, but the rebuttals would also come from lawyers talking legalese, causing most of the public to view the whole thing as an impenetrable legal dispute rather than an outright assault on democracy.

Instead, Trump is out there tweeting stuff like this:

That would seem to undercut any plausible deniability that this is about anything but Trump's belief that the only votes that should count are votes for him. Even the biggest right-wing hacks in the judiciary like to keep up the pretense of being honest actors, and Trump chips away at that every time his stubby fingers grapple with the Twitter app.

Even the biggest doofuses out there are struggling to pretend there's some legitimate argument behind Trump's whining. Which explains how the pro-Trump protests so far seem like they got dumped directly out of the clown car:

This isn't over, to be sure. Trump still has a lot of powerful, intelligent and deeply evil people in his camp who have, at least until now, been shameless about saving this idiot from his own incompetence while running his corrupt schemes. (See: Trump, Donald, impeachment trial of.) But so far, Trump's efforts to steal this election seem to be backfiring, in large part because he can't hold it together well enough even to pretend he has a legitimate argument. His compulsive need to get in his own way and make everything worse for himself may end up saving our democracy.