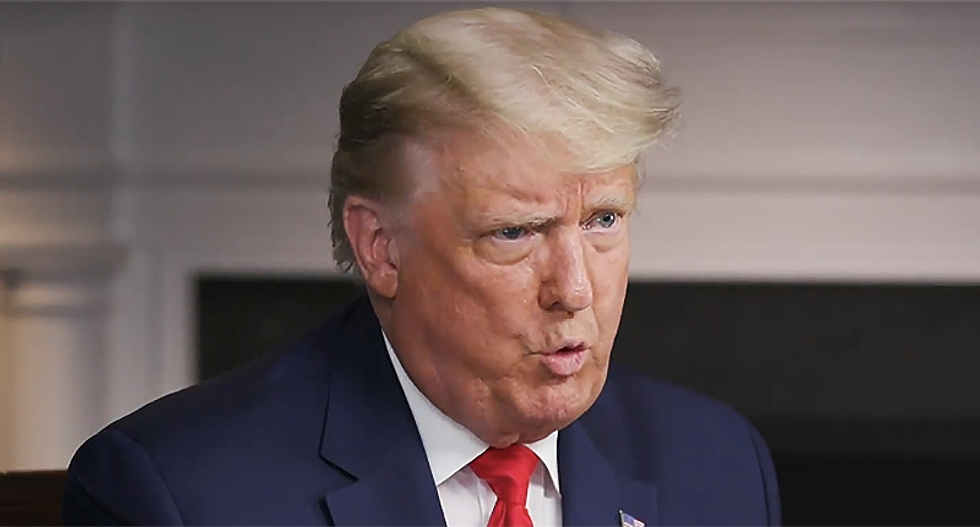 President Donald Trump's financial documents were never fully disclosed despite numerous lawsuits and subpoenas that went all the way to the U.S. Supreme Court. But one fact remained unchecked and unknown by the electorate: who gave Trump the money for the Trump International Hotel & Tower in Chicago?

Forbes crafted the Election Day report citing unanswered questions from the New York Times, Wall Street Journal and Washington Post. Trump hasn't answered any inquiries. His campaign refuses to even entertain financial inquiries. So, voters still have no idea where this secret cash fund came from.

"The clearest indication that something strange is going on in Chicago comes from the president himself." said the report. "On September 21, 2015, Donald Trump picked up the phone and called the editor of Forbes magazine, who had just spent several hours with him, listening to the Republican frontrunner pump up (and lie about) the value of his assets in an attempt to climb higher on the annual Forbes 400 list of America’s richest people."

The editors wondered what could possibly be so important that Trump would rush to them with further statements. It was the Chicago project, the largest tower he's ever built. But instead of promoting it as he typically does, he was hoping to make it disappear.

“If you want to mark it at zero, that’s okay,” Forbes recalled Trump saying multiple times.

"Trump, who is known not to use email, followed up by faxing a handwritten, all-caps note scrawled in black marker," the report explained. "Between a couple of Trumpian boasts—suggesting Forbes was undervaluing his brand by billions and noting Trump Tower’s 'GREAT LOCATION'—the future president reiterated: 'CHICAGO CAN BE $0—(ZERO).'”

Trump has spent the majority of his life trying to seem like he's richer than he really is, so why would he be trying to downgrade one of his projects? It didn't make sense.

The building opened in 2009 as the worst recession in decades was in full swing. "Trump defaulted on a $640 million loan, according to his lender," the report continued. "Rather than back down, he sued his creditors, seeking $3 billion in damages. He claimed his lender Deutsche Bank helped 'set fire' to the economy, which he called the equivalent of 'having torched the building.'”

Deutsche Bank countersued and revealed that Trump had "personally guaranteed" the project. Trump found $99 million of new debt from the very bank, but this time it was a different division within the bank.

"Fortress Investment Group also had a loan against the project, a $130 million note that was junior to the Deutsche Bank financing—and therefore more vulnerable," Forbes explained. "Court filings suggest that interest and fees accrued on the loan, bringing the amount outstanding to roughly $150 million by March 2012."

The company then let Trump buy back the debt for three-times less than it paid at just $48 million. That put Trump's financial liability to just a little over $100 million instead of $640 million. In his 2015 financial disclosure forms, Trump said he has two points of financial liabilities: over $50 million for the Chicago tower and $45 million to Deutsche Bank.

Suddenly another company stepped in, Chicago Unit Acquisition LLC, which Trump indicated he "owned" on his financial disclosure. So apparently one Trump company was lending to the other to cover the Chicago tower. Given that the debt was over $50 million it would make sense that the credit liability was also $50 million. But Trump showed it at just $1,001 to $15,000. Since then, Trump has listed the finances at zero. The debt just magically disappeared.

“There should be an offsetting entry somewhere,” Forbes cited Harvard real estate professor Richard Peiser. “I can’t explain that.”

Trump explained that he “bought this particular loan back from a group of banks several years ago. Instead of retiring it, he decided to keep it outstanding, and he pays interest on it to himself," reported the New York Times.

But he didn't do that according to his financial reports. So, either he's lying on the financial report or he lied to the Times. When they probed him further, Trump claimed, “We don’t assess any value to it because we don’t care. I have the mortgage. That is all there is. Very simple. I am the bank.”

That's not the only inconsistency, however. Forbes explained that in documents filed last year in the U.K. Trump showed that he loaned about $200 million to two overseas golf resorts. The debt for those has never been reported on any of his financial disclosures. In 2018, Forbes did 200 interviews with months of reporting trying to find where the money was. No one could give an answer.

One New York accountant had a theory. According to Mark Feldstein, “It would be a way to disguise who he is borrowing from."

Mother Jones did two reports on the magic money. One in 2017 said the loan could have been from a secret lender and the second, in 2019, speculated Trump was using the new LLC as part of a fraud scheme.

"The Internal Revenue Service generally requires borrowers to treat canceled debt as income, forcing them to pay taxes on the amount of money forgiven," said Forbes. Mother Jones "suggested Trump could have acted like the debt was still held by Chicago Unit Acquisition LLC and therefore avoided tax payments.

The New York attorney general is zeroing in on where the money is as part of her probe into the Trump Organization's finances. But when they asked Trump chief financial officer Allen Weisselberg about it, he wouldn't say much, a court filing said.

When the New York Times got Trump's financial documents, they found that the president showed "$287 million of income from canceled debts in Chicago." Trump barely paid any taxes on it, however, because he offset it with losses.

"Nonetheless, the revelation that he declared income from forgiven debt in Chicago casts doubt over the idea that Chicago Unit Acquisition is a vehicle to hide liabilities from tax authorities," said Forbes.

It doesn't explain where the money came from, however. When Forbes asked a Trump Organization executive about it, he said his phone was breaking up and the call ended.

Read the extensive report at Forbes.