WATCH: Michigan SecState why she is counting all the votes instead of letting Trump call dibs 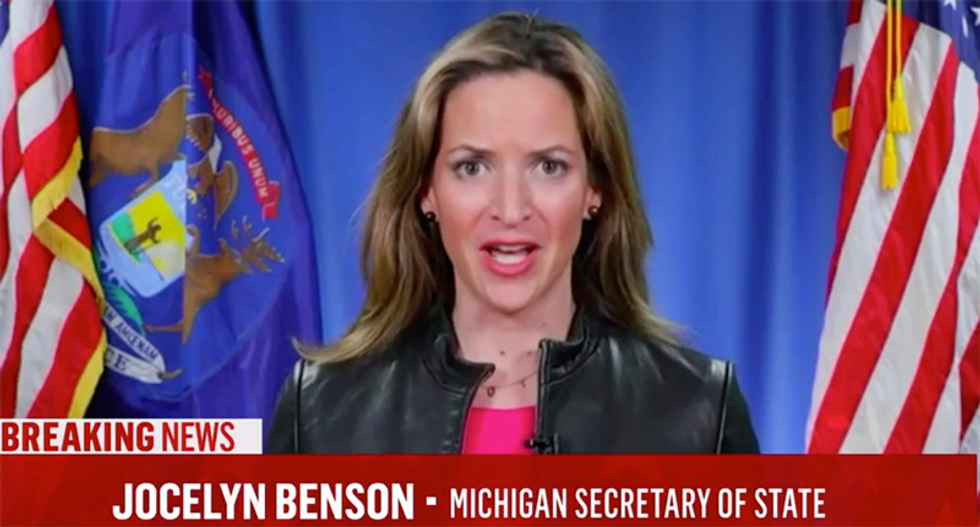 Secretary of State of Michigan Jocelyn Benson on MSNBC (screengrab).

Michigan Secretary of State Jocelyn Benson explained why she was not worried about efforts by the Trump campaign to block the counting of votes in her state.

"President Trump’s reelection campaign said Wednesday it would launch a legal blitz to try to halt vote-counting in Pennsylvania and Michigan and would seek a recount in Wisconsin, threatening to draw out the final results of the razor-thin White House contest," The Washington Post reported Wednesday. "In a series of rapid-fire announcements throughout the day, Trump campaign officials said they planned to file suits to halt vote-counting until more access is granted for Republican observers in Michigan and Pennsylvania; seek to initiate a recount in Wisconsin; and intervene in litigation pending before the Supreme Court over Pennsylvania’s extended deadline for mail ballots."

Benson was asked about the lawsuit during an interview with MSNBC chief legal correspondent Ari Melber.

"I'm holding this brand-new lawsuit," Melber said, holding up a document. "You are named as the defendant, Jocelyn Benson, in your official capacity. I suppose we begin with a lightning round and then give you time to give us a more lengthy consideration of the issues but yes or no, does this suit change any of the counting processes thus far that your state is doing?"

"We've got a transparent, secure, meticulous process. We'll continue to count every vote and ensure that every valid vote is counted," she explained.

Melber also asked about Trump's tweet attempting to call dibs on Michigan's electoral votes, which are projected to go to Biden.