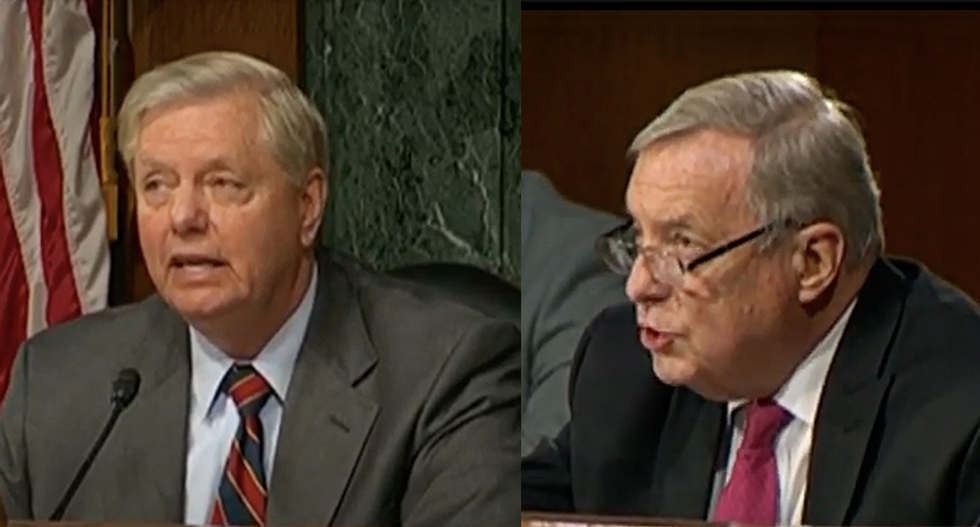 Sen. Lindsey Graham (R-SC) was attacked in a Senate hearing on Tuesday with the allegation he was only holding the event with former FBI deputy director Andrew McCabe to appease President Donald Trump.

There was a Senate report that undercuts Trump's claims about McCabe and Trump's conspiracy theories that President Barack Obama was wiretapping him or that Obama-era officials were trying to destroy his presidency.

"Anyone that has tuned into this hearing has the right to be confused," said Sen. Dick Durbin (D-IL). "If you were told this is a hearing on a presidential election, it's true, but not the one that occurred a week ago. We are talking about a presidential election and campaign four years ago. Yes, we are focusing on a presidential election, but we are examining for the fourth time the role of Russians in the 2016 election four years ago. And more importantly, we are discussing President Trump's conclusion despite intelligence evidence to the contrary that the Russian collusion was a hoax. For this Senate Judiciary Committee, it's all about Hillary, it's all about outgoing President Trump's bizarre ideas, and it's all about his doubts about that election."

He noted that while Republicans continue to focus on Trump's conspiracy theories, the United States is suffering under the frightening impact of the coronavirus pandemic.

Graham responded with his own rant, saying that former Trump adviser Carter Page was unfairly targeted using a warrant application to the FISA Court with inaccurate information.

"I think it's important to have everyone who signed it say, if I knew then what I know now, I wouldn't have signed it," said Graham. "To me, it's pretty stunning. The committee on September 9 received direction from [DNI John] Ratcliffe that the CIA informs the FBI that candidate Hillary Clinton approved of a plan concerning U.S. presidential candidate Donald Trump and Russia (sic) hackers hampering U.S. elections as a means of distracting the public from her use of a private e-mail server. If you go look at the classified information, there is more there. I guess what we're saying is that you accept, without any doubt, that the FBI should have looked at all things Trump based on [George] Papadopoulos, that it would have been a dereliction of duty not to do so."

Graham's "facts" are not only inaccurate; they've been proven baseless. Every intelligence organization in the United States determined that Russia meddled in the 2016 election. It wasn't a plot created by Hillary Clinton.

"Mr. Chairman, what you just said is so alarming that we should have had, somewhere along the way, a thorough nonpartisan investigation of this whole Crossfire Hurricane," Durbin cut in. "It turns out we did. Inspector General Michael Horowitz in December of 2019, found that FBI's Crossfire Hurricane investigation was 'opened for an authorized purpose, had adequate factual predication and was not influenced by bias.' FBI Director Christopher Wray agreed. That isn't what President Trump or Attorney General [Bill] Barr, perhaps members of this committee, wanted to hear, so they've tried to reopen that independent IG investigation in every partisan way imaginable, and this is the fourth try in this committee. Enough!"

See the videos of the exchange below: