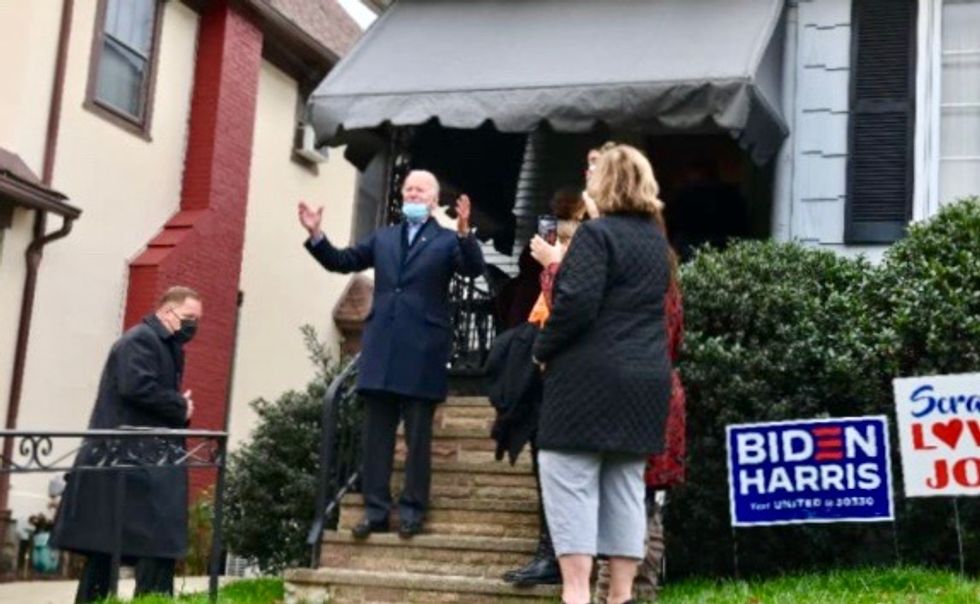 Democratic presidential candidate Joe Biden has repeatedly returned to his roots, literally and figuratively, during an 18-month campaign, including this visit to his childhood home in Scranton, Pennsylvania on Election Day, November 3, 2020 (AFP)

oe Biden likes to talk about growing up in the industrial town of Scranton, and as Americans voted Tuesday the Democratic presidential nominee returned to his childhood home, signing his name on the wall for good luck.

"From this House to the White House with the Grace of God," Biden wrote in black pen on a wall of the living room behind a picture, signing his name and adding the date, "11-3-2020."

"His pen to God's ears," wrote one Twitter user under a photograph of the signed wall snapped by a reporter traveling with Biden as he courts votes in Pennsylvania on Election Day.

The intimate moment in the house was actually a repeat of a time on the campaign trail in 2008 when he signed a bedroom wall here during his second presidential bid, one that ended early but led to Barack Obama choosing him as a vice presidential running mate.

It has become a tradition of sorts for the 77-year-old, who served for more than three decades as a US senator from neighboring Delaware where the family moved when Biden was 10, to return to his roots.

"We're going home," Biden, accompanied by two of his granddaughters, told reporters as he landed in Scranton for one of his final gestures of an 18-month presidential campaign odyssey.

"I watch you all the time," she told Biden during a brief exchange before welcoming him into the house. "I'm so proud of you."

Even as the coronavirus forced an end to campaigning as Americans had come to know it -- face-to-face encounters, relentless hand-shaking and selfies on rope lines -- Biden got a whiff of that excitement on the street.

More than 100 neighbors, supporters and onlookers, nearly all of them masked, had gathered near the home with a gray awning and black shutters.

Biden huddled with some old neighbors, and made a few other stops in town, including at the home of US Senator Bob Casey's mother and at a union local office, before heading to Philadelphia for one final get-out-the-vote effort.

The Democrat and President Donald Trump are bitterly contesting swing state Pennsylvania, which has emerged as perhaps the pivotal battleground of the entire election.