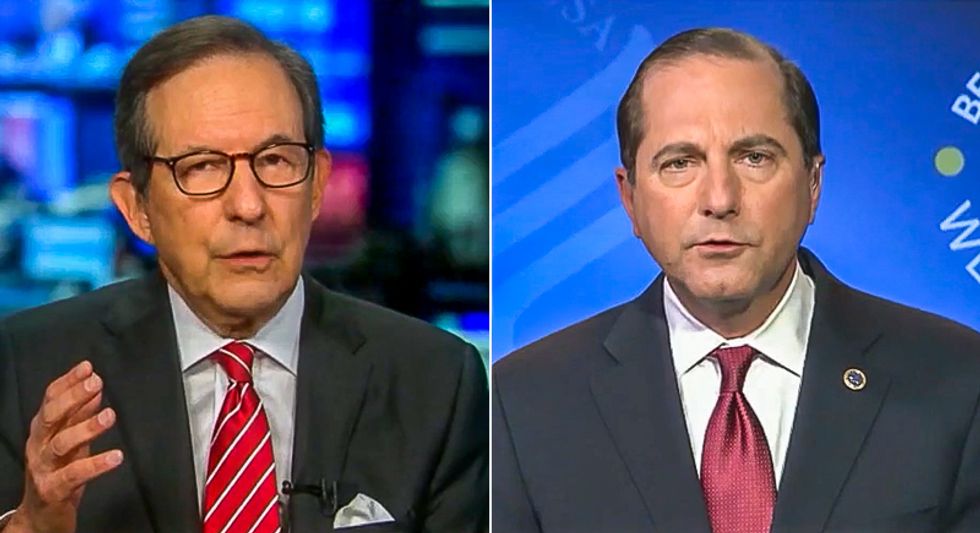 Fox News host Chris Wallace on Sunday grilled Health and Human Services (HHS) Secretary Alex Azar after polls show that Americans do not trust a COVID-19 vaccine that has been rushed through the approval process by the Trump administration.

During an interview with Azar on Fox News Sunday, Wallace noted that 40% of Americans have told pollsters that they are reluctant to get the vaccine.

"One of the reasons is because concern about politics," Wallace explained. "Why not stop the politics and let the scientists do their jobs?"

For his part, Azar insisted that he had not prevented scientists from making sure the vaccine is safe.

Wallace interrupted: "But you've got the president tweeting that somehow the decision on when to release the vaccine was an effort to defeat him in the election. You've got the White House chief of staff calling in the FDA commissioner and say let's get going faster."

"You may be letting the scientists do their job but people in the White House don't appear to be," the Fox News host noted.

Azar vowed that people would have "positive experiences" with the vaccine, which he said would drive public acceptance.

Wallace went on to point out that the U.S. is now seeing record hospitalizations and deaths from COVID-19.

"Secretary Azar, isn't this the result of a massive failure by President Trump and his administration?" Wallace asked.

Azar responded by blaming the crisis on "behavior and cold weather."

Wallace shot back with a reminder that Trump had undermined his own officials when they tried to promote the use of face masks.

"If President Trump had worn a mask then and urged everyone to wear a mask then -- back in April -- the way Joe Biden is right now, wouldn't we be in much better shape?" the Fox News host pressed.

"I welcome Vice President Biden to the club," Azar said.