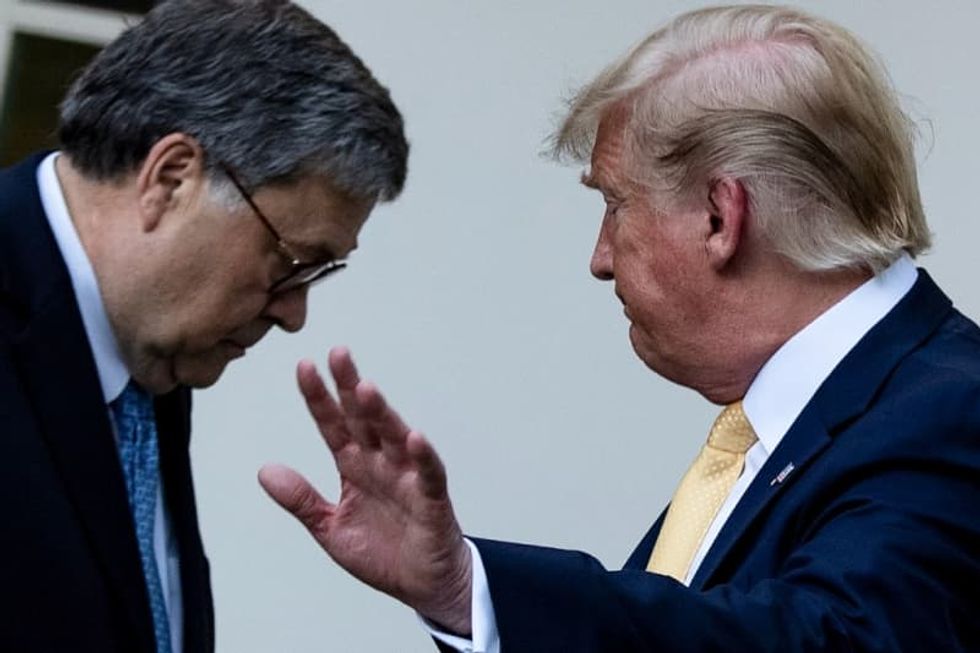 As a businessman, Donald Trump always had a fixer -- part-lawyer, part-law bender, someone to make bad things go away. And as president, he thought he'd gone one better: his very own Attorney General Bill Barr.

Barr, 70, resigned Monday after falling out publicly with Trump, ending one of the most scrutinized and high-stakes relationships in Washington just weeks before the Republican president makes way for Democratic President-elect Joe Biden.

A veteran Washington insider who had already served as the top US law enforcement official under Republican president George H.W. Bush, Barr took office in February 2019.

In an already volatile Trump presidency, this was an especially combustible moment.

And special counsel Robert Mueller was winding up a huge probe into Russian attempts to interfere with the 2016 presidential election and assist Trump's surprise victory over Hillary Clinton.

Trump had fired Sessions precisely because he refused to be the president's pointman on the issue, recusing himself -- and triggering the appointment of the dogged outside investigator.

Barr came under almost immediate criticism that he sought to dismantle the customary firewall between the White House and the Justice Department.

Although he left Mueller to finish his probe, Barr performed a deft piece of political maneuvering by getting out in front of the dense official Russia report with a short summary of his own.

The four-page statement highlighted that Mueller had not found direct, provable links of conspiracy between Trump and the Russians. This dominated subsequent coverage, even if the actual report, released only shortly after, raised many troubling questions about the election and Trump's behavior.

In unusually open criticism, one federal judge accused Barr of "misleading" the public.

For some, Barr was a bigger version of the private attorneys guarding Trump during his tumultuous business career against lawsuits and criminal allegations related to everything from bankruptcy to divorce, fraud and sexual assault.

Barr "is turning the Justice Department into a shield to protect the president and his henchmen," Seattle prosecutor Michael Dion wrote.

Senator Elizabeth Warren tweeted after the announcement of Barr's departure that he "made our criminal justice system less just and @TheJusticeDept more corrupt. Good riddance."

But Republicans saw Barr as a straight-shooter bringing stability during extraordinary Washington turmoil.

Senator Lindsey Graham said Barr "was the right man at the right time in overseeing highly political investigations and stood in the breach at times against both the left and the right."

Early on, much of what Barr did clearly served Trump's agenda, including backing up his claims that the FBI abused its powers by delving into the Trump-Russia connections.

Earlier this year, prosecutors asked a federal court for a sentence of up to nine years in prison for Trump adviser Roger Stone, who was convicted of lying to Congress and obstructing a congressional probe into the role of Russia in the 2016 election.

In the ensuing political row, featuring Trump lashing out continuously on Twitter, Barr appeared to have finally had enough, declaring that Trump was making his job "impossible."

"I'm not going to be bullied or influenced," he told ABC.

However, after the Stone fiasco, things had only gotten more tense between the two men.

Trump hoped a Justice Department investigation into the allegedly political roots of the Russia probe would produce a bombshell report before Election Day, giving him a much needed boost against Biden. The report didn't materialize.

Trump had also hoped prosecutors would go after Biden's son Hunter and his business dealings in Ukraine and elsewhere -- again, producing a bombshell report that could change the election.

Moreover, The Wall Street Journal later reported that the Justice Department is indeed investigating Hunter Biden but deliberately chose not to make anything public ahead of Election Day.

In the wake of his defeat to Biden, Trump has been loudly and falsely claiming that he was the victim of voter fraud. And once more, despite enormous political pressure, Barr has refused to play along.

"We have not seen fraud on a scale that could have effected a different outcome in the election," Barr told The Associated Press.

Hearing about Barr's reported decision to bury the Hunter Biden probe, Trump issued an angry three-word tweet that could summarize everything he feels about the Justice Department these days, as he tries to cling to the White House: