Colbert hilariously mocks Republicans for being 'forced to face their greatest fear: reality' 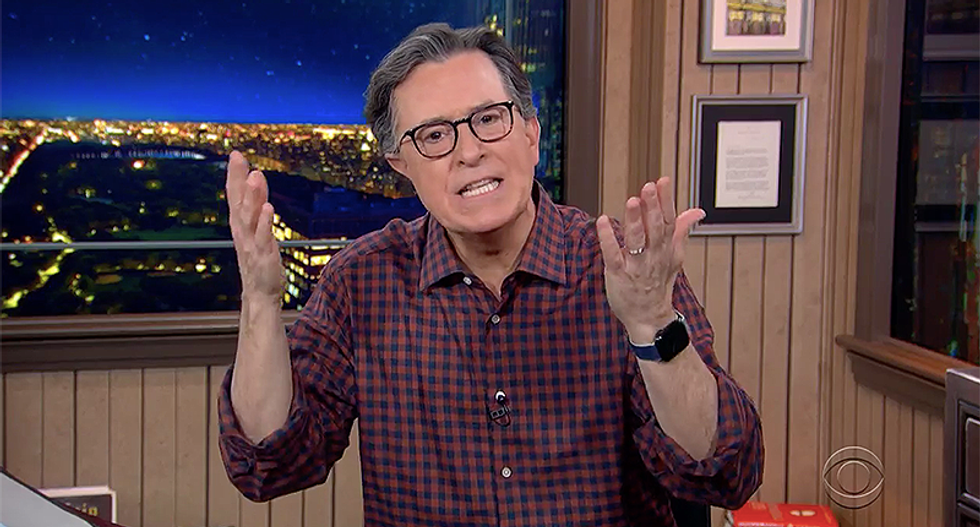 A few Republicans finally admitted today that President Donald Trump lost the 2020 election to President-elect Joe Biden. It took them a month to fully work through the five stages of grief, finally reaching acceptance this Tuesday.

"Yeah, it was an extreme position, but the GOP is trying all kinds of freaky, new anti-democratic positions lately," Colbert said. "They're all detailed in The McConnell-sutra. Fully illustrated. Speaking of which, with yesterday's electoral college result, some Republicans have been forced to face their biggest fear: reality. Like Senate Majority Leader and Palpatine-American, Mitch McConnell.Today, McConnell took to the Senate floor and bravely faced a fact."

"It's not just McConnell," Colbert continued. "Other Republicans are coming around, including Texas senator and man who wants you to ask your doctor about Xeljanz, John Cornyn. Cornyn says Republicans need to recognize that Biden won, arguing, 'There comes a time when you have to realize that despite your best efforts, you've been unsuccessful.' Yes, it's like we tell kids when they play sports. It is important to realize when you've lost, and then six weeks later, drive back to the field so you can shake the other team's hands and say, 'Good game. You cheater.'"

Senate Majority Whip John Thune was another Republican who finally faced the fact that the GOP is going down in flames.

"Thune said that while the GOP may be disappointed with the result, 'At some point, you have to face the music,'" Colbert quoted. "Yes, that music is a little ditty called 'Hail to the Chief,' and for the next four years, you're going to hear it every time you stand up when Joe Biden walks into the room. But some in the GOP are still struggling to mince words in a way that will appease 'he who shall not be named.' Just ask Wyoming senator and man interrupting a woman to say the same thing she's saying, John Barrasso. When asked whether Biden is president-elect, Barrasso said that was a 'Gotcha Question.'" The term was coined by former Gov. Sarah Palin (R-AK), who attacked questions she couldn't answer because she didn't have the facts, and it would make her look like an idiot.

"Yeah, classic gotcha question," Colbert mocked. "Like 'Who's the president?' and 'What's your name?' and 'What year is it?' and if you don't give the answers they like, all of a sudden, they gotcha in five-point restraints for your own safety."

"Well, it seems to me that being elected by the Electoral College is a threshold where a title like that is probably most appropriate, and it's, I suppose you can say 'official,' if there is such a thing as official president-elect, or anything-else-elect," Cramer said. "There's an inauguration that will swear somebody in, and that person will be the president of the United States, but whether you call it that or not, you know, there are legal challenges that are ongoing — not very many — probably not a remedy that would change the outcome."

It was a level of annoying stupidity that Colbert said would have been obvious whether Cramer was denying Biden won or denying if he ate someone else's yogurt in the fridge.

"Well it seems to me that writing your name on a snack is a threshold where it might be appropriate to say it was yours given that you-- I suppose you cold say labeled-- if there is such a thing as officially claiming yogurt or any dairy product that, of course, the original cow has some interest in," Colbert rattled off. "And perhaps there is a communal cooling box, which we refer to as the 'fridge'-- whether you call it a fridge or not-- the cooling agent itself is freon. Although, there are others that can be used-- not very many-- probably none that would bring the yogurt back after it's been consumed. So, I don't-- again, I don't know how a man acknowledges another man's Chobani."