'Duped' Trump supporters will realize they got suckered by ‘mountains of misinformation’: Georgia official 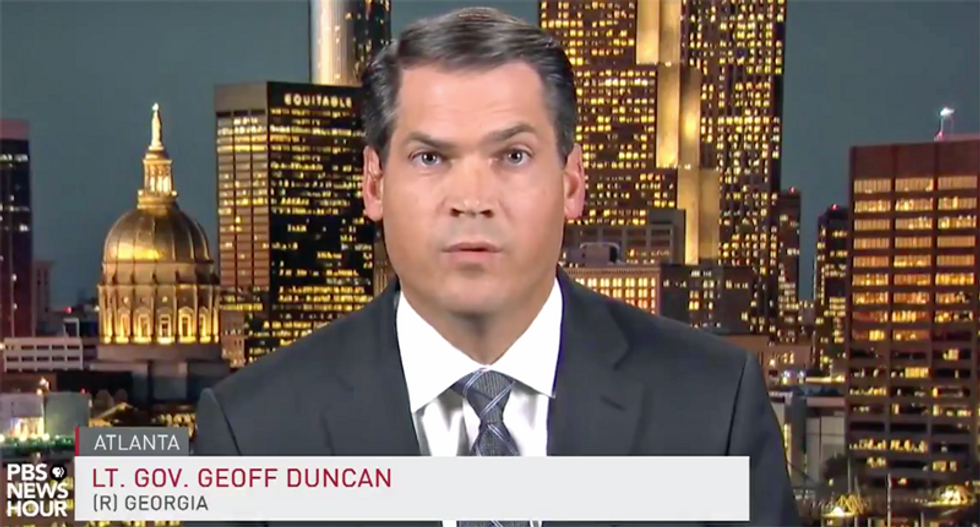 Supporters of Donald Trump will soon realize that they were mislead about the 2020 presidential campaign, which was won by President-elect Joe Biden.

Republican Lt. Gov. of Georgia Geoff Duncan made the prediction while being interviewed by Judy Woodruff on the PBS NewsHour on Thursday.

Woodruff noted that 106 Republican members of Congress are calling upon the Supreme Court to overturn the election results in four states.

"That's a pretty powerful group of people who are saying that what you did in Georgia doesn't hold up under the law," Woodruff noted.

"You know, I think there's going to be hundreds of thousands if not millions of people that wake up in the coming days and weeks that realize they've been duped," he predicted. "They've been duped by mountains of misinformation."

"Judy, to be honest with you, it's not America, it's not democracy," Duncan said.

"I was proud of his four years of conservative leadership," @GeoffDuncanGA says of President Trump. "But it's time… https://t.co/pVa1n4Heyw
— PBS NewsHour (@PBS NewsHour)1607644729.0

A former Fox News editor is sharing his reaction to the outcome of the Arizona audit after being fired from the network for calling the state for President Joe Biden during the 2020 election.

Speaking to CNN's Jim Acosta, Chris Stirewalt, a former digital politics editor for FOX News, was asked whether or not he felt vindicated after hearing the outcome of the audit. The Republican-led audit determined that former President Donald Trump actually lost by a larger margin than initially thought as 231 votes were subtracted from his number of votes. President Joe Biden, on the other hand, received an additional 99 votes.