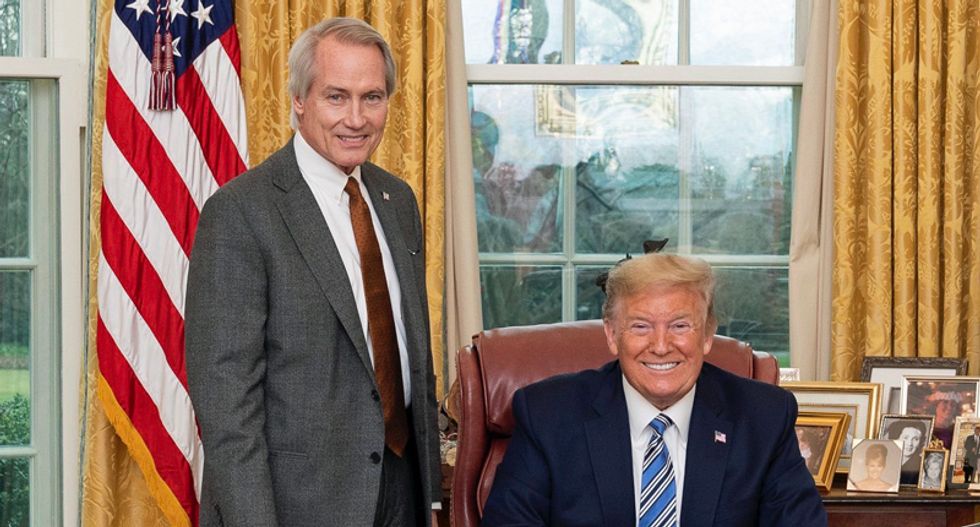 Lin Wood is in his glory right now. The colorful attorney finds himself right where he wants to be -- in the eye of a Twitter storm -- as he wars with the very Republican Party that thought he was going to be their secret, killer-bot legal weapon.

Wood’s original mission for the Red Team was to expose 80 million-plus Americans for the massive fraud they perpetrated in voting for Joe Biden and Kamala Harris. That hasn’t worked out so well. In fact, it has gone so poorly that

Most recently, the 11th Circuit Court of Appeals today handed Wood a 3-0 defeat over his legal frivolity in Georgia, ruling, “because Georgia has already certified its results, Wood’s requests to delay certification and commence a new recount are moot.” And oh, by the way, it found Wood lacked standing in the case. Other than that it went great.

Woods remains unbowed. At roughly the time it was announced today that Team Trump’s won-loss record now stands at 1-46 in post-election litigation, he was still very much not backing down from his attacks on Republican leaders in Georgia, including the state’s two abominable U.S. senators, who hold the nation’s future in their unclean hands, Kelly Loeffler and David Perdue.

Wood’s case against the two is essentially that they haven’t gotten crazy enough on behalf of his irrational case that Donald Trump won in a landslide. Since Wood and the rest of Trump’s legal clown car cannot win in court, they are indignant that allies won’t do the patriotic thing and simply go around the courts and invalidate the results as wrong by using legislators to game the system.

Here’s what happens when you’re a Republican and your killer bot goes off programming and start raining not-so-friendly fire upon you. You get these:

Under his declared state of emergency in GA. @BrianKempGA has power to demand impoundment of all voting machines fo… https://t.co/Ujxe5nXwma
— Lin Wood (@Lin Wood) 1607205361.0

Sometimes, Wood doesn’t bother with mortals, but goes right to the top:

One can only imagine what God thinks about getting dragged into this. Especially when one considers how low Wood is willing to stoop on social media. Judge for yourself what Wood posted today about the traffic accident that took the life of one of Loeffler’s young staffers Friday:

Wood’s next post also spoke to his state of mind, such that it is:

It has to be especially worrisome to Republicans that Wood isn’t likely to go peacefully into the darkness even when the last Kraken has been returned to fellow legal genius Sidney Powell’s chicken coop. The two are scheduled to lose the big Kraken case Monday.

Win lose or draw, there’s no reason to believe Wood is leaving the stage in the next month. The man is literally a celebrity storm hunter. He thrives on the spotlight.

Wood’s eclectic client list began with the late Richard Jewell, his first major public client, who he represented in defamation suits over having been falsely accused of the 1996 Centennial Olympic Park bombing in Atlanta. After apparently winning a sizeable settlement for Jewell, Wood has sought out one high-profile case after another, often with a salacious twist of some kind.

Wood reportedly has obtained large defamation settlements for former Rep. Gary Condit (related to the highly publicized disappearance and death of intern Chandra Levy), and for the parents of the late JonBenet Ramsey. He has represented the 20-year-old woman who accused the late basketball star Kobe Bryant in 2004 and he represented the late Herman Cain when he was pushing back against sex-related accusations by multiple women. He lost a defamation case on behalf of a client suing Elon Musk.

Last week, Woods was briefly profiled in a story at Thomson Reuters: Westlaw Today about the election-conspiracy lawsuits. It provided some new perspective:

“Wood, a prominent conservative lawyer based in Atlanta, raised his national profile this year defending Kyle Rittenhouse, the 17-year-old charged with killing two protesters and wounding another during demonstrations in August on the streets of Kenosha, Wisconsin. Wood's Twitter profile features a QAnon slogan, #WWG1WGA, for "where we go one, we go all." Wood said he is not a member of QAnon and said associating him with it was a "smear." He said he adopted the conspiracy movement's slogan because he believes "it stands for unity."

“In August three former attorney colleagues sued Wood in state court in Fulton County, Georgia, alleging they were never paid as part a settlement agreement they reached when they left Wood's firm. The case remains pending, according to court records. Wood has called the fraud lawsuit a "shakedown effort." In an interview Friday, he called it "frivolous."

Here’s what not frivolous: Lin Wood apparently likes the spotlight a whole lot more than he likes the Georgia Republican Party. And he doesn’t scare easy. With enemies like Wood, Rev. Raphael Warnock and Jon Ossoff may not need friends.

At issue in the case—Federal Election Commission (FEC) v. Ted Cruz for Senate—is the Bipartisan Campaign Reform Act of 2002, also known as the McCain-Feingold Act, and a $260,000 loan Cruz made to his Senate reelection campaign just ahead of the 2018 election.

Beaming and waving her arms in the air, teenage pilot Zara Rutherford was euphoric Thursday after completing a solo, round-the-world flying odyssey with the dream of getting into the record books.

"It was very difficult but very rewarding," confessed the 19-year-old Belgian-British sensation who can claim to being the youngest woman to have circumnavigated the globe alone in a cockpit.