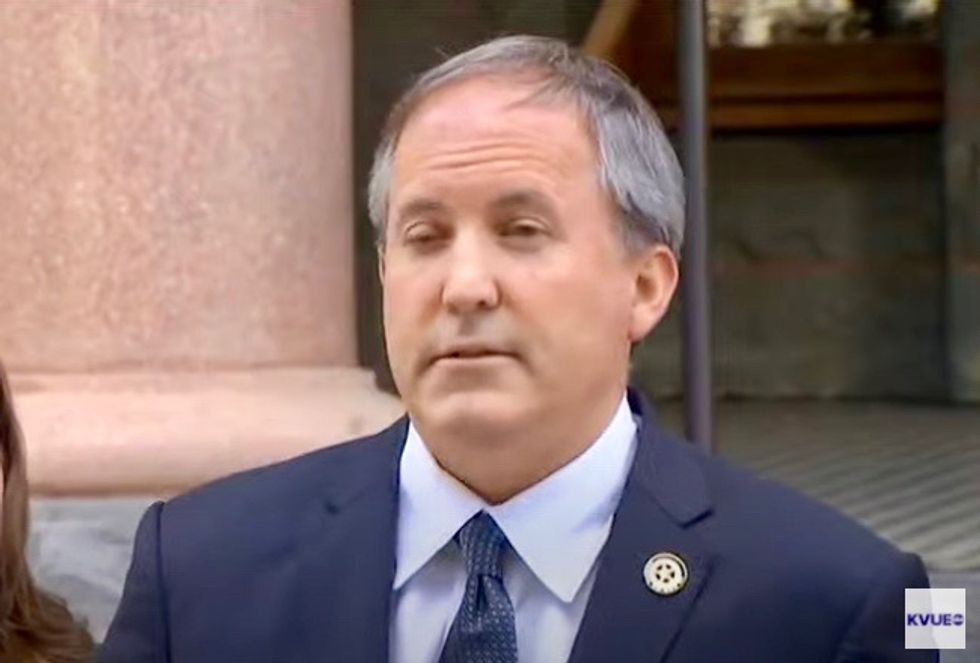 Although legal experts have declared that Texas Attorney General Ken Paxton's lawsuit attempting to overturn President-elect Joe Biden's decisive victory in the 2020 election has "zero" chance of succeeding and is a self-serving "publicity stunt" by an official who hopes to retain the favor of President Donald Trump, political observers warned Friday that the support by more than 100 Republican lawmakers for the legal challenge represents a clear sign that the very idea of democracy is under significant attack in the United States.

Anthony Michael Kreis, a law professor at Georgia State University, tweeted this week about the "dissonance between the equally true assessments that the Texas lawsuit is dead on arrival" and that it is a "serious attack...worthy of our strongest condemnation."

"Let us be clear. Texas invites this court to overthrow the votes of the American people and choose the next president of the United States. That Faustian invitation must be firmly rejected."

Despite numerous vote recounts confirming over and over again that Biden won the election, and state and federal courts' rejections of dozens attempts by Trump and the Republican Party to have the results declared illegitimate, Paxton this week called on the U.S. Supreme Court to delay the Electoral College's certification of the election, which is scheduled for next week. The results in Georgia, Pennsylvania, Wisconsin, and Michigan, Paxton argued, were plagued by "significant and unconstitutional irregularities."

The attorneys general of the four states in question—three Democrats and one Republican—warned that the mere filing of the case represents a "seditious abuse of the judicial system" and called on the Supreme Court to "send a clear and unmistakable signal that such abuse must never be replicated."

"Let us be clear," a brief filed by Pennsylvania Attorney General Josh Shapiro read. "Texas invites this court to overthrow the votes of the American people and choose the next president of the United States. That Faustian invitation must be firmly rejected."

Paxton's lawsuit follows the failures of numerous legal challenges filed by the Trump campaign, in both state and federal courts. In Georgia, Trump's legal team alleges in one case that the voting machines in the state were rigged to switch votes for Trump to ones supporting Biden, despite offering no material evidence of this. Officials in Georgia completed a hand-count audit of all five million of the state's paper votes, as well as a machine recount, both of which confirmed Biden's victory, and the case was dismissed earlier this week.

In Pennsylvania, nine state Republican lawmakers filed a lawsuit in state courts Monday, claiming "irregularities" and unfair mail-in voting procedures. Trump's campaign on Tuesday appealed a case it had lost to the Supreme Court, that sought to contest a mere 2,000 votes outside Philadelphia.

"Disenfranchising millions of voters after Pennsylvania has already certified its election results would grievously undermine the public's trust in the electoral system, contravene democratic principle and reward Texas for its inexcusable delay and procedural gamesmanship," Pennsylvania's brief said.

The high court could announce as early as Friday whether it will hear Paxton's case. A brief filed in Wisconsin by Attorney General Josh Kaul warned that even a decision by the Supreme Court to take up the challenge would "undermine faith in democracy."

"Merely hearing this case—regardless of the outcome—would generate confusion, lend legitimacy to claims judges across the country have found meritless, and amplify the uncertainty and distrust these false claims have generated," the brief from Wisconsin read.

At Slate, Mark David Stern noted that Paxton's case—which he posits was likely filed as an attempt to secure a preemptive pardon from the president, as Paxton is reportedly being investigated by the FBI for corruption—has a roughly "zero" chance of succeeding. However, he noted, the dozens of Republican leaders who have publicly signed onto the case will remain in power long after Trump leaves the White House next month.

"We should not take the radicalization of conservative lawyers lightly," Stern wrote. "The attorneys general backing Trump will not disappear from the political scene alongside Trump. Nor will their aides, many of whom are fellow Federalist Society members with aspirations for higher office...These lawyers represent the next generation of the Republican Party, and they have no qualms about disenfranchising 80 million Americans to seize the presidency. Trump will leave office in January. But the attorneys general who are aiding his failed coup are just getting started."

At the New York Times, columnist Jamelle Bouie added that as "sloppy" and "harebrained" Paxton's arguments are, "the 'Trump Won' farce"—which has left 72% of Republican voters refusing to accept the election results, according to a recent poll—"isn't funny anymore."

Although the Texas lawsuit "has no serious chance of success," Bouie wrote, the decision of more than 100 Republican officials to go along with it has been instructive regarding the state of one of the country's two major political parties.

"We have learned that the Republican Party, or much of it, has abandoned whatever commitment to electoral democracy it had to begin with," Bouie wrote. "That it views defeat on its face as illegitimate, a product of fraud concocted by opponents who don't deserve to hold power. That it is fully the party of minority rule, committed to the idea that a vote doesn't count if it isn't for its candidates, and that if democracy won't serve its partisan and ideological interests, then so much for democracy."

"While the future is unwritten, the events of the past month make me worry that we’re following a script the climax of which requires a disaster," he added.