Here's how Bill Barr’s departure could pave the way for 'Trump cases' to move forward: report 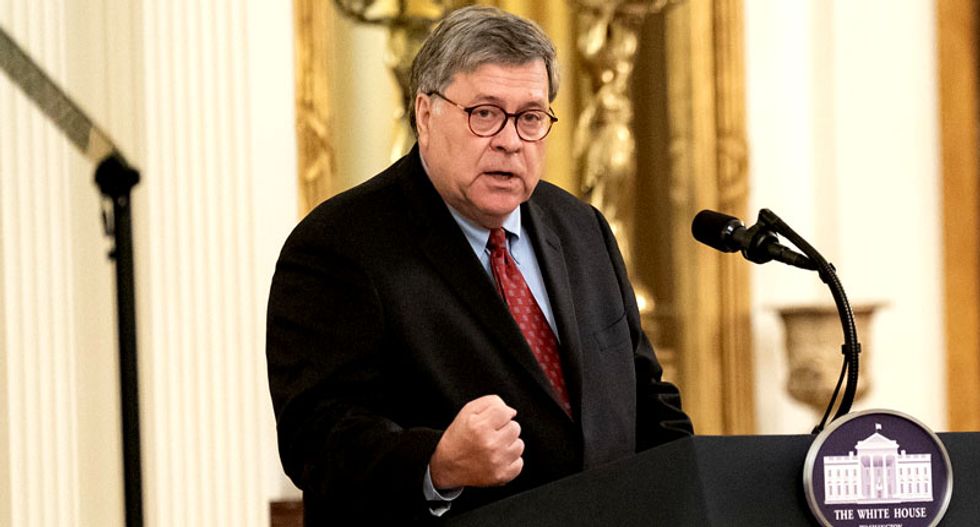 Attorney General William Barr has been one of President Donald Trump's most aggressive defenders, from the Mueller Report to the Ukraine scandal and the president's impeachment trial. But when the 70-year-old Barr acknowledged Joe Biden as president-elect during a recent interview with the Associated Press and said that there was no evidence that widespread voter fraud occurred in the 2020 presidential election, many diehard Trumpistas felt betrayed — and Barr has resigned, effective December 23. Journalist Chris Smith discusses the possible ramifications of Barr's departure in an article published by Vanity Fair on December 16, wondering if federal prosecutors will feel empowered to go after Trump and his associates more aggressively.

Smith is referring specifically to the federal prosecutors for the Southern District of New York. Although Trump lives in the White House — which he will be have to depart on January 20, 2021 — and lists Florida as his official state of residence, it was in his home town, New York City, that Trump led his company, the Trump Organization.

An anonymously quoted source, described by Smith as a "former senior SDNY official," told Vanity Fair, "Everything depends on the facts and witnesses in those (Trump-related) cases. But certainly, they are more likely to proceed without Barr in there, who was just a disgrace in every way."

Smith points out that Barr, as attorney general under the Trump Administration, "politicized nearly every corner of the Justice Department."

"Bill Barr will not be missed by most of the hundreds of nonpartisan career prosecutors inside the Department of Justice," Smith explains. "Least of all, though, by the lawyers working for the Southern District of New York, whose jurisdiction covers most of Donald Trump's hometown — and whose continuing probes of the president's associates, including an investigation of Rudy Giuliani, are far less likely to be squashed."

Just had a very nice meeting with Attorney General Bill Barr at the White House. Our relationship has been a very g… https://t.co/SDE0UDK6IX
— Donald J. Trump (@Donald J. Trump) 1607985541.0

One former Southern District prosecutor who has been vehemently critical of Trump and Barr is Mimi Rocah, who was often featured as a legal analyst at MSNBC during the Russia investigation and is now district attorney-elect for Westchester County, New York.

Rocah told Vanity Fair, "For four years, we've had an administration where politics was so injected into DOJ. The only way out of that is to stop making decisions with political concerns in mind."

It remains to be seen who Biden will choose as his attorney general. But whoever it is, an anonymous interviewee described by Smith as a "former top New York federal prosecutor," told Vanity Fair, "Look, whoever comes in as AG, things are gonna change pretty damn quickly. A new leader will be half the battle in restoring the integrity of the department."

Glen Kopp, a former assistant U.S. attorney for the Southern District, also predicts changes at DOJ following Barr's departure. Kopp told Vanity Fair, "I have no doubt that facts have driven the office's investigations and its decisions the past four years. But if there are Trump cases, is it more likely they go forward? Yeah. And I think SDNY's confidence in leadership at the top levels of Main Justice backing up whatever they do will change."