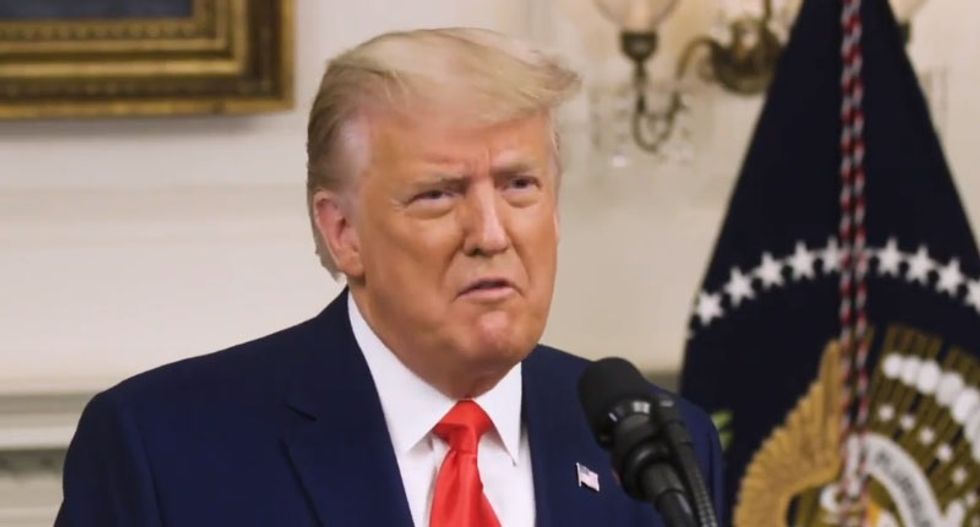 Just days after a top Georgia official warned that President Donald Trump's lies about the November election results are putting lives at risk, the outgoing incumbent late Wednesday released a 46-minute speech jam-packed with blatant falsehoods and fabrications about mass voter fraud that even his handpicked attorney general has rejected.

Characterizing his remarks from the White House as perhaps "the most important speech I've ever made," the outgoing president posted the extended rant on Facebook amid news that the United States reported its worst 24-hour coronavirus death toll—at least 2,760 people—since the pandemic began. Covid-19 hospitalizations, according to the latest figures, are also reaching record highs in the U.S.

But Trump did not mention the catastrophic public health crisis during his speech, opting instead to ramble on about "shocking irregularities, abuses, and fraud" that he and his self-described "elite strike force" of attorneys have repeatedly failed to substantiate in court.

As his lawyers continue to rack up losses, Trump used his speech to openly plead with the Supreme Court—to which he has appointed three right-wing justices—to intervene on his behalf, an unlikely scenario given the often comical weakness of his legal team's performances in lower court fights.

"Maybe you'll have a re-vote, but I don't think that's appropriate. When those votes are corrupt, when they're irregular, when they get caught, they're terminated, and I very easily win," Trump said, falsely. "In all states, I very easily win, the swing states."

Reportedly filmed last week, Trump's remarks were posted online days after a pair of key battleground states, Wisconsin and Arizona, certified President-elect Joe Biden's victories, further solidifying his decisive win in the November contest. In a viral clip, Arizona's Republican Gov. Doug Ducey is seen ignoring what appears to be a phone call from Trump as he certifies the state's results.

Gabriel Sterling, a Georgia voting systems manager and a Republican, said Tuesday that Trump's constant lies about the results are directly responsible for recent intimidation and death threats against election workers in the state, which has been certified for Biden.

Refusing once again to concede defeat even with the transition to the Biden administration officially in motion, Trump evinced no concern that his remarks could lead to violence against election workers, who he baselessly accused of being complicit in a vast conspiracy to steal the election.

As Abigail Weinberg of Mother Jones noted, "Because the speech was prerecorded and posted to Facebook, news networks didn't have an opportunity to cut him off once he began spewing falsehoods. From now on, social media may be this one-term president's only outlet."