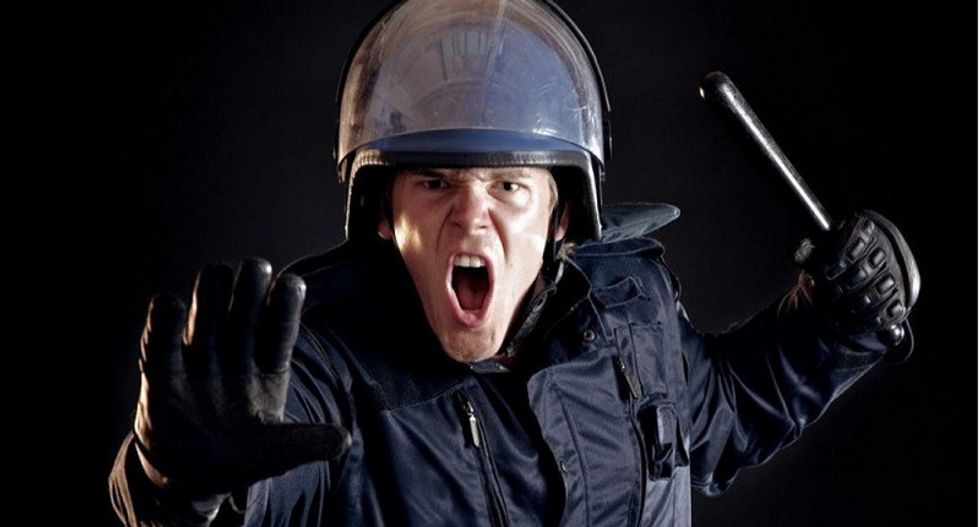 The consequences of conspiracy theories are out in full force in Houston, Texas, Tuesday, where a police officer held a man at gunpoint because he believed an outrageous internet lie.

According to an ABC13 report, the officer was a Police Captain who has now been arrested after running a man off the road and pointing a gun at his head.

A release from the District Attorney's office revealed 63-year-old Mark Anthony Aguirre was taken into custody Tuesday and charged with "aggravated assault with a deadly weapon, a second-degree felony punishable by up to 20 years in prison."

"He crossed the line from dirty politics to commission of a violent crime, and we are lucky no one was killed," Harris County DA Kim Ogg explained. "His alleged investigation was backward from the start - first alleging a crime had occurred and then trying to prove it happened."

Court documents show that he told police that he was part of a group called "The Liberty Center," which is doing investigations into election ballot schemes.

A Facebook group called The Liberty Center for God and Country, funded by right-wing groups, is pushing such voter fraud claims. He said that the Houston-based group was paying him $266,400 to carry out the mission against the air conditioner repairman. A whopping $211,400 of that amount was to be deposited into his account after the incident. It was confirmed in the court documents that he was paid.

The group was funded by Dr. Steven Hotze who is one of the major donors to Texas Gov. Greg Abbott (R). He once demanded that Abbott "shoot to kill" Black Lives Matter protesters.

"A conservative power broker, Hotze unsuccessfully sued to stop the extension of early voting in Texas for this year's election," the Star Tribune reported. "He also sued officials in Harris County, where Houston is located, to limit in-person and absentee voting, making allegations without evidence that Democrats were engaged in "ballot harvesting" by gathering votes from individuals who are homeless or elderly."

A lawyer for Hotze said that he hired Aguirre's company along with 20 investigators.

The captain had been surveilling the man for four days, he said, because he is the one behind a giant voter fraud scheme, holding 750,000 ballots in his truck.

The man was actually an air conditioner repairman and had no ballots in his truck.

Aguirre then took police to a parking lot where he said another suspect took the "truck" filled with the "ballots."

When right-wing message boards started a conspiracy about a pedophile ring in the basement of a Washington, D.C. pizza parlor, a man rushed to the aid of the children heavily armed. The family-friendly, neighborhood pizza parlor could have been the site of a mass shooting, but managers talked the man down and brought him inside to look for the so-called "captured children." The man ultimately told the conspiracy theorists that it was all a lie, and he's now behind bars for four years.

Texas-based right-wing activist Alex Jones led a conspiracy that the Sandy Hook Elementary School shooting wasn't real, which ultimately led to many of the families of victims being targeted by his online viewers. One of the fathers had to go into hiding out of fear for his life.

See the full report at ABC13.