Kayleigh McEnany: ‘God had planned for me’ to be Trump’s White House press secretary 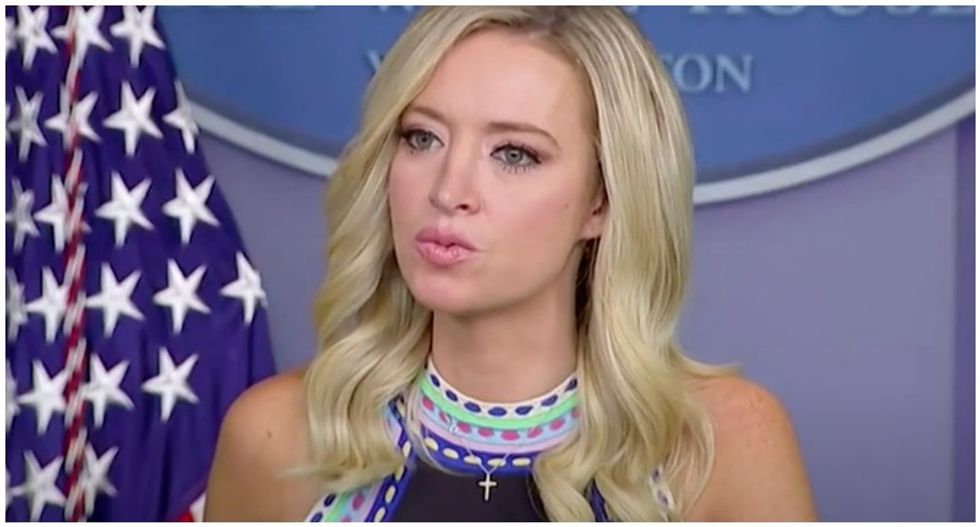 "God put me in this position, at this moment in time, for a reason."

In a glowing Fox News interview, McEnany uses the word "God" several times – including saying that God's plan was for her to be Trump's press secretary.

“God had a clear and definite plan for my life, and he put me on this journey in media and politics for a reason,” the 32-year old former Fox News employee told the conservative media outlet.

“I knew that God put me in this position, at this moment in time, for a reason,” McEnany added. “I recall both a former Democrat colleague at CNN as well as my Dad telling me you come into your position ‘for such a time as this’-- words from the book of Esther, a book that my hometown church ironically did a series on during my time here at the White House.”

“I tell you this to emphasize I approached this position with a sense of responsibility to live up to the task God had planned for me.”

“You will have struggles, hardship and seemingly insurmountable challenges," McEnany said, talking about balancing family and career, adding, "know you can overcome through faith and that God has a path for you if you trust Him and follow it.”

After the White House press pool tired of the lies they were fed by McEnany's predecessors in the Trump administration, on her first day at the podium they asked her if she would ever lie to them. She promised she would not. By the end of her first briefing she broke that promise.

Despite – or perhaps because of – her belief that being Trump's press secretary is God's plan, McEnany has continued to lie to the press and to the American people so frequently there are countless articles written about her falsehoods and half-truths.

She tells Fox News her briefing the press, which has all but disappeared now that she is also working for the Trump campaign, "always stands out to me as an example of the difference between the media’s sensationalism and the type of substance the American people deserve.”

And she continued to blast reporters, whom she attacks frequently in her press briefings.

“Some journalists, not all, are driven so much by scorn for the president, to the point of really interfering with, what I believe, their duties are, which is to convey information given to them by the administration to the American people.”

The "duties" of the press, contrary to McEnany's claim, are not to "convey information given to them by the administration to the American people.” The duties of the press are to report truth. Especially when an administration lies daily, the press has a responsibility to say what is a lie and what is the truth.