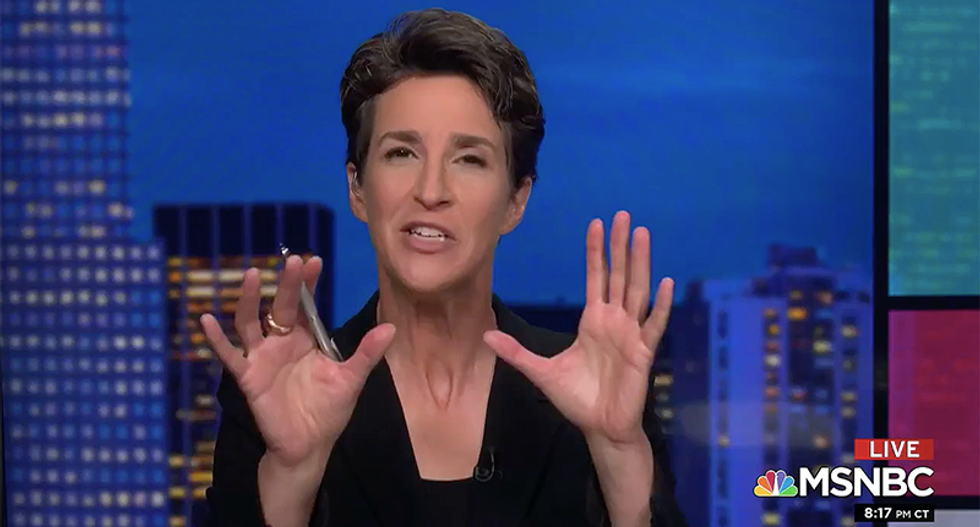 The man who is about to take over the Justice Department has a dark and disturbing past while serving under Attorney General Bill Barr, MSNBC's Rachel Maddow said on Tuesday.

Barr was either shoved out or legitimately resigned to spend more time with his family, and replacing him is Jeffrey Rosen, who has a slate of unethical behavior under his belt at the department.

The document revealed Tuesday is the criminal referral from the FBI and the Justice Department about President Donald Trump's behavior around his call with Ukraine's new president. It was a call that ultimately led to Trump being impeached and one that Republicans refused to investigate. After a working on a Freedom of Information Act (FOIA) request, BuzzFeed obtained and revealed the criminal referral for the prosecution of Donald Trump.

The document "is addressed on the counterintelligence version of the FBI," Maddow explained. "It's also copied to the head of the Criminal Justice Department."

On behalf of the office of the Inspector General of the intelligence community, the AIG is formally reviewing allegations, among other things, violations of law relating to a telephone call on July 25th between President Donald Trump and the President of Ukraine. According to the allegations, the president of the United States is using the power of his office to solicit interference from a foreign country in the 2020 U.S. election which includes, among other things, pressuring a foreign country to investigate one of the president's main political rivals. More specifically, the complaint alleges that President Trump, during a phone call with the Ukrainian president, sought to pressure the Ukrainian leader to help with Trump's 2020 election bid. If true, that might violate criminally enforceable laws."

The ISIG conducted a criminal review of the complainant's allegations. Based on the criminal review, I determine that there are reasonable grounds to believe that the allegations appear credible. If true, such allegations may violate laws which prohibit giving something of value in a federal, state or local election. Similarly, U.S. laws also prohibit a person from accepting or receiving a donation from a foreign national directly or indirectly. In addition, a conspiracy to engage in such conduct might also violate other criminally enforceable laws."

The Justice Department at the time said that the criminal complaint was under their purview and they'd handle it and that it shouldn't go to Congress. Barr and the DOJ then decided everything Trump did was fine, and they didn't even need to investigate it.

"That was the complaint escaping the garbage disposal that William Barr and the Justice Department tried to shove it into," said Maddow. That, she said, is how we got to the impeachment of the president.

The man in charge of keeping all of that under wraps was Jeffrey Rosen.

"Last week, the criminal division concluded that there were no legal grounds for a criminal investigation in to Mr. Trump's behavior," the New York Times reported Sept. 2019. In April 2020, after the impeachment was over, the inspector general who made the criminal referral was fired by Trump.

Rosen is now taking over the Justice Department in the final month of the Trump term, and Maddow said that she was surprised that there hadn't been much scrutiny of Rosen from anyone over the appointment.

"It's worth thinking about the things that Trump might want to do in that last month," Maddow said. "It's worth remembering the role that Rosen had in trying to make that alleged criminal behavior of President Trump's disappear, but not only disappear in a way that would submarine those allegations and prevent anybody else from looking at them. Look at what else has happened over Jeffrey Rosen's tenure since he and William Barr have been in office."

In a New York Times report Tuesday, reporter Charlie Savage wrote that Rosen has "kept a low profile, but with Attorney General William Barr's pending resignation, he is set to be the nation's top law enforcement official for the delicate final month of Mr. Trump's presidency. It will be an extraordinary responsibility for a man who has no prosecutorial experience and who has participated in several decisions in which the department took steps that favored the president's friends or punished his perceived enemies."

Maddow recalled that it was Rosen who tried to force an indictment of Andrew McCabe, the acting FBI director after Trump fired James Comey. She noted that when Trump tried to say that McCabe should be prosecuted and locked up, Rosen tried to make it happen.

Rosen was also the one put in charge of "reviewing the work of career prosecutors" who took on the case of Roger Stone. Rosen ultimately decided that all of those prosecutors should be overruled and Stone should get a much lighter sentence. Those prosecutors ultimately quit in protest after Rosen did to their case.

It was also Rosen who "quietly quarterbacked a government lawsuit that unsuccessfully asked a judge to order Mr. Trump's former national security adviser John R. Bolton to pull back his White house memoir, which presents a negative account of the president and had already been printed," the Times also reported.

Rosen was also the one who worked to make sure Secretary Ryan Zinke, shouldn't be prosecuted after being referred by inspectors for a number of scandals. Career prosecutors even convened a grand jury in that case, but Rosen put a stop to it.

Rosen was also the one who made sure that Paul Manafort didn't have to go to Rikers Island Prison.

Rosen was also the one behind a memo sent to federal prosecutors encouraging them to charge Black Lives Matter protesters with "sedition."

Those are just the things that the press knows about that Rosen has done. This man is now taking over the DOJ for the final month of Trump's term.