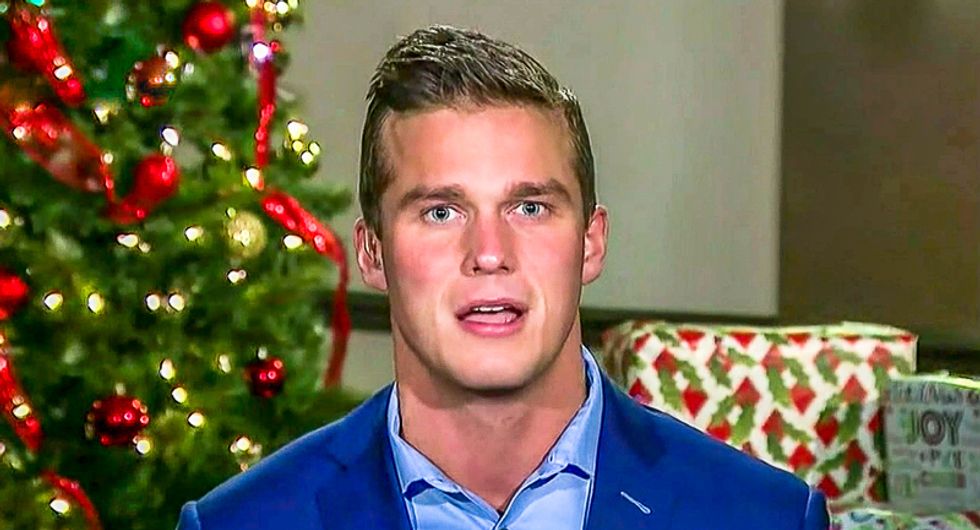 A North Carolina Republican who was elected to the U.S. House of Representatives in November insisted on Tuesday that Georgia Senate candidate Rev. Raphael Warnock (D) does not represent "real Americans."

Congressman-elect Madison Cawthorn (R) told Fox & Friends that he traveled from North Carolina to Georgia to fight for Republican control of the U.S. Senate.

"You see this Warnock fellow who's coming down here and disguising himself as some moderate pastor from the South who doesn't believe in these radical ideas," Cawthorn said. "But if you look at him really, what he actually believes, he is a radical's radical. He wants to defund our police, he says he's a pastor. Yet he's all about abortion."

"This is somebody who does not represent what real Americans believe," he insisted.

"I loved that he used the terms 'gangsters and thugs' because that's the people that he wants to really protect," Cawthorn opined. "He wants to take our police officers off the street, make our families here in Georgia and all across the country in more danger and protect and promote a society that benefits gangsters and thugs."

"He wants to make our country into a radical ash heap," he added.

Earlier this year, Cawthorn came under fire after he shared a social media post that sympathized with Adolf Hitler.

In an Instagram post, he could be seen visiting Hitler's "Eagle's Nest" vacation retreat and referring to the Nazi leader as "the Fuhrer."

"Strange to hear so many laughs and share such a good time with my brother where only 79 years ago a supreme evil shared laughs and good times with his compatriots," Cawthorn wrote at the time.

Cawthorn later said that he denounces white supremacy and Nazism.