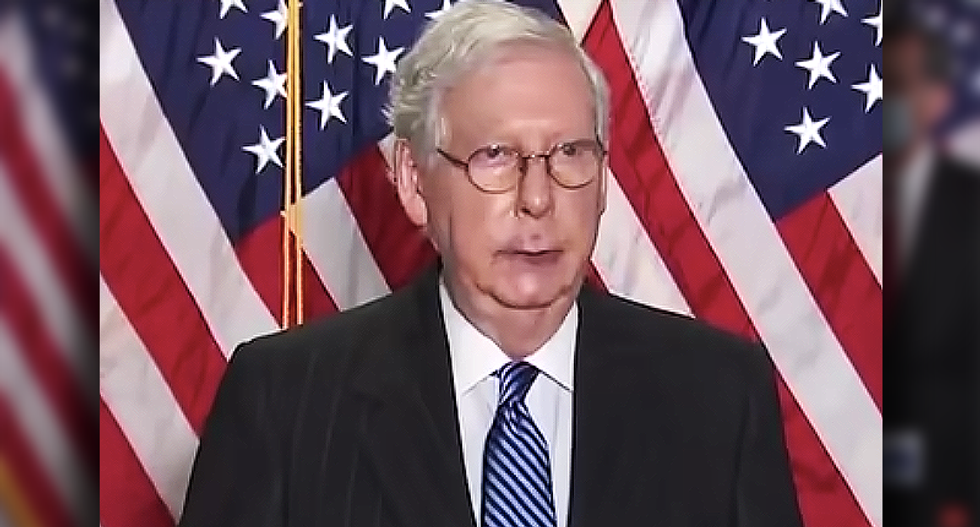 McConnell, who has held up COVID-19 stimulus funds for Americans for seven months now wants to slice further assistance ahead of the Christmas holiday. The angry and stingy miser depicted in Charles Dickens' holiday novella "A Christmas Carol," has been depicted over the years for

"While Congress debates whether to give Americans $600 or $700 each in a coronavirus aid package — approximately half the amount they received earlier this year — new unemployment numbers show that Americans are out of work far above levels seen in other recessions, and since the summer millions of Americans have entered into poverty," wrote Wade. "Despite that, Congress has not issued direct cash payments to Americans since $1200 checks were distributed in April. Instead, the Senate and House have gone back and forth on different proposals for aid packages throughout the fall without reaching a consensus."

Beyond Wade's observation, the description seems remarkably accurate. Last month, McConnell promised the press said that he hasn't faced any health issues, was seen with purple lips, bruises on his face and a hand that had turned a dark purplish covered in bandages. It's an ironic health problem given Dickens' description of Scrooge"

"The cold within him froze his old features, nipped his pointed nose, shriveled his cheek, stiffened his gait; made his eyes red, his thin lips blue; and spoke out shrewdly in his grating voice," the book reads.

McConnell's COVID-19 stimulus proposal wasn't even considered by the House, White House and Senators who were working on a deal. Slate described the proposal so bad that it was "worse than doing nothing."

McConnell spent nearly a decade hoarding government funds with the exception of the corporate bailout in 2017 that Republicans claimed would be a genius tax cut to help Americans. It failed.

Dickens describes Scrooge as "a squeezing, wrenching, grasping, scraping, clutching, covetous, old sinner! Hard and sharp as flint,… secret, and self-contained, and solitary as an oyster."

News broke Wednesday when emails were published from President Donald Trump's appointee Paul Alexander told higher-ups that there was no way to stop the COVID-19 spread. His solution, the emails revealed, were, "We want them all infected," he said about "infants, kids, teens, young people, young adults, middle-aged," who he falsely said, "have zero to little risk."

States and municipalities have had to foot the bill for so much of the pandemic as Congress tied so many strings to what funds could be spent on from the first stimulus. Now those funds are about to sunset before some cities have been able to wade through the legal paperwork and fully distribute the money. All Congress would have to do is reallocate those unspent funds and if they felt taken by the holiday spirit, kick in a little bit more. McConnell said no.

“If they would rather die, they had better do it, and decrease the surplus population," said Scrooge in the Dickens' classic.

Meanwhile, without the law, eviction moratoriums will lapse and people will be removed from their homes in the dead of winter. For those able to hold onto their homes, the high cost of heat could quickly become a luxury. Still, McConnell said no.

“There is nothing on which it is so hard as poverty; and there is nothing it professes to condemn with such severity as the pursuit of wealth!” Scrooge proclaimed.

Despite his chant of "Bah! Humbug!" Scrooge eventually found the light.

“Men’s courses will foreshadow certain ends, to which, if persevered in, they must lead,” said Scrooge. “But if the courses be departed from, the ends will change. Say it is thus with what you show me!”

The same isn't expected of McConnell.