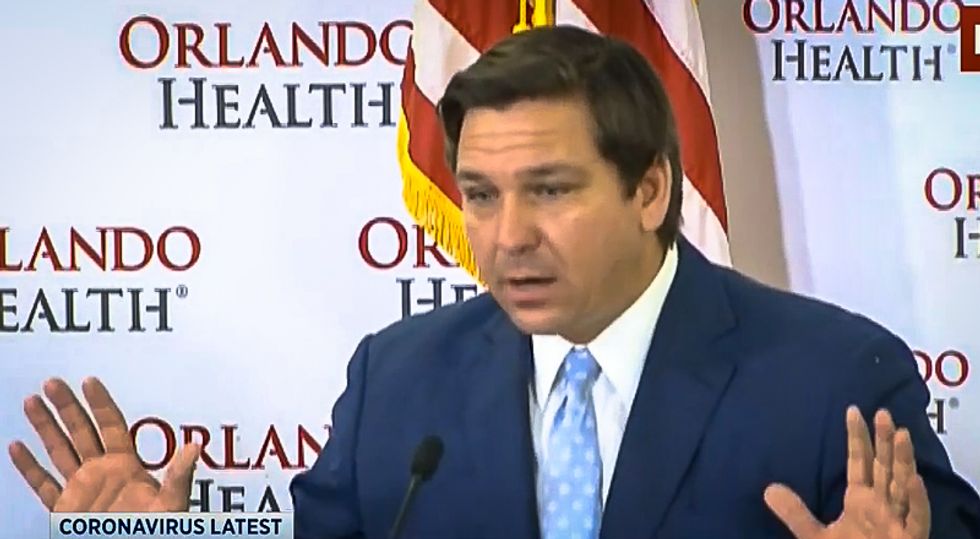 On Tuesday, The Daily Beast reported that some experts believe that Florida's vaccination plans are inadequate and unlikely to hold off yet another surge in the state.

"Florida’s strategy, a draft of which is available here, is to rush 55 percent of its initial supply of 180,000 doses of Pfizer’s genetically engineered 'messenger RNA' vaccine — enough to vaccinate 90,000 people, assuming no spoilage — to big hospitals for vaccinating their own staffs," reported David Axe. "The state is setting aside the remaining 45 percent of doses for people in nursing homes. It appears likely that proportion will also apply to the rest of the approximately one million doses Florida expects to receive from Pfizer before the end of the month."

"What makes Florida’s plan so controversial is that, unlike many other large states, Florida authorities have declined to restrict businesses and schools or to mandate mask-wearing. Those policies have left Floridian essential workers no choice but to work among an especially infective public and risk exposure," continued the report. "As it stands, Florida’s hundreds of thousands of essential workers must wait, probably for months, until Pfizer can produce and ship a lot more of the vaccine."

This means that several classes of essential workers, like teachers and grocery store workers, have no workplace protections and no priority for the vaccine — needlessly allowing the virus to spread in critical areas.

Making matters worse, according to the report, "DeSantis has not detailed a plan to rush vaccines to communities of color that, owing to structural disadvantages going back generations, are uniquely vulnerable to the virus. In Florida as in many other states, there’s significant overlap between essential workers and communities of color, further underscoring the importance of vaccinating these groups as fast as possible."

DeSantis is already facing controversy following a police raid on a former data scientist who claims his health officials have been systematically cooking the books on the COVID case count.

"Florida’s nearly 22 million people could get more, and more equitable, overall protection from the state’s initial batches of the vaccine if authorities diverted a portion of the early doses to essential workers," said the report. "But even that strategy won’t prevent the hardship that all the experts said is coming — or reverse the harm DeSantis has already inflicted on his state."