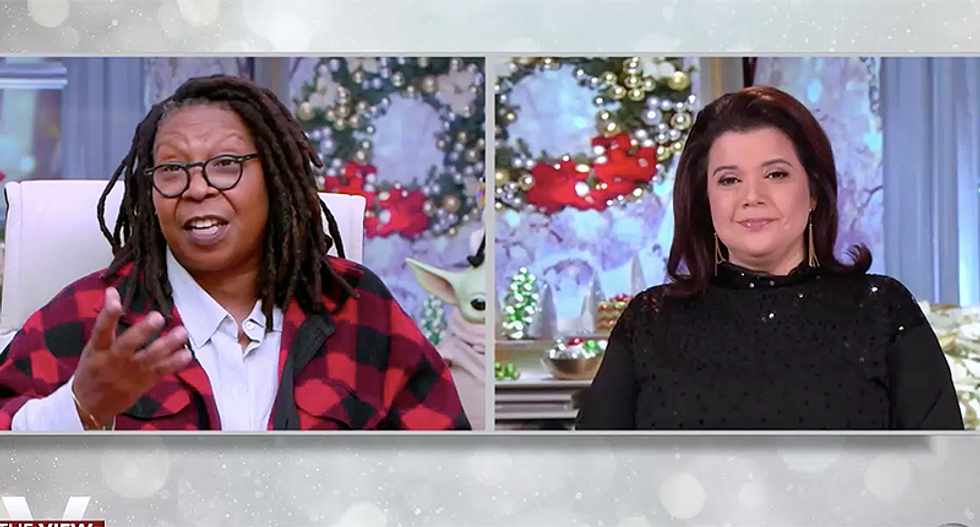 The co-hosts of "The View" debated whether or not the White House staff should be among the first to get the COVID-19 vaccine when so many of them have already had the virus, some don't believe it and others have been anti-science from the beginning.

"I thought you were immune," she said, quoting Trump. "You're getting vaccinated? I don't understand. That's why I just -- I have to throw it to you. What do you think of that conversation, Joy?"

Joy Behar gave them the benefit of the doubt and said that she considers White House staff to be "essential workers," but Ana Navarro said that they all have the antibodies and don't even need the vaccine.

"Do you think he's just scared to take it?" Goldberg asked Sunny Hostin. "He just don't want to take it because he's scared because maybe it's going to start the zombie apocalypse?"

A laughing Hostin agreed, saying she does "wonder about that since he doesn't believe in science. I agree with joy in the sense that this is our administration, and we do want the administration running our government, running our country to be safe and healthy, and so I do think that it would go a long way for the president to televise taking the vaccine because we know that they have downplayed the virus. They've continuously downplayed the need for social distancing and masks. They have had these superspreader rallies."

Now, she said, only 60 percent of Americans are saying they'll take the vaccine when the U.S. needs 70 percent to ensure herd immunity.

"So, I think it would go a long way if the president just did it on television," Hostin encouraged. "Let's see it. Let's see him do it."

Sara Haines agreed the president should be vaccinated, but she said that there should be a rush to vaccinate health care workers first, and only after they are taken care of should Trump be allowed to get it.

"Girl, look, first of all, they're going to be on the front line for another five weeks, okay?" said Ana Navarro. "Because the electoral votes are coming in today. Joe Biden is going to be sworn in January 20th, and Donald Trump and everybody in that White House is about to lose their job. Then, you know, I also think, oh my God. Can you imagine if this guy rolls up his sleeve and we actually see his arm? We might know what color his skin is under all that pancake makeup he wears on his face. But listen. On a serious note, these are folks who have called COVID a hoax, who have downplayed it for months, who have held superspreader events and continue to do so as we speak with White House parties."

She noted that the White House has mocked scientists and those who wear a mask, and those who know Trump have gotten "Cadillac medical care," she said.

They "get access to cocktails -- experimental cocktails that the rest of Americans don't, and they have been putting other Americans at risk with their reckless behavior for months and months and months," Navarro continued. "So, no. I don't think they should be among the first to get it because they're not going to be there for much longer because they haven't been productive. In just a matter of weeks, these guys are going to be, you know -- they're going to be trying out for 'Dancing with the Stars' and 'The Masked Singer' or gigs at Fox News. So, really they can wait along with the rest of us."