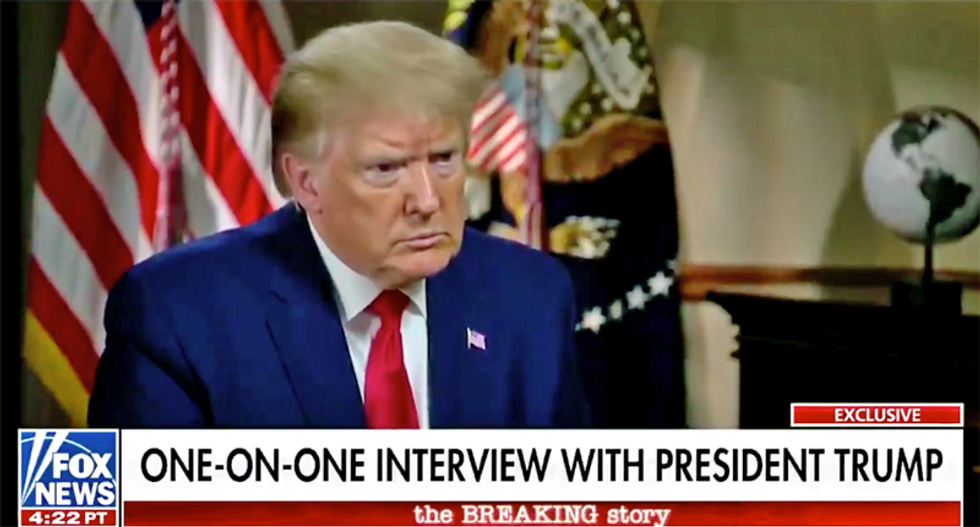 President Donald Trump has continued to hold out false hope that the 2020 presidential election could be overturned -- and has an enemies list of Fox News personalities who didn't go along with his conspiracy theories -- according to a new report.

"Right up to Monday's Electoral College vote, President Trump held the false hope that Republican-controlled state legislatures would replace electors with allies who'd overturn Joe Biden's win, two people who discussed the matter with him told Axios. The big picture: Through the past week, the sources said, the president browbeat GOP legislators in multiple states, launched tirades against Republican Govs. Doug Ducey of Arizona and Brian Kemp of Georgia, vowed to make Fox News 'pay' for accurately calling the race, and tested ways to say he didn't win without acknowledging he had lost," Swan reported.

"Trump also has been telling confidants that "people at the highest levels of Fox" have reached out to his people to try to repair the relationship but that he has no desire to do that," Axios reported. "He's focused in particular on Chris Wallace, Bret Baier and Martha MacCallum."

"Another source said that Trump seems depressed at the realization that his backers have given up on 2020: 'He's saying, 'We won these states, we won those states,'' and adding that what he took away from conversations with his pollster John McLaughlin was that if he could get as many votes as he did, he also must have won," Axios reported.

Trump reported said he will say "I don't win" to describe the outcome to avoid saying the word "lose."

Trump did lose, but has refused to concede.

Through the past week, Trump browbeat GOP legislators in multiple states, launched tirades against Doug Ducey and B… https://t.co/Hrnhsoj82x
— Axios (@Axios) 1608003014.0