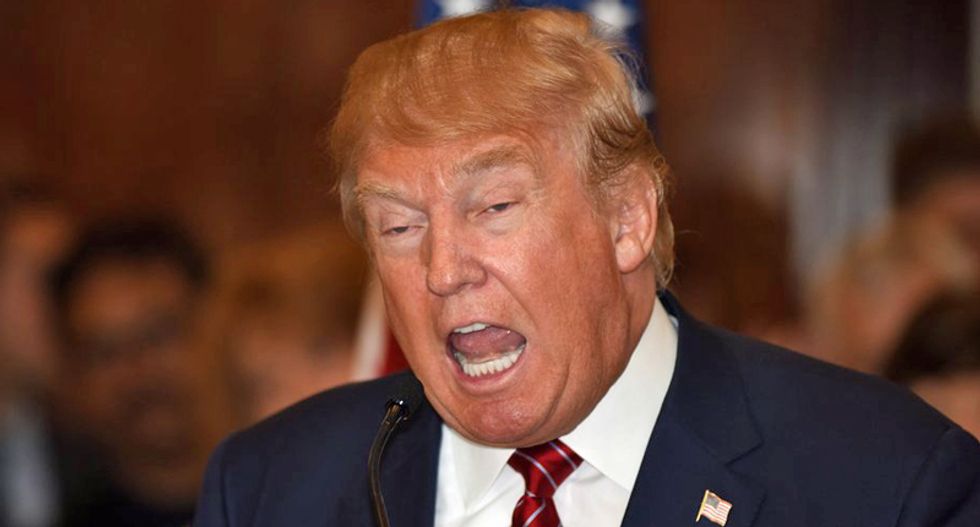 Donald Trump appears poised to accomplish the impossible: He’s about to normalize Senator Jim Inhofe of Oklahoma, one of the most distant stars in the galaxy of wingnut Republican politics.

Trump continued in a late-night tweet Thursday to jab at Inhofe over the ultra-conservative’s failure-- as chairman of the Senate Armed Services Committee -- to secure a couple of Trump’s pet grievances in the National Defense Authorization Act of 2021. The pouter-in-chief is demanding that an off-topic provision attacking social media companies -- by removing some liability protections -- be included in the annual defense bill.

Trump had previously threatened to veto the bill over a provision that would remove the names of Confederate military officers from 10 U.S. military installations. Slavery, of course, is one of the few U.S. institutions Trump has failed to attack during the past four years.

Here’s Trump latest threat if he doesn’t get his way:

What’s especially stunning about Trump calling out Inhofe is that the right-wing senator carried Trump’s water as far as he could in humoring his grievances. As recently as November 19, the military newspaper Stars and Stripes reported that Inhofe was blocking the defense bill over the base renaming issue.

And though Inhofe claims to have mollified the president with compromise language assigning the renaming to a commission, he apparently didn’t have so much luck in calming Trump’s rage against social-media giants. Trump is demanding repeal of a tech liability provision-- known colloquially as “Section 230” -- to be included in the unrelated defense bill. Even Inhofe couldn’t come through on that, despite his own sympathy to the cause.

Inhofe told The Hill that he’d discussed Section 230 with Trump:

“Pressed on what the president’s reaction was, Inhofe demurred but added that Trump “doesn’t like 230 and I don’t like 230. First of all 230 has nothing to do with the military. And I agree with his sentiments we ought to do away with 230 but you can’t do it in this bill. That’s not a part of the bill,” Inhofe told reporters.”

Obviously, that wasn’t good enough for the raging Trump, who is lashing out hourly at even some of his most loyal supporters if they fail to do the last thing he wants before getting perp-walked out of the White House. By imperiling the defense bill, Trump would be sending Republicans home to explain, over the holidays, why they couldn’t get continued funding -- including pay raises -- for the nation’s military.

Inhofe is 86 -- albeit with the politics of a man of 186 -- and it’s safe to say this is one of the first times in his 34-year career in Congress (including 26 in the Senate) that he has found himself under attack from his right flank. Most groups that measure Congressional voting records don’t consider Inhofe to have a right flank.

But the extremist senator comes across as uncommonly normal on his Twitter feed:

Inhofe prides himself on working across the aisle on some issues, but the notion that he is getting attacked by Trump for not holding firm to far-right talking points is pretty amazing. While Inhofe has hardly crusaded for reason on Trump’s obsessions with social media and revering the Confederacy, he is among the last senators to look all RINO snowflake on any topic with a hint of red meat to it.

For example, Inhofe’s preeminent claim to wingnut fame is his stature as the Republicans’ preeminent climate denier, which is saying something. Inhofe famously threw a snowball on the Senate floor in 2015 to disprove the existence of global warming, prompting the normally docile NBC weatherman Al Roker to exclaim, “What a moron!”

If the title of Inhofe’s book, “The Greatest Hoax: How the Global Warming Conspiracy Threatens Your Future,” doesn’t speak for itself, this passage from Inhofe’s 2005 Senate speech does: “Global warming is the greatest hoax ever perpetrated on the American people. It was true when I said it before, and it remains true today. Perhaps what has made this hoax so effective is that we hear over and over that the science is settled and there is a consensus that, unless we fundamentally change our way of life by limiting greenhouse gas emissions, we will cause catastrophic global warming. This is simply a false statement.”

Now, that’s the Inhofe who people have come to know over the years, the one whose open hatred of the LGBTQIA community makes Mike Pence look like a Pride festival organizer in comparison. Among his bigotry credits, Inhofe favors a constitutional amendment to ban same-sex marriage, refuses to hire openly gay staffers, stalled the appointment in 1999 for the nation’s first openly gay ambassador-- for being gay -- has voted against adding sexual orientation to the list of protected classes for hate crimes and protested loudly over military members marching in a San Diego Pride Parade.

Inhofe also is a fervent opponent of affirmative action and actually voted to repeal the Disadvantaged Business Enterprise Program. In 2009, he said the “birthers” slandering President Barack Obama “had a point.” But not even those wingnut chops are enough to satiate Trump as he rages over not getting his way about kicking social media in a defense bill.

Inhofe just won reelection to his fifth term this year, which means he’d be 92 if he goes for it again in 2026. He better expect a primary if he runs.