US labor board challenges Google moves against activist employees 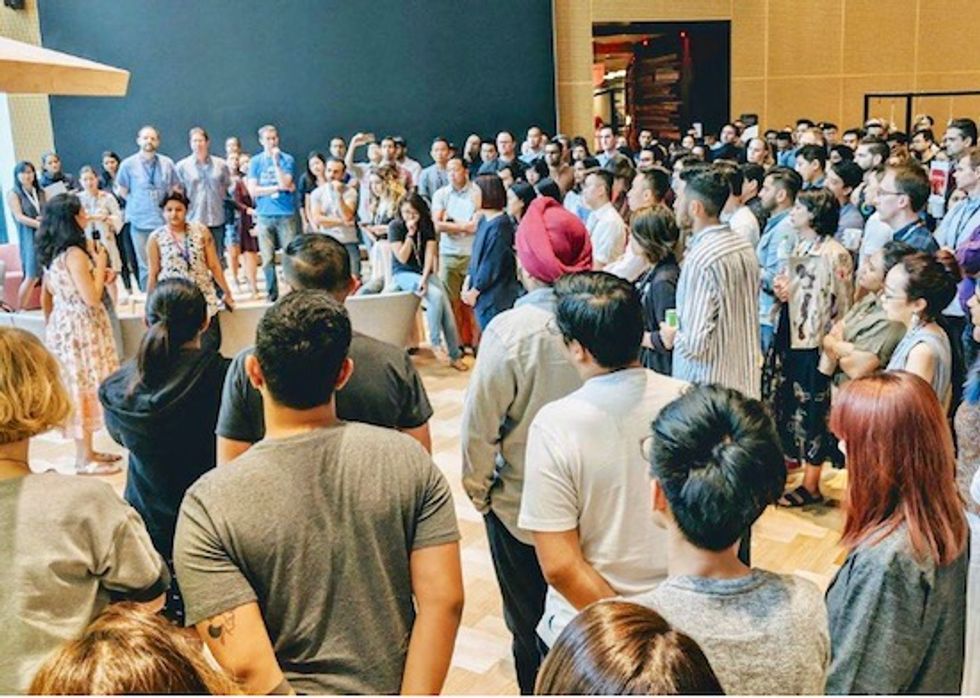 Google employees gather in a common area to attend the Google Walkout in Singapore, November 1, 2018 in this picture obtained from social media. Twitter @GOOGLEWALKOUT/Handout via REUTERS

Google has been given two weeks to respond to a US labor board complaint accusing the internet giant of using surveillance, interrogation and other tactics to spy on activist employees.

The National Labor Relations Board (NLRB) complaint filed late Wednesday stemmed from the dismissal a year ago of a quartet of employees dubbed the "Thanksgiving Four."

The workers sought a federal investigation into their dismissal, alleging they were sacked in retaliation for their labor organizing efforts, while Google maintained that the employees had violated data security policies.

A copy of the NLRB complaint seen by AFP contended that Google "surveilled" employees by peeking at slides being preparing in support of unionizing workers.

Google also "interrogated employees about protected activities" and threatened reprisals for venturing outside official company channels for handling complaints on such matters as workplace conduct, according to the complaint.

In addition, Google selectively applied rules to workers who participated in activist activities, it contended.

"It's vindicating," Laurence Berland, one of the employees in the complaint, told AFP.

"It's become clear that Google's actions are not defensible, and not just legally."

Google has until December 16 to file an answer. A hearing is slated for April 12 in San Francisco.

"We strongly support the rights our employees have in the workplace, and open discussion and respectful debate have always been part of Google," a spokesperson told AFP.

"We're proud of our culture and committed to defending it against attempts by individuals to deliberately undermine it -- including by violating security policies and internal systems," the spokesperson said.

Google added that it will continue to provide information to the NLRB about its decisions to terminate or discipline employees.

Unhappy with the way the company was behaving, Berland said he and other workers had "acted together to do something about it."

"I was just doing my part in that."

Thousands of Google employees joined a coordinated worldwide walkout late in 2018 to protest its handling of sexual harassment.

The protests took shape after Google said it had fired 48 employees in the previous two years -- including 13 senior executives -- as a result of allegations of sexual misconduct.

Google employees have also protested against the company's business contracts related to war or policing of the US border, and against creation of a search engine for China's censored market.

"Employees who speak out on ethical issues, harassment, discrimination and all these matters are no longer really welcome at Google in the way they used to be," Berland said.

"I think it is part of a shift in culture there."