Space Blocs: The future of international cooperation in space is splitting along lines of power on Earth

The Conversation
images.theconversation.com
Even during times of conflict on the ground, space has historically been an arena of collaboration among nations. But trends in the past decade suggest that the nature of cooperation in space is shifting, and fallout from Russia’s invasion of Ukraine has highlighted these changes.

I’m an international relations scholar who studies power distributions in space – who the main players are, what capabilities they possess and whom they decide to cooperate with. Some scholars predict a future in which single states pursue various levels of dominance, while others foresee a scenario in which commercial entities bring nations together.

But I believe that the future may be different. In the past few years, groups of nations with similar strategic interests on Earth have come together to further their interests in space, forming what I call “space blocs.” 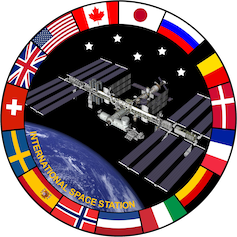 The International Space Station is the quintessential example of international collaboration in space.

From state-led space efforts to collaboration

The U.S. and the Soviet Union dominated space activities during the Cold War. Despite tensions on the ground, both acted carefully to avoid causing crises and even cooperated on a number of projects in space.

In 1975, 10 European nations founded the European Space Agency. In 1998 the U.S. and Russia joined efforts to build the International Space Station, which is now supported by 15 countries.

These multinational ventures were primarily focused on scientific collaboration and data exchange.

The emergence of space blocs

The European Space Agency, which now includes 22 nations, could be considered among the first space blocs. But a more pronounced shift toward this type of power structure can be seen after the end of the Cold War. Countries that shared interests on the ground began coming together to pursue specific mission objectives in space, forming space blocs.

These groups allow for nations to collaborate closely with others in their blocs, but the blocs also compete with one another. Two recent space blocs – the Artemis Accords and the Sino-Russian lunar agreement – are an example of such competition. 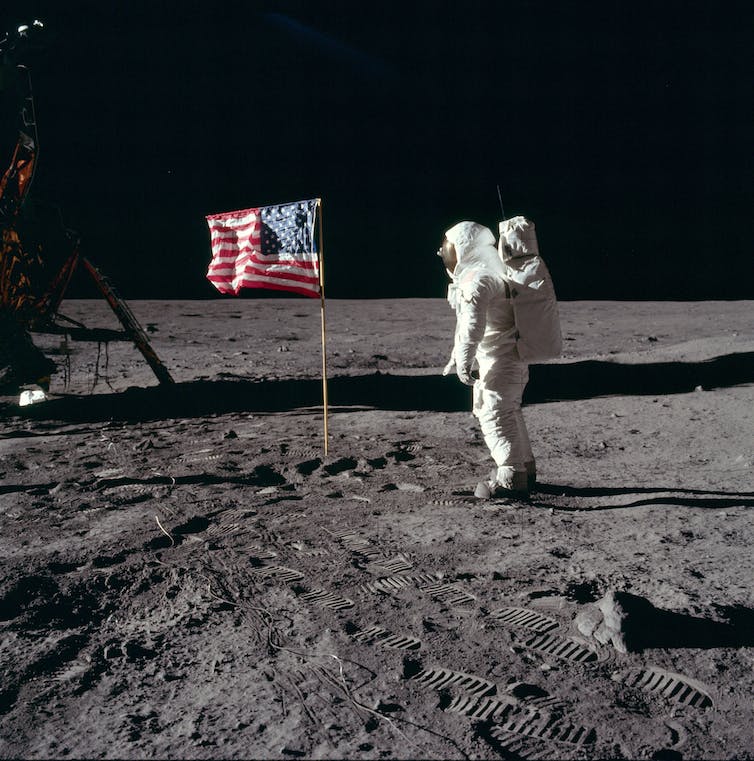 No human has been on the Moon in 50 years, but in the next decade, both the U.S.-led Artemis Accords and a Chinese-Russian mission aim to establish Moon bases.

Race to the Moon

The Artemis Accords were launched in October 2020. They are led by the U.S. and currently include 18 country members. The group’s goal is to return people to the Moon by 2025 and establish a governing framework for exploring and mining on the Moon, Mars and beyond. The mission aims to build a research station on the south pole of the Moon with a supporting lunar space station called the Gateway.

Similarly, in 2019, Russia and China agreed to collaborate on a mission to send people to the south pole of the Moon by 2026. This joint Sino-Russian mission also aims to eventually build a Moon base and place a space station in lunar orbit.

That these blocs do not collaborate to accomplish similar missions on the Moon indicates that strategic interests and rivalries on the ground have been transposed to space.

Any nation can join the Artemis Accords. But Russia and China – along with a number of their allies on Earth – have not done so because some perceive the accords as an effort to expand the U.S.-dominated international order to outer space.

Similarly, Russia and China plan to open their future lunar research station to all interested parties, but no Artemis country has expressed interest. The European Space Agency has even discontinued several joint projects it had planned with Russia and is instead expanding its partnerships with the U.S. and Japan.

The impact of space blocs on the ground

In addition to seeking power in space, countries are also using space blocs to strengthen their spheres of influence on the ground.

One example is the Asia-Pacific Space Cooperation Organization, which was formed in 2005. Led by China, it includes Bangladesh, Iran, Mongolia, Pakistan, Peru, Thailand and Turkey.

While its broad goal is the development and launch of satellites, the organization’s major aim is to expand and normalize the use of the Chinese BeiDou navigation system – the Chinese version of GPS. Countries that use the system could become dependent on China, as is the case of Iran.

The role of private space companies 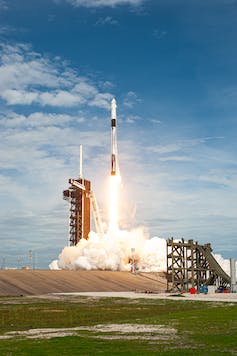 Private companies are now major players in space, but launches – like SpaceX’s many missions – are still under the jurisdiction of the companies’ home nations.

There has been tremendous growth of commercial activities in space in the past decade. As a result, some scholars see a future of space cooperation defined by shared commercial interests. In this scenario, commercial entities act as intermediaries between states, uniting them behind specific commercial projects in space.

[Get The Conversation’s most important coronavirus headlines, weekly in a science newsletter]

However, commercial enterprises are unlikely to dictate future international cooperation in space. According to current international space law, any company that operates in space does so as an extension of – and under the jurisdiction of – its home nation’s government.

The dominance of states over companies in space affairs has been starkly exemplified through the Ukraine crisis. As a result of state-imposed sanctions, many commercial space companies have stopped collaborating with Russia.

Given the current legal framework, it seems most likely that states – not commercial entities – will continue to dictate the rules in space.

Space blocs for collaboration or conflict

I believe that going forward, state formations – such as space blocs – will serve as the major means through which states further their national interests in space and on the ground. There are many benefits when nations come together and form space blocs. Space is hard, so pooling resources, manpower and know-how makes sense. However, such a system also comes with inherent dangers.

History offers many examples showing that the more rigid alliances become, the more likely conflict is to ensue. The growing rigidity of two alliances – the Triple Entente and the Triple Alliance – at the end of 19th century is often cited as the key trigger of World War I.

A key lesson therein is that as long as existing space blocs remain flexible and open to all, cooperation will flourish and the world may yet avoid an open conflict in space. Maintaining the focus on scientific goals and exchanges between and within space blocs – while keeping political rivalries at bay – will help to ensure the future of international cooperation in space.