Humans are the only species to live in every environmental niche in the world – from the icesheets to the deserts, rainforests to savannahs. As individuals we are rather puny, but when we are socially connected, we are the most dominant species on the planet.

New evidence from stone tools in southern Africa shows these social connections were stronger and wider than we had thought among our ancestors who lived around 65,000 years ago, shortly before the large “out of Africa” migration in which they began to spread across the world.

The early humans weren’t always so connected. The first humans to leave Africa died out without this migratory success and without leaving any genetic trace among us today.

But for the ancestors of today’s people living outside of Africa, it was a different story. Within a few thousand years they had migrated into and adapted to every type of environmental zone across the planet.

Archaeologists think the development of social networks and the ability to share knowledge between different groups was the key to this success. But how do we observe these social networks in the deep past?

To address this question, archaeologists examine tools and other human-made objects that still survive today. We assume that the people who made those objects, like people today, were social creatures who made objects with cultural meanings.

A small, common stone tool gave us an opportunity to test this idea in southern Africa, during a period known as the Howiesons Poort around 65,000 years ago. Archaeologists call these sharp, multipurpose tools “backed artifacts”, but you can think of them as a “stone Swiss Army knife”: the kind of useful tool you carry around to do various jobs you can’t do by hand.

These knives are not unique to Africa. They are found across the globe and come in many different shapes. This potential variety is what makes these small blades so useful to test the hypothesis that social connections existed more than 60,000 years ago. 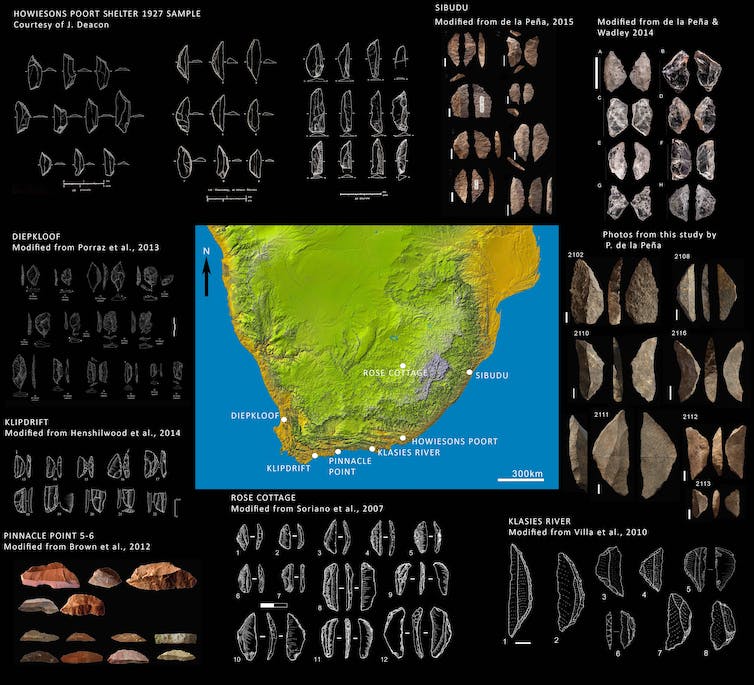 Across southern Africa, these blades could have been made in any number of different shapes in different places. However, around 65,000 years ago, it turns out they were made to a very similar template across thousands of kilometres and multiple environmental niches.

The fact they were all made to look so similar points to strong social connections between geographically distant groups across southern Africa at this time.

Importantly, this shows for the first time that social connections were in place in southern Africa just before the big “out of Africa” migration.

A useful tool in hard times

Previously it has been thought people made these blades in response to various environmental stresses, because just like the Swiss Army knife they are multi-functional and multi-use.

There is evidence the stone blades were often glued or bound to handles or shafts to make complex tools such as spears, knives, saws, scrapers and drills, and used as tips and barbs for arrows. They were used to process plant material, hide, feathers and fur.

During the Howiesons Poort, these blades were produced in enormous numbers across southern Africa.

Data from Sibudu Cave in South Africa shows that their peak in production occurred during a very dry period, when there was less rain and vegetation. These tools were manufactured for thousands of years before the Howiesons Poort, but it is during this period of changing climatic conditions that we see a phenomenal increase in their production.

It is the multi-functionality and multi-use which makes this stone tool so flexible, a key advantage for hunting and gathering in uncertain or unstable environmental conditions.

A strong social network adapted to a changing climate

However, the production of this tool at this time cannot be seen as only a functional response to changing environmental conditions.

This means the increase in production should be seen as part of a socially mediated response to changing environmental conditions, with strengthening long-distance social ties facilitating access to scarce, perhaps unpredictable resources.

The similarity in the stone “Swiss Army knife” across southern Africa provides insight into the strength of social ties in this key period for human evolution. Their similarity suggests that it was the strength of this social network which allowed populations to prosper and adapt to changing climatic conditions.

These findings hold global implications for understanding how expanding social networks contributed to the expansion of modern humans out of Africa and into new environments across the globe.