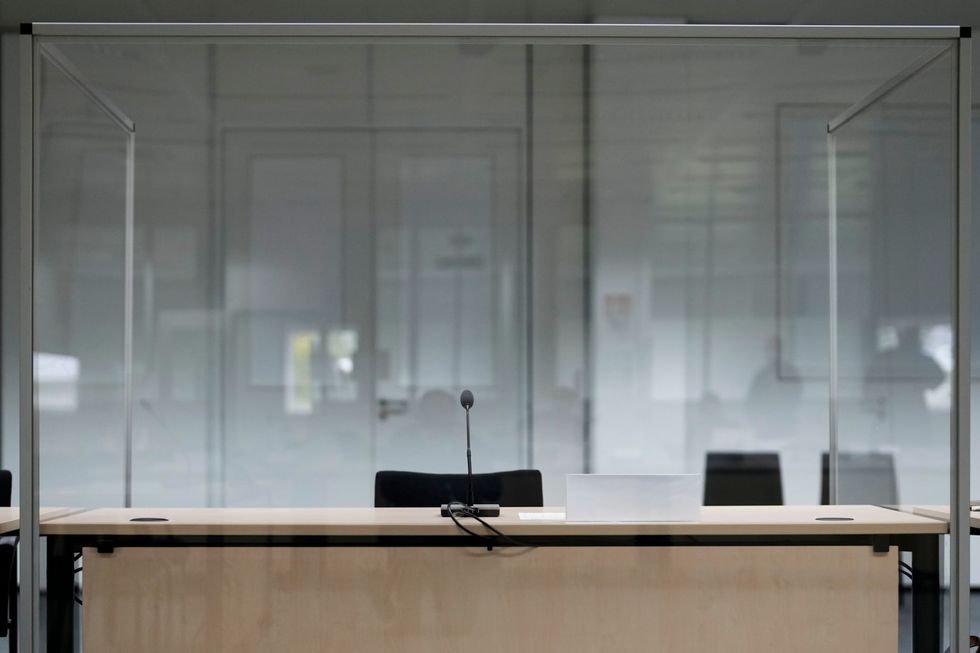 The defendant's seat is empty before the trial of a 96-year-old former secretary to the SS commander of the Stutthof concentration camp during World War II. The defendant in the trial for aiding and abetting murder in over 11,000 cases is a fugitive. The district court has issued a warrant for her arrest. Markus Schreiber/AP-POOL/dpa

Authorities in Germany have located a 96-year-old former Nazi concentration camp secretary who failed to turn up for the start of her trial in Germany on Thursday, a court spokeswoman said.

Irmgard Furchner, who is charged with complicity in the murders of more than 10,000 people, "has been found", said Frederike Milhoffer, a spokeswoman for the court, adding that the judge will determine whether to remand her in custody.

Furchner had failed to turn up for the start of her trial in Germany on Thursday, the judge said earlier, issuing an arrest warrant for the "fugitive" at the dramatic hearing.

One of the first women to be prosecuted for Nazi-era crimes in decades, Furchner is charged with complicity in thousands of murders at the Stutthof concentration camp in occupied Poland.

She left her retirement home near Hamburg on Thursday morning and took a taxi to a subway station, said Frederike Milhoffer, a spokeswoman for the court in the northern German town of Itzehoe.

But she failed to turn up at the trial.

A spokeswoman for the police in Itzehoe had told AFP they were searching for Furchner and "do not know where she is".

The defendant's lawyer, Wolf Molkentin, was present in the court room but did not make a statement to journalists.

Prosecutors accuse Furchner of having assisted in the systematic murder of detainees at Stutthof, where she worked in the office of the camp commander, Paul Werner Hoppe, between June 1943 and April 1945.

The trial is taking place in a youth court as she was aged between 18 and 19 at the time.

Around 65,000 people died at the camp, not far from the city of Gdansk, among them "Jewish prisoners, Polish partisans and Soviet Russian prisoners of war", according to the indictment.

After long reflection, the court decided in February that Furchner was fit to stand trial.

"Healthy enough to flee, healthy enough to go to jail!," Efraim Zuroff, an American-Israeli "Nazi hunter" who has played a key role in bringing former Nazi war criminals to trial, tweeted on Thursday.

The planned opening of the trial in Itzehoe came one day before the 75th anniversary of the sentencing of 12 senior members of the Nazi establishment to death by hanging at the first Nuremberg trial.

It also comes a week before separate proceedings in Neuruppin, near Berlin, against a 100-year-old former camp guard.

Seventy-six years after the end of World War II, time is running out to bring people to justice for their role in the Nazi system.

Prosecutors are currently handling a further eight cases, including former employees at the Buchenwald and Ravensbrueck camps, according to the Central Office for the Investigation of National Socialist Crimes.

In recent years, several cases have been abandoned as the accused died or were physically unable to stand trial.

The last guilty verdict was issued to former SS guard Bruno Dey, who was handed a two-year suspended sentence in July at the age of 93.

Furchner is the only woman to stand trial in recent years for crimes dating to the Nazi era, as the role of women in the Third Reich has long been overlooked.

But since John Demjanjuk, a guard at a concentration camp, was convicted for serving as part of the Nazi killing machine in 2011, prosecutors have broadened the scope of their investigations beyond those directly responsible for atrocities.

According to Christoph Rueckel, a lawyer representing survivors of the Shoah who are party to the case, Furchner "handled all the correspondence" for camp commander Hoppe.

"She typed out the deportation and execution commands" at his dictation and initialled each message herself, Rueckel told public broadcaster NDR.

However, Furchner's lawyer told the German weekly Spiegel ahead of the trial that it was possible the secretary had been "screened off" from what was going on at Stutthof.

At least three other women have been investigated for their roles in Nazi camps, including another secretary at Stutthof, who died last year before charges could be brought.

The prosecutor's office in Neuruppin is currently looking into the case of a woman employed at the Ravensbrueck camp, according to officials at the Central Office in Ludwigsburg.

Among the women to be held to account for their actions during the Nazi era was Maria Mandl, a guard at the Auschwitz-Birkenau camp, who was hanged in 1948 after being sentenced to death in Krakow, Poland.

Between 1946 and 1948, in Hamburg, 21 women went on trial before a British military tribunal for their role at the Ravensbrueck concentration camp for women.