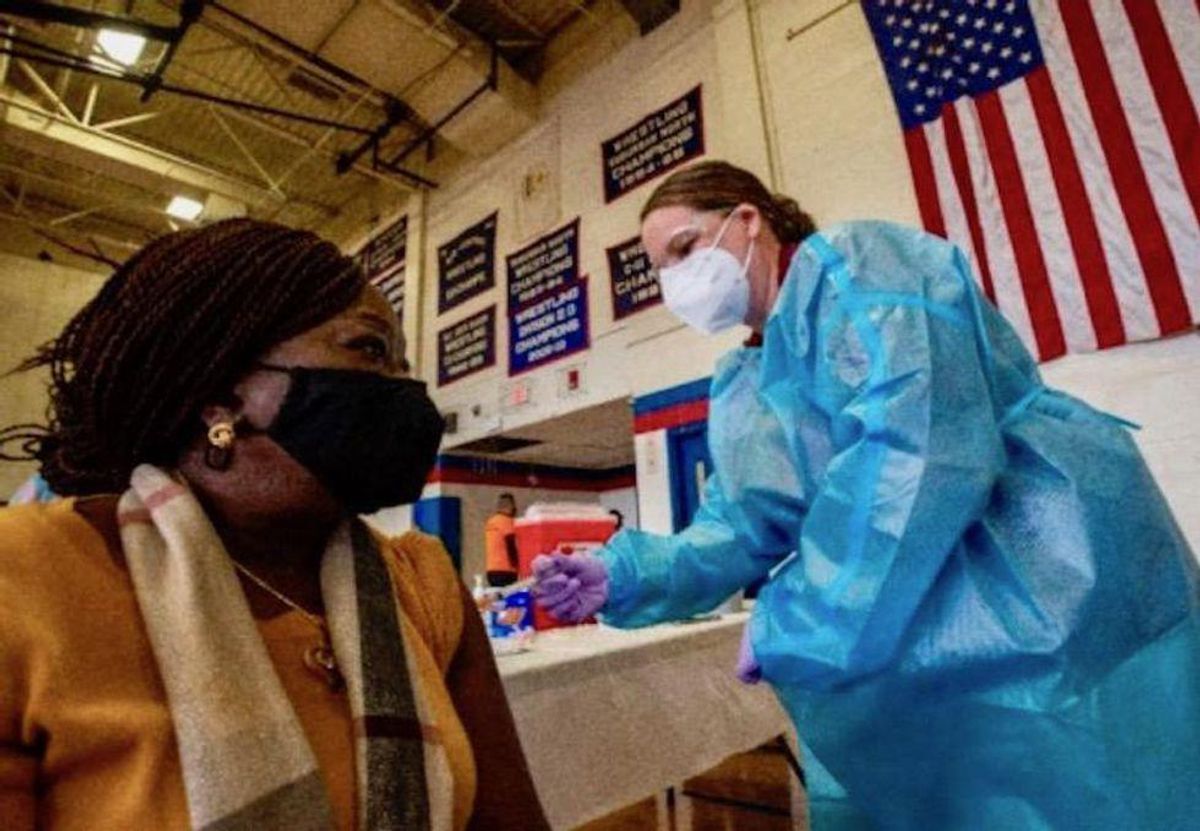 Doris Norman gets the Covid-19 vaccine in the United States, AFP)

"Delta is different from previous strains," one of the slides reads, summarizing that the variant is "highly contagious," "likely more severe," and "breakthrough infections may be as transmissible as unvaccinated cases." The presentation says Delta is more contagious than Ebola, the seasonal flu, the flu of 1918, and smallpox.

Dr. Rochelle Walensky, the director of the CDC, confirmed the authenticity of the leaked document in an interview with CNN.

"I think people need to understand that we're not crying wolf here. This is serious," Walensky said. "It's one of the most transmissible viruses we know about. Measles, chickenpox, this—they're all up there."

An unnamed federal official told the New York Times that the CDC is expected to publish additional data on the Delta variant on Friday.

"The CDC is very concerned with the data coming in that Delta is a very serious threat that requires action now," the official said.

Some public health experts who reviewed the CDC document said they are now even more worried about the Delta variant, which was first detected in India in December and has since spread to more than 100 countries. The U.S. is currently averaging around 71,000 new coronavirus cases a day, with more than 80% of those attributable to the Delta strain.

"I finished reading it significantly more concerned than when I began," Robert Wachter, chairman of the Department of Medicine at the University of California at San Francisco, told the Post.

But Dr. Ashish Jha, dean of the Brown University School of Public Health, said that while the document makes clear the Delta variant is a major issue, he found the presentation to be "largely reassuring."

"Bottom line? Yeah, Delta variant is bad. Like really bad," Jha wrote in a series of tweets late Thursday. But, he added: "Our vaccines are good. Like really good. Breakthrough infections happen, sometimes they may spread to others. But if enough people get the shot, the pandemic does come to an end."

In addition to full vaccination, the CDC document recommends "universal masking" as a way to control the spread of the Delta variant. That advice is significantly more sweeping than the guidance the CDC released to the public earlier this week, which recommended that vaccinated people wear masks in public indoor spaces only in areas of the country where cases are surging.

The agency's presentation surfaced as President Joe Biden announced Thursday that federal civilian employees who do not show proof of vaccination will be required to wear a mask, undergo coronavirus testing once or twice per week, and socially distance. The president also vowed to "continue to do everything I can to encourage the unvaccinated to get vaccinated."