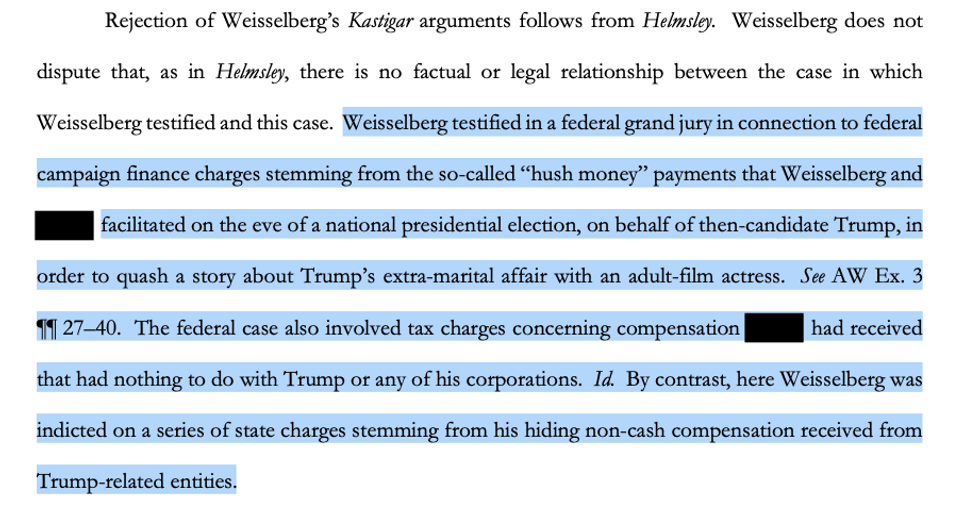 "Weisselberg testified in a federal grand jury in connection to federal campaign finance charges stemming from the so-called 'hush money' payments that Weisselberg and [redacted] facilitated on the eve of a national presidential election, on behalf of then-candidate Trump, in order to quash a story about Trump’s extra-marital affair with an adult-film actress," the DA's documents say, confirming the affair of adult film star Stormy Daniels.

In the second count of the filing, the prosecutors reject Weisselberg's claim that they learned all of their information from the federal government in an effort to charge Weisselberg. The problem, the prosecutors explain, is they actually didn't. They say that even if they did get the information from Cohen, it didn't violate anything because it involves completely different and unrelated cases.

"A defendant (who was granted immunity in a separate, unrelated investigation years earlier) cannot even claim that the person against whom he gave immunized testimony has, in turn, testified in the subsequent case against the defendant," the document says.

In the third point, prosecutors reply to the claim that Cohen's vengeance against Weisselberg is what is leading the court to go after him. Here again, Cohen's name is redacted.

"First, Weisselberg’s argument that [Cohen] was tainted by a desire to obtain revenge against Weisselberg because Weisselberg’s immunized testimony led to [Cohen's] indictment and conviction finds no non-speculative support in the record," said the documents. "To advance his argument, Weisselberg asks this Court to infer that [Cohen] was aware of the fact of the federal testimony; assumed, without knowing, that it reflected negatively on him; and then essentially retaliated against Weisselberg by 'cooperating' with the Office’s investigation."

They explain that they took copious notes at every interview, but at no point could Weisselberg point to evidence that proves Cohen has it out for him.

"On the contrary, when asked about his motivation for providing information to investigators, [Cohen] rejected the idea that he was motivated by anger at Weisselberg’s testimony, and explained that he 'didn’t want to be a scapegoat for [Trump’s] dirty deeds,'" said the document.

They noted that Cohen has a book, has done many interviews, and operating his own podcast and the only thing that Weisselberg can point to that illustrates Cohen is out to destroy him are a few tweets prior to the indictment -- and none of them show a "vengeful motive for Cohen" to speak to the prosecutors about him.

At one point in the court document, the DA notes that Weisselberg has a record of the grand jury testimony and at no point does Cohen appear. 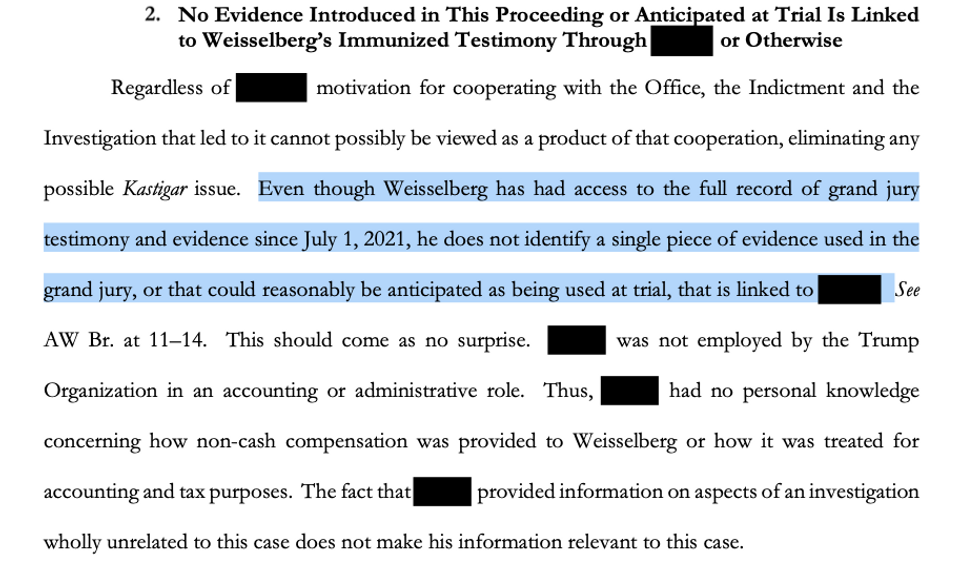 “Weisselberg fails and fails miserably in his vengeful witness defense in the fact that I never testified before the grand jury against him," said Cohen in a statement to Raw Story. "Mr. Shinerock’s opposition papers clearly demonstrate that the Trump methodology of lying and blaming others only works for Trump; all others get jail time."

“This might be the right time for Weisselberg to think about cooperating," he added.