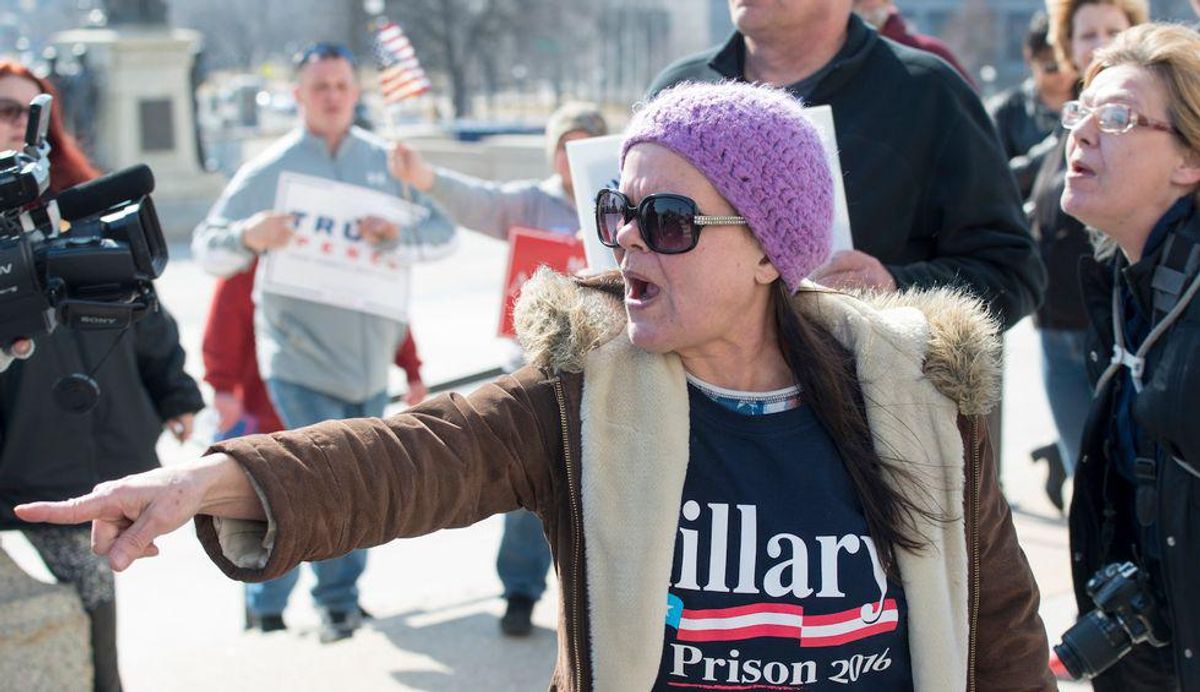 March 4, 2017 // About 700 people gathered at the Minnesota capitol building to show support for Republican President Donald Trump. This was part of "March 4 Trump events around the country. Around 100 people were also there protesting against Donald Trump. She was shouting, "Satan lies!" // 2017-03-04 This is licensed under the Creative Commons Attribution License. Credit: Fibonacci Blue

I spend a lot of time here at the Editorial Board thinking about ways of seeing familiar sociopolitical issues differently so that we, the free people of this republic, might discover new ways of solving the old problems we all live with. I would like to suggest something that may seem odd at first, but once you think about it, it makes sense. Indeed, once you think about it, it will, I hope, seem so obvious that you might wonder why we hadn't thought of it before. After reading Block's piece, it occurred to me that we're not so much going to experience "prolonged, acute civil violence" after the January 6 insuregency. We are already experiencing it and have been for years.

The American Civil War began formally when Confederate forces shelled Union troops at Fort Sumter off the coast of South Carolina. But there was plenty of informal violence beforehand. Block tells the story of Jacob Branson, a Kansas abolitionist, who got into an argument over land rights with Franklin Coleman, a slavery advocate. One day, a friend of Branson's accosted Coleman. Coleman took out his gun and shot him.

It was the start of what's now called "Bleeding Kansas," which has become shorthand for the period of bloody unrest that prefaced formal war. "A group of abolitionists led by John Brown killed five proslavery settlers in Franklin County," Daniel Block wrote. "Hundreds of slavery supporters retaliated by attacking an antislavery settlement in the town of Osawatomie, murdering several locals and burning most of the settlement to the ground. Abolitionists then drove proslavery forces out of Linn County. Slavery proponents next pulled 11 antislavery settlers from their homes and shot them down."2

Maybe we're seeing our own "Bleeding Kansas." Maybe we're seeing our own period of bloody unrest that prefaces formal war. The challenge wouldn't be asking whether a period of "prolonged, acute civil violence" is coming. It would be recognizing that it's already here. I woke up this morning to news of yet another shooting massacre, this one in Indianapolis.3 Turns out it was the third mass shooting in the city in the last month. Nationally, it came after massacres in Atlanta, Boulder, Colorado, and Orange County, California. CNN ran a graphic this morning showing mass shootings that have taken place over 30 days. There were so many they nearly burst the frame.4 Thousands of Americans have died in massacres. The political violence is here.

We are seeing so many massacres, because there are so many guns in circulation. And we are seeing so many guns in circulation, especially guns designed to kill quickly, because our government has militarized civil society by way of deregulation. Why has our government militarized civil society? Because, as I have said before, democracy stopped producing desirable outcomes. The GOP did not randomly start obstructing popular gun control measures. There was a reason. They started after the Sandy Hook Massacre, which was after the 2012 election, which showed the GOP that normal democracy could no longer be trusted to stop a Black man from being president.

That was when the Republican Party fully abandoned republican democracy. That was when norm-busting and constitutional hardball became requirements. That was when political violence started to become acceptable. Make no mistake: that's what these shooting massacres are. They seem chaotic. They seem arbitrary. Their motives are often unclear. But considered in the long stretch of history, it seems to me obvious that each of them, in their unique ways, was a reaction of some kind to the outcomes of republican democracy, outcomes that have given power and respect to people who had been considered unworthy of them—Black people, people of color, LGBTQ people and women. Democracy could not stop them. The only political options left were violent.

It was started out slowly, at first, but since that mind-shattering and heartbreaking moment, when 20 first-graders were shot to pieces after which the Republicans showed not a care in the world, political violence has grown in popularity. It has grown such that a huge majority of Republican voters believes the sacking and looting of the US Capitol was just peachy,5 because they believe Donald Trump was robbed. They don't need a reason, though. Stealing the election is beside the point. Political violence, even to the point of treason, has already been established as optional. We don't have to wait for the next insurgency. We're still living in the first one.

Anti-Trump detractors of the GOP are growing louder in their criticisms of Donald Trump, even as the party grows increasingly hostile toward anyone that breaks from absolute praise for the former president.

Arizona state Senate President Karen Fann was blasted on Friday for refusing to take responsibility for the legislature's widely-panned audit.