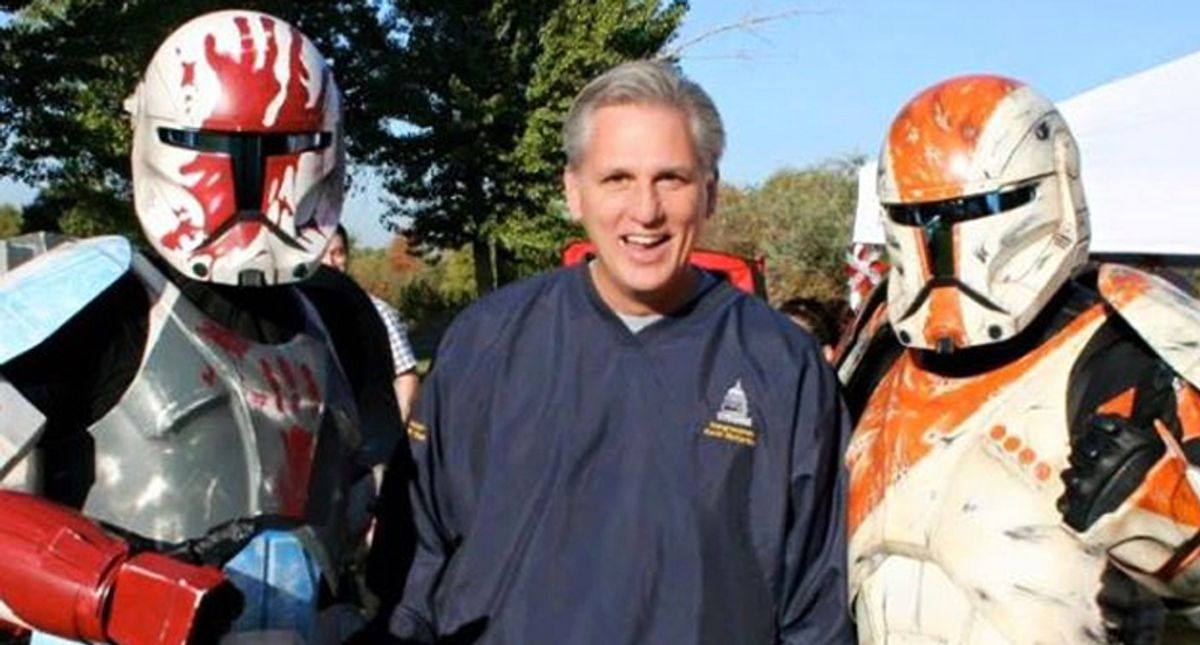 As reported last weekend, Reps. Marjorie Taylor Greene of Georgia and Paul Gosar of Arizona, perhaps the two most right-wing members of Congress, were planning to create an "America First" caucus in the House. This is similar to the way neo-Nazis, Ku Klux Klan members, and other members of explicitly white supremacist organizations beginning in the 1970s and '80s rebranded themselves as "white nationalists," with the goal of appearing more "respectable" and "mainstream." To counter that subterfuge, Greene's group could be more accurately described as the "White Power Caucus" or the "House Republican Klavern."

Punchbowl News obtained access to a seven-page statement of purpose and goals from the proposed America First Caucus, which includes such standard white supremacist talking points as: "America is a nation with a border, and a culture strengthened by a common respect for uniquely Anglo-Saxon political traditions."

In a particularly strange tangent, the document also argued that the U.S. should embrace "the progeny of European architecture, whereby public infrastructure must be utilitarian as well as stunningly, classically beautiful, befitting a world power and source of freedom."

On immigration, the America First caucus appeared to draw its inspiration from America's long history of eugenics and "race science": "Societal trust and political unity are threatened when foreign citizens are imported en-masse into a country, particularly without institutional support for assimilation and an expansive welfare state to bail them out should they fail to contribute positively to the country."

Unsurprisingly, the America First Caucus also pledged its loyalty to Donald Trump and his Big Lie about the 2020 election. In total, the notional caucus' policy platform went well beyond racist "dog whistles," and was more like a white supremacist air raid siren.

Even the name of Greene and her cabal's hate caucus signaled to some of the most shameful chapters of America's history of white supremacy and racial terror.

In a 2018 article for The Nation, historian Kevin Kruse explained the broader context of Donald Trump and his movement's invocation of the term "America First":

As the United States drifted into the First World War, nativists increasingly became concerned over the "hyphenates" in their midst: those who called themselves German-American, Irish-American, Italian-American, and the like. It was time, Wilson insisted in 1915, for every immigrant "to declare himself, where he stands. Is it America first or is it not?" Less than a decade later, the United States embraced drastic restrictions on immigration through the National Origins Act of 1924. As a Republican supporter in Congress explained, the policy simply reflected "the doctrine of America first for Americans."
Not surprisingly, the Ku Klux Klan employed "America First" in much the same way, using it to demand nothing less than "100% Americanism" — which for the group meant 100 percent white Americanism. In 1921, a circular listed the "ABCs" of the KKK: "America first, benevolence, clannishness." While the Klan was often called the "American Fascisti" during this era, the same arguments were advanced by more openly fascist organizations like William Pelley's Silver Shirts, an American counterpart to Mussolini's blackshirts and Hitler's brownshirts. "The various colored shirt orders — the whole haberdashery brigade who play upon sectional prejudice — are sowing the seeds of fascism," the writer James Waterman Wise warned. "It may come wrapped in a flag or a Hearst newspaper," he added, with "America First" on the masthead.

The Guardian's editorial board summarizes this moment: "If anyone wondered what American fascism might look like then they could start with the proposed congressional "America First Caucus", which emerged this weekend from the office of extremist Republican Marjorie Taylor Greene."

It is no coincidence that Donald Trump's white supremacist advisor, professional hate-monger and Fox News personality Stephen Miller traffics in the same language, public policies and ideas as Greene and her proposed caucus.

After Punchbowl News shared details about Greene's proposed white power caucus, it was met with outrage and condemnation by the commentariat and political chattering class. She denied ever having seen the document, and responded with contradictory claims that no such group would be formed.

Greene of course argued that she was a "victim" of a smear campaign by the "liberal news media," and in a striking display of cowardice even blamed a staff member for misrepresenting the nature of the caucus and releasing a rough draft of its founding document.

Leading Republicans and other "sensible" voices on the right condemned Greene and her theoretical caucus as a way of demonstrating their false anti-racist bonafides. Such voices claimed that the America First group's stated beliefs in the superiority of "Anglo-Saxon civilization," and its related desire to keep America a majority-white country by shutting down nonwhite immigration, represent a betrayal of the country's best traditions and values. More "traditional" Republicans also took the opportunity to denounce Greene and her cabal as a way of superficially distancing themselves and their party from the enduring stain of Trumpism.

Too much of the mainstream news media cannot conceal its hunger for a return to normalcy and its quest for "reasonable," "decent" and "traditional" Republicans. In breathless reporting, the mainstream news media and its hope peddlers, professional centrists and stenographers of current events proclaimed that Republicans were "outraged" and "disgusted" at Greene and the America First caucus. The Republican Party was once again described as descending into chaos and disarray because of Greene's latest white supremacist stunt.

But the real story of the America First Caucus is one of style versus substance: Today's Jim Crow Republican Party largely agrees with the nativist and white supremacist policies of Greene's proposed caucus. The fake outrage is really a function of public relations, reflecting how boldly such ideas and policies are being presented.

Make no mistake: Today's Republican Party is America's and the world's largest white supremacist organization. Its slide into open embrace of white supremacy with the rise of Trump and his neofascist movement did not occur overnight. That outcome took several decades, from the infamous Southern strategy of Richard Nixon's time to Reaganism, the white backlash of the Tea Party against Barack Obama and a Republican Party that is so extreme that is has more in common with neofascist political organizations in Hungary and Poland than with mainstream democratic political parties in other parts of the West.

Donald Trump's presidency and movement were and are based on white racial resentment, anxiety about a loss of white privilege and control over American society and, for many of Trump's supporters and followers, an embrace of overt white supremacy and a desire to hurt nonwhite people.

The Republican Party, its leadership and elected officials fully embraced and consistently supported Trump's policy agenda — no matter what degree of deflection or prevarication they may wish to offer. Loyalty to Trump was so extreme that the 2020 Republican platform was nonexistent: The party would do whatever Trump wanted. The so-called reasonable and traditional Republicans in Congress voted for almost every one of Trump's proposals, however racist, cruel, fascistic and anti-democratic they have been. Even "good Republicans" such as Sen. Mitt Romney of Utah, who twice voted to convict Trump for his crimes against democracy, still supported almost all of his legislation and policy positions.

Although he is no longer president, Donald Trump remains more popular among Republican voters and his followers than the party itself. Public opinion polls and other social science research has repeatedly shown that the "economic anxiety" among the "white working class" that led to the Age of Trump was primarily a function of racism, white supremacy and what experts have described as "ethnic antagonism" and fear of "displacement" by nonwhites.

On Jan. 6, Trump's followers launched a lethal coup attack on the U.S. Capitol. That act of treason was fundamentally an attack on the legitimacy of America's multiracial democracy. As shown by public opinion polls and other research, a majority of Republicans, then and now, support the Capitol attack or seek to blame it on others.

In numerous states, the Republican Party has publicly criticized or formally censured the relatively small number of elected Republicans who dared to condemn Trump's coup attack, resist his false claims of election fraud or support his impeachment.

Other research shows that Republicans, and Trump followers specifically, reject the very idea of American democracy if white people are no longer to be its dominant group.

Experimental research shows that when white participants are exposed to information suggesting that the white proportion of the population is declining, they exhibit not just social-status anxiety but fears about the literal extermination of the "white race." Such fears then lead to racial bias and greater support for right-wing extremist policies.

By refusing to accept the basic fact that today's Republican Party is a white supremacist terror organization, the mainstream news media is repeating exactly the same mistakes that led to the Age of Trump and the coup attempt of Jan. 6.

Greene and her America First Caucus are not an aberration. They are not something strange or alien to the Republican Party. In many ways, she and her proposed group are the Republican Party's heart, passions and unrestrained id. This is a dangerous truth that the mainstream news media is afraid to speak publicly and forcefully.

In effect, the media's desperate search for "reasonable Republicans" is an attempt to normalize the abominable. That only serves to enable neofascism. This is not a bad habit, an involuntary compulsion or a "lack of journalistic imagination." It is a perilously irresponsible choice that may lead to the demise of American democracy.