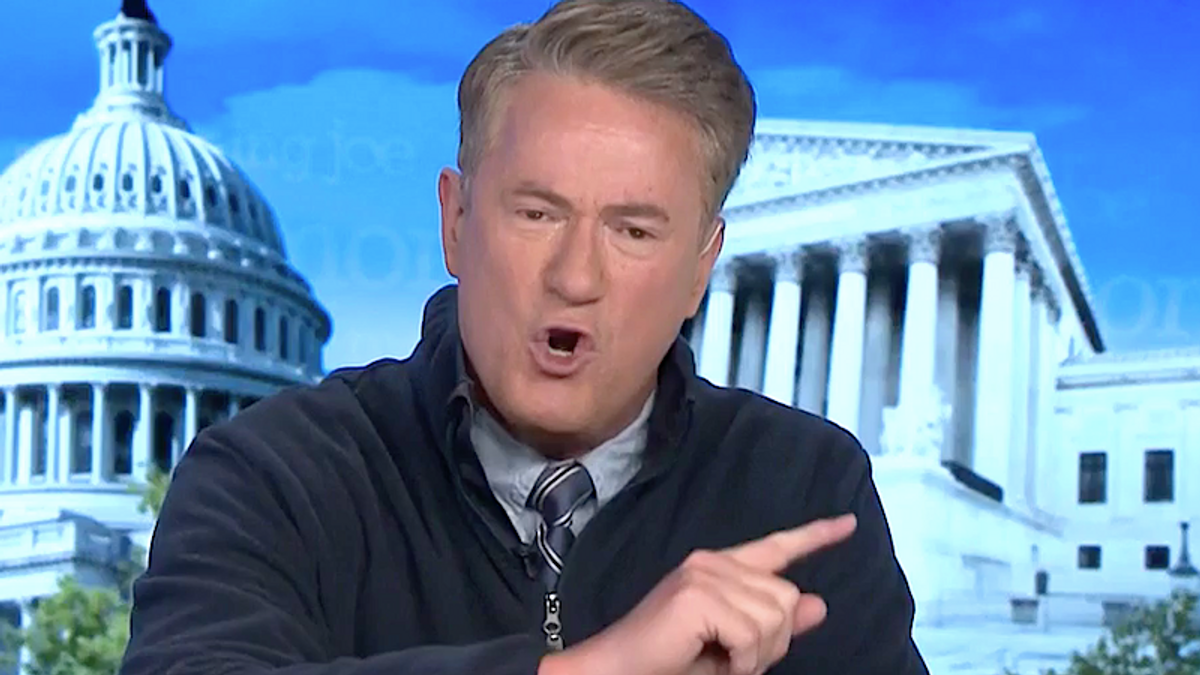 MSNBC's Joe Scarborough lashed out at his friends and family members who are still clinging to the lie that Donald Trump had the election stolen from him.

The "Morning Joe" host spent much of Friday's broadcast railing against the people who once insisted, "America -- love it or leave it," and he said that questioning President Joe Biden's legitimacy based on the flimsiest possible evidence was an insult to the Constitution and democracy itself.

He called out officials in Arizona who are legitimizing conspiracy theories with their farcical "audit" of Maricopa County's results, which will likely result in the costly replacement of voting machines there.

"It's just such nonsense that they think Republicans running Arizona in Maricopa County and Republicans running the Georgia election are going to rig those elections," he said, "and you look at the vote counts, county by county, and it's just lazy and it's stupid. It's a lazy stupid conspiracy theory, and I say it's lazy, because all people would have to do is just do about five minutes of investigating when they see these lies spewed at them and they would do the truth. But they don't want to know the truth."

"They want to wallow in the lie that allows them to think horrible things about American democracy, that allows them to do things that has been far worse than desecrating the American flag, than is far worse than kneeling on sidelines before football games," Scarborough said. "What they're doing is desecrating democracy, they're desecrating American institutions. They're desecrating all the things that the American flag is a symbol of. So you will fight to the death for the symbol, you just won't give a damn for a second about the thing that symbol stands for -- Madisonian democracy, the Constitution of the United States, the people's House, the center of democracy, not just in America, but across the globe. So you're going to freak out over somebody not paying enough respect for a symbol, but you're just going to -- I'll just say, throw dirt all over everything that symbol represents, and you do it every day."

"This is not about Joe Biden, this stopped being about Joe Biden a long time ago," he continued. "This is about you, this is about you playing in to what every one of our enemies wants you to play into, that American democracy is not worth being trusted, that American democracy is no different than Russia. If you believe that, I will say to you what many of you said in the 1960s: America, love it or leave it! If you don't have respect in American democracy anymore, if you don't respect Madisonian checks and balances, if your guy doesn't win, if that's the new rules of engagement for this great republic, then just leave our country, because you're unworthy of it, and there are millions of immigrants who will come here and raise their right hand and buy into the creed and believe that we are exceptional, that believe American democracy is the greatest government on the face of the earth, and they will do it proudly! They will salute the flag proudly, and most importantly, they will fight for what that flag represents, while you shame yourself, while you disgrace yourself, while you disgrace our country in the eyes of the world. Yes, this is all on you."

"Get the facts, live in the light, follow the truth and love this country, and stop this -- or leave," Scarborough added. "Or leave if you're going to believe a reality TV show host's lies about the American republic, his desecration of American exceptionalism. Then just get the hell out, we don't want you here. That's all I've got to say."