An enormous neutrino observatory buried deep in the Antarctic ice has discovered only the second extra-galactic source of the elusive particles ever found.

In results published today in Science, the IceCube collaboration reports the detection of neutrinos from an “active galaxy” called NGC 1068, which lies some 47 million light-years from Earth.

How to spot a neutrino

Neutrinos are very shy fundamental particles that don’t often interact with anything else. When they were first detected in the 1950s, physicists soon realised they would in some ways be ideal for astronomy.

Because neutrinos so rarely have anything to do with other particles, they can travel unimpeded across the Universe. However, their shyness also makes them difficult to detect. To catch enough to be useful, you need a very big detector.

That’s where IceCube comes in. Over the course of seven summers from 2005 to 2011, scientists at America’s Amundsen–Scott South Pole Station bored 86 holes in the ice with a hot-water drill. Each hole is almost 2.5 kilometers deep, about 60 centimeters wide, and contains 60 basketball-sized light detectors attached to a long stretch of cable. 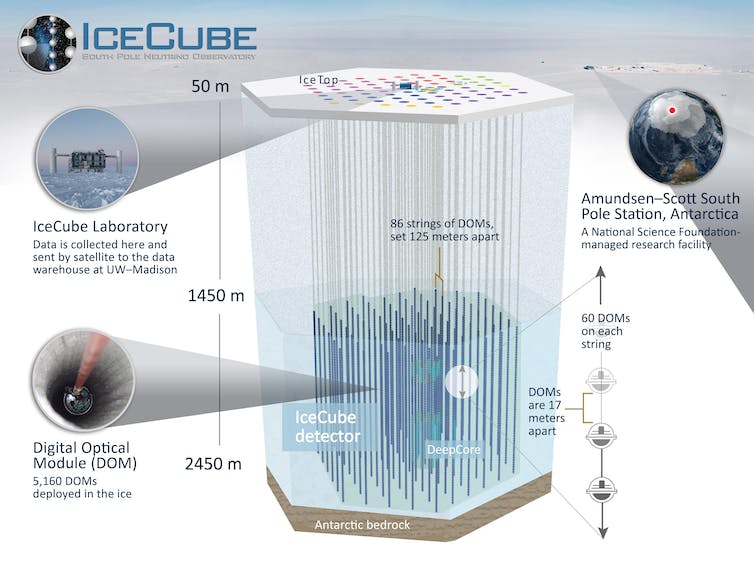 The IceCube neutrino observatory has more than 5,000 detectors buried deep in the Antarctic ice.

How does this help us detect neutrinos? Occasionally, a neutrino will bump into a proton or neutron in the ice near a detector. The collision produces a much heavier particle called a muon, traveling so fast it emits a blue glow, which the light detectors can pick up.

By measuring when this light arrives at different detectors, the direction the muon (and neutrino) came from can be calculated. Looking at the particle energies, it turns out most of the neutrinos IceCube detects are created in Earth’s atmosphere.

However, a small fraction of the neutrinos do come from outer space. As of 2022, thousands of neutrinos from somewhere in the distant Universe have been identified.

Where do neutrinos come from?

They appear to come fairly uniformly from all directions, without any obvious bright spots showing up. This means there must be a lot of sources of neutrinos out there.

But what are these sources? There are plenty of candidates, exotic-sounding objects like active galaxies, quasars, blazars and gamma-ray bursts.

In 2018, IceCube announced the discovery of the first identified high-energy neutrino emitter – a blazar, which is a particular kind of galaxy that happens to be firing a jet of high-energy particles in Earth’s direction.

Known as TXS 0506+056, the blazar was identified after IceCube saw a single high-energy neutrino and sent out an urgent astronomer’s telegram. Other telescopes scrambled to take a look at TXS 0506+056, and discovered it was also emitting a lot of gamma rays at the same time.

This makes sense, because we think blazars work by boosting protons to extreme speeds – and these high-energy protons then interact with other gas and radiation to produce both gamma rays and neutrinos.

The blazar was the first extra-galactic source ever discovered. In this new study, IceCube identified the second.

The IceCube scientists re-examined the first decade of data they had collected, applying fancy new methods to pull out sharper measurements of neutrino directions and energy.

As a result, an already interesting bright spot in the background neutrino glow came into sharper focus. About 80 neutrinos had come from a fairly nearby, well-studied galaxy called NGC 1068 (also known as M77, as it is the 77th entry in the famous 18th-century catalogue of interesting astronomical objects created by the French astronomer Charles Messier).

The neutrinos offer a glimpse into the heart of the active galaxy NGC 1068.

Located about 47 million light-years from Earth, NGC 1068 is a known “active galaxy” – a galaxy with an extremely bright core. It is about 100 times closer than the blazar TXS 0506+056, and its angle relative to us means gamma rays from its core are obscured from our view by dust. However, neutrinos happily zoom straight through the dust and into space.

This new discovery will provide a wealth of information to astrophysicists and astronomers about what exactly is going on inside NGC 1068. There are already hundreds of papers attempting to explaining how the galaxy’s inner core works, and the new IceCube data add some information about neutrinos that will help to refine these models.

Russian shelling of the southern Ukrainian city of Kherson killed 15 civilians Friday, officials said, as engineers across the country sought to restore heat, water and power to major cities.

Throughout the country, Russian air strikes in recent weeks have brought Ukraine's energy infrastructure to its knees as winter approaches and temperatures near freezing, spurring fears of a health crisis and a further exodus.

On November 22 and 23, meteorologists forecast heavy snow for the Texas Panhandle — including, according to some projections, up to two feet in Amarillo. And some Twitter users, upon hearing the forecast, used the snowstorm to mock and ridicule Sen. Ted Cruz.

In February 2021, Texas suffered unusually cold temperatures that put considerable stress on its power grid — which wasn’t properly winterized — and led to widespread outages. Millions of Texans found themselves without heat in freezing temperatures. During the crisis, Cruz headed to Cancun, Mexico to escape the cold and was slammed as “Cancun Cruz” by critics who argued that he was abandoning Texans when they needed help the most.