Animals sleep -- but little is known about how sharks do it

The Conversation
Photo by Wai Siew on Unsplash

Sharks used to figure prominently in my nightmares: coming after me in the ocean, rivers, swimming pools. But after spending some time with these elusive creatures in 2015, a more compelling question started to keep me up at night — do the very creatures that invade my dreams engage in sleep themselves?

As the world’s leading — and only — authority in sleep in elasmobranchs (sharks and rays), my research team and I have begun to unravel this enigma, and our latest findings of physiological evidence of sleep in sharks are the most conclusive on the topic yet.

Quiescence, or inactivity, is often the most basic behavioural characteristic that we associate with sleep. It was indeed this behaviour that my team set out to identify when we began our investigations into the presence of sleep in sharks. Specifically, we studied the presence of circadian-organized activity patterns, as sleep is controlled by the circadian clock (an internal, biochemical oscillator) in many animals.

A study we conducted in 2020 found the presence of daily activity patterns in all the species investigated, buccal pumpers and ram ventilators alike. Importantly, these patterns were found to be internally regulated (circadian in nature) in buccal pumping species. This was a major discovery and a great step in the right direction, but were periods of inactivity indicative of sleep? 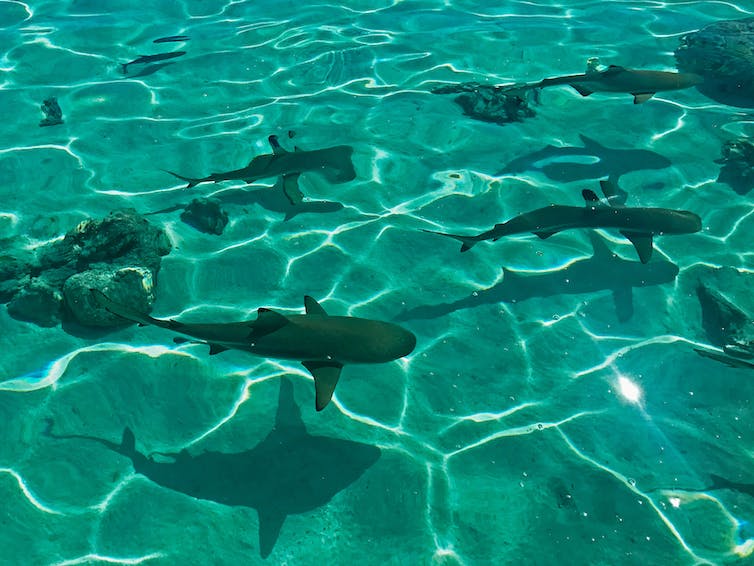 Some sharks need to constantly swim to passively push oxygen-rich seawater over their gills.

An animal’s responsiveness and awareness of external stimulation is reduced when asleep due to a sensory shutdown, or attenuation. As sleep researchers, we can exploit this ubiquitous sleep characteristic to behaviourally distinguish sleep from quiet restfulness.

Our 2021 study found that buccal pumping sharks were less responsive to mild electrical pulses following five minutes of inactivity. This became the criteria for our working definition of sleep in these animals.

Sleep is also internally regulated, so that animals can recover lost sleep by sleeping more. This characteristic was absent in the sharks in our study — they did not make up sleep following periods of sleep deprivation. This phenomenon is also absent during sleep in other marine fishes.

These somewhat conflicting results highlight an important point: behaviour can be deceptive and misleading. Animals can appear to be asleep while being awake and vice versa. Sadly, behaviour alone is often not enough to reliably identify sleep in animals.

The physiology of shark sleep

To conclusively verify our working definition of sleep in buccal pumping sharks (more than five minutes of inactivity is sleep), my team set out to find physiological evidence of sleep that aligned with what we had seen behaviourally.

To do this, we recorded changes in metabolic rates in New Zealand’s draughtsboard shark via recordings of oxygen consumption over a 24-hour period. A drop in metabolic rate during sleep has been reported in many animals and is considered a reliable physiological indicator of sleep.

Research shows that some shark species who actively pump water through their gills show behaviours associated with sleep.

We also recorded subtle behaviours associated with sleep in other animals, such as eye state (open/closed) and body posture (upright/flat). We found there to be no significant difference in metabolic rates between swimming sharks and sharks engaging in periods of inactivity that lasted less than five minutes.

When sharks were inactive for five minutes or longer, however, metabolic rates dropped dramatically. This physiological change was also accompanied by a conspicuous shift in posture, with sharks transitioning from an upright position (sitting up on their pectoral fins) to a completely recumbent position. Eye state, however, was found to be unrelated to the sharks’ state of consciousness, as the animals were often observed sleeping with eyes open.

Taken together, these data are the most conclusive evidence for sleep in sharks and verify our previous behavioural findings.

Sleep has been found in all animals studied to date, stretching as far back on the evolutionary scale as flatworms and jellyfish. As the earliest living, jawed vertebrates, sharks play an important role in helping us understanding the evolutionary history of sleep in vertebrates.

Our research has come a long way in uncovering the previously unanswered question of sleep in sharks, but we have only touched the tip of the iceberg. Now that we know that (at least some) sharks do indeed sleep, the next question to answer is how they sleep.

Nothing is known about sleep in ram ventilating sharks. Their need for constant swimming to facilitate gas exchange suggests they have likely evolved interesting adaptations to permit sleep under this unusual lifestyle. Our group is now conducting electrophysiological studies of brain activity that will provide comprehensive insight into the form that sleep takes in these animals.