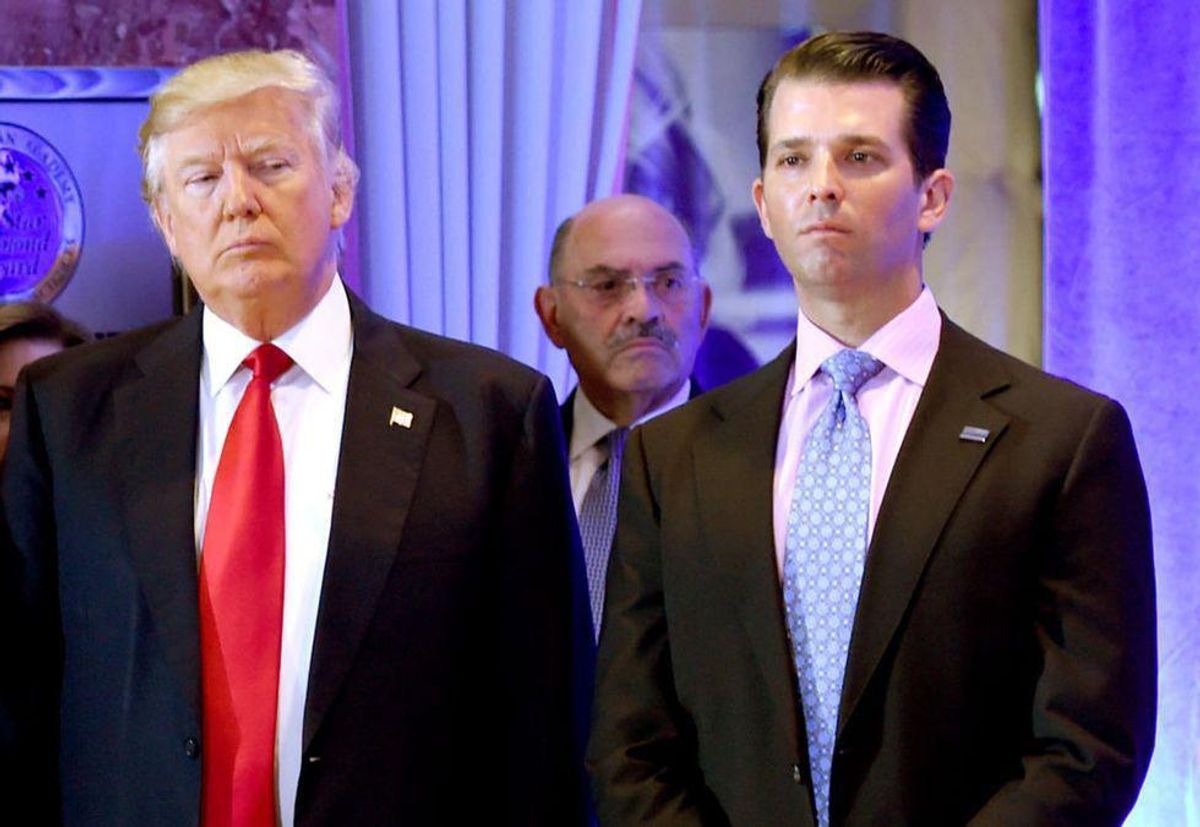 Once again, we are reminded of eternal truth this morning: Loyalty to Donald Trump is a fool's game.

On Thursday, Trump Organization Chief Financial Officer Allen Weisselberg surrendered to authorities after a grand jury indicted him personally and the Trump Organization generally for alleged financial crimes. As has been exhaustively demonstrated by journalists at the New York Times, the Trump family and their company engaged in extensive tax fraud for literally decades, so much so that it would be safe to call their business a tax evasion scheme more than the real estate firm Trump portrays it as. The former president expects his henchmen to take serious risks and even commit crimes, but he himself will always keep his hands clean and leave others to take the fall. That's why it was Weisselberg, not Trump, who had to show up in court under federal charges. Trump himself is barely literate and believes bleach injections are sound medical care, yet he's somehow clever enough to slip the noose, again, leaving another lackey to take the fall.

Weisselberg is just the latest in a long line of people who found that loyalty is a one-way street with Trump. His longtime personal lawyer, Michael Cohen: convicted for campaign finance fraud for which Trump avoided legal consequences. His replacement lawyer, Rudy Giuliani: his law license was recently suspended and he is now under federal investigation. Former campaign manager, Paul Manafort: imprisoned for years, until Trump gave him a last-minute pardon.

As Trump's three wives discovered, the man has no gratitude and no loyalty. He repays such things by screwing you over. He only issued some pardons of cronies at the last minute because he thought it would serve his own personal interests. For instance, Roger Stone got convicted of doing crimes for Trump, got his sentence commuted, and went straight back to the business of doing Trump's dirty work, as evidenced by the way his name keeps cropping up in court filings about the January 6 insurrection. But, as a general rule, the reward for sticking your neck out for Trump is that he will leave you out to hang while he runs off to play some more golf, secure in his belief that someone else will always pay the price for his crimes.

And according to Politico, that's what's happening yet again.

Trump's reaction to watching his long-time CFO Weisselberg do the perp walk on his behalf was not regret nor sorrow nor guilt. Nah, he was reportedly "thrilled by what he saw as light charges," according to a source still close to Trump who says he "was emboldened by the news," believing he can spin it "as a political witch hunt that would backfire on Democrats." Trump's apparently shared not a single shred of concern for a loyalist who is in serious legal trouble — only glee at his own ability to make others suffer consequences that should be coming down on him.

Trump doesn't limit his tendency to screw over loyalists to those in his immediate circle, either. He expects all his followers, down to the most anonymous voter, to take serious personal risks to prove their loyalty. And when they get in trouble, he inevitably abandons them. We saw this with the people who stormed the Capitol on January 6. Trump openly tricked them into believing he would be joining them, declaring from the podium that "I'll be there with you" as they rampaged through the building. However, as soon as he left the stage, Trump reportedly told his staff that he wasn't speaking "literally" and then he returned to the safety of the White House while his pawns staged an attack that left four of them dead. Now hundreds of them have been arrested, some on very serious charges, while Trump himself gets to spend his days freely wandering Mar-A-Lago. He's down there just soaking up attention by crashing weddings, memorial services, and other events.

An even larger scale of sacrifice is what Trump asked of his supporters in the face of the COVID-19 pandemic.

Trump decided early on to frame the pandemic as a "hoax" perpetrated by the mainstream media to ruin his presidency. His supporters got the message and proceeded to act as if any acknowledgment of the dangers of COVID-19 was an act of disloyalty to Trump. They rebelled against masks and social distancing as Trump egging them on every step of the way. Now Trump supporters across the country are even rejecting the vaccinations to a degree that vaccination rates map closely to partisan loyalties across the country. Trump never explicitly asked them to avoid the shot, but that doesn't matter. He made it clear that loyalty to him means pretending the virus is no big deal, so they refuse to take even this precaution against the disease.

The result is that Trumpers are paying for their loyalty to their orange messiah with their lives.

Of the people hospitalized for COVID-19 in May, 99.9% were unvaccinated. Of those who died of the virus that month, 99.2% were unvaccinated. Trump himself got a severe case of COVID-19 in October, but unlike his followers, he had a team of doctors working tirelessly and bending every rule to get him care, allowing him to survive the kind of case that the less fortunate simply die from.

Trump supporters have eyes and ears. They know that their leader uses people and then throws them away. So how is he able to get people — literally millions of people! — to keep blindly following him anyway?

We see this most clearly in the case of Giuliani, who clearly thought of himself as some kind of criminal mastermind, making it especially delicious when he discovered that nope, he's just another Trump patsy! And we see it with all the Capitol rioters who cheerfully posted pictures of their insurrection on social media, so confident that they'd pull this off that they never paused to consider that their own images would only end up being evidence of their guilt in criminal court.

Trump is hardly the first person to figure out that the right is full of people with outsized egos who falsely think they're smarter than everyone else, leaving them vulnerable to fraud. Conservative media has long been funded by fools who can't wait to be parted from their money. Engaging right-wing media, whether it's mailing lists or cable news or Infowars, means being constantly bombarded by ads for useless supplements, survivalist "kits," and gold investment schemes, all various levels of scam that prey on typical conservative's foolish desire to believe he has an edge over the "sheeple."

But there's no doubt that Trump has a particular talent for tricking stupid people into thinking they're smart, and then picking their pocket while they toot their own horn. Maybe it's his combination of narcissism, ignorance, and sociopathy that gives him a deep understanding of the worst impulses of others. Whatever it is, it's something that his former lawyer/fixer, Michael Cohen, openly warned Republicans about in 2019, during House testimony offered after he pled guilty to crimes committed for Trump.

"I did the same thing that you're doing now for 10 years," Cohen warned, saying, "I can only warn people. The more people that follow Mr. Trump as I did blindly are going to suffer the same consequences that I'm suffering."

Trump followers don't listen. They all think they're the ones who will be by his side, skipping away while some other idiot is stuck with the consequences. Their egos will never let them see that the only person that Trump protects is Trump, and time and time again, they pay the price for their delusions.