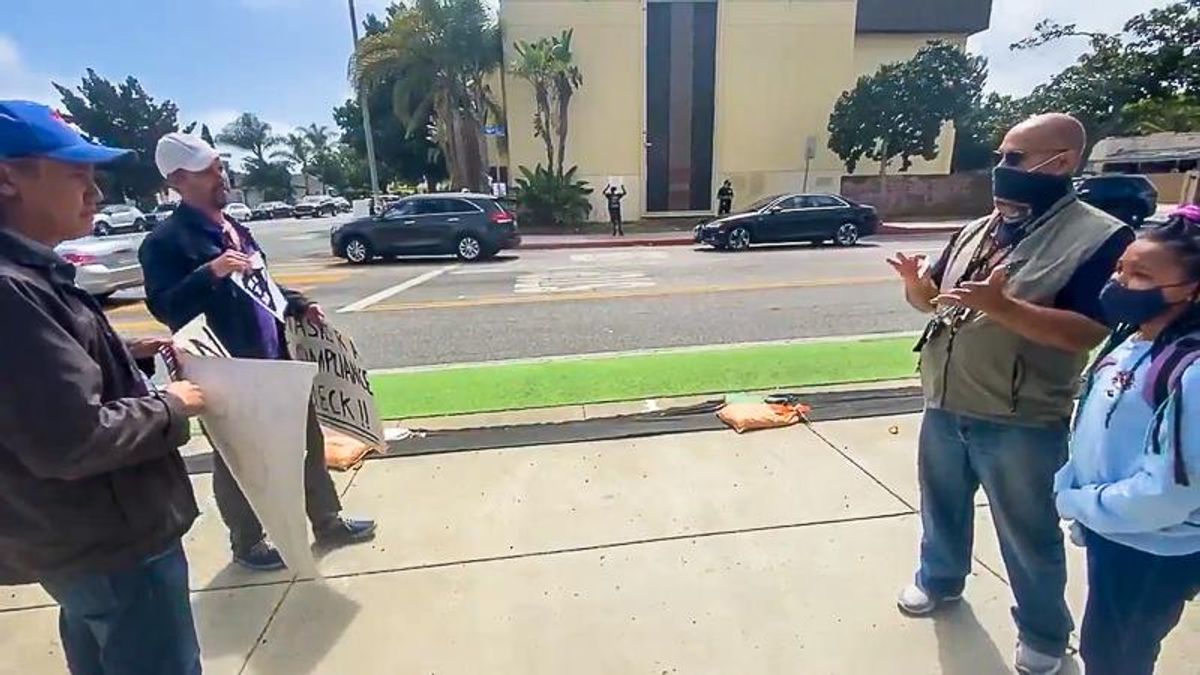 California activists who oppose masks and vaccines argued with a Black health care professional about whether COVID-19 safety measures are a form of slavery.

The confrontation occurred during a protest against masks at John Adams Middle School and Will Rogers Elementary School in Santa Monica on Monday. Video of the incident was shared by Samuel Braslow of The Beverly Hills Courier.

In one video, activists are seen arguing with Dr. Blaine Pope and his daughter, who are both Black.

"This is a form of slavery, man," another protester chimes in.

"We have been through slavery," Pope's daughter points out. "You have not."

Later in the conversation, the protesters suggests that COVID-19 is a worldwide conspiracy.

"The truth is this is all about control," the protester says.

"They want to enslave humanity," the second protester agrees.

"For what purpose?" Pope asks.

"They want to depopulate the world," the protester insists. "They think there's too many people on the planet."

"Who's the they?" Pope presses.

The protester names Bill Gates as the culprit.

Watch some of the video clips below.

A man walking a dog yells at the protesters to “get the fuck out of my neighborhood." pic.twitter.com/DjqlZ4ea2R
— Samuel Braslow (@SamBraslow) May 3, 2021

A woman tells a protester that she has lost 3 family members to covid. The anti-masker says “it probably wasn't even Covid that killed them.“ pic.twitter.com/GU2EmFVofa
— Samuel Braslow (@SamBraslow) May 3, 2021

One protester tries handing out cards to the middle school students as they leave school. One girl tells them to “kill yourselves." pic.twitter.com/ysDYIUWZ4i
— Samuel Braslow (@SamBraslow) May 3, 2021

One parent, apparently recognizing one of the protesters, yells at the group through his window. “Now I know, you're that idiot!…We've had this conversation before."

The driver says he has also lost somebody to of Covid, a theme of the day. pic.twitter.com/iT7nvshRqo
— Samuel Braslow (@SamBraslow) May 3, 2021

The protesters get into a conversation with a girl and her father, Dr. Blaine Pope, who works (it turns out) in public health. They say they shouldn't be made to wear masks; Dr. Pope says they are missing the “public" part of “public health." pic.twitter.com/RijfUIeL80
— Samuel Braslow (@SamBraslow) May 3, 2021

One Protester tells Dr. Pope, who is Black, that the masks are “a form of slavery." His daughter exclaims, “We have been through slavery, you have not!" pic.twitter.com/XZP9QTLUsZ
— Samuel Braslow (@SamBraslow) May 3, 2021

Dr. Pope asks an anti-masker to explain what “agenda" COVID-19 serves and to name the “they" behind it. The protesters answer that the agenda “is about control" in order to “depopulate the world."

The protesters, who seem skeptical whether COVID-19 is even a real virus, argue that nobody is actually dying from COVID. Dr. Pope points out that COVID can precipitate a health crisis in vulnerable people. pic.twitter.com/5tp7n5wTxo
— Samuel Braslow (@SamBraslow) May 4, 2021