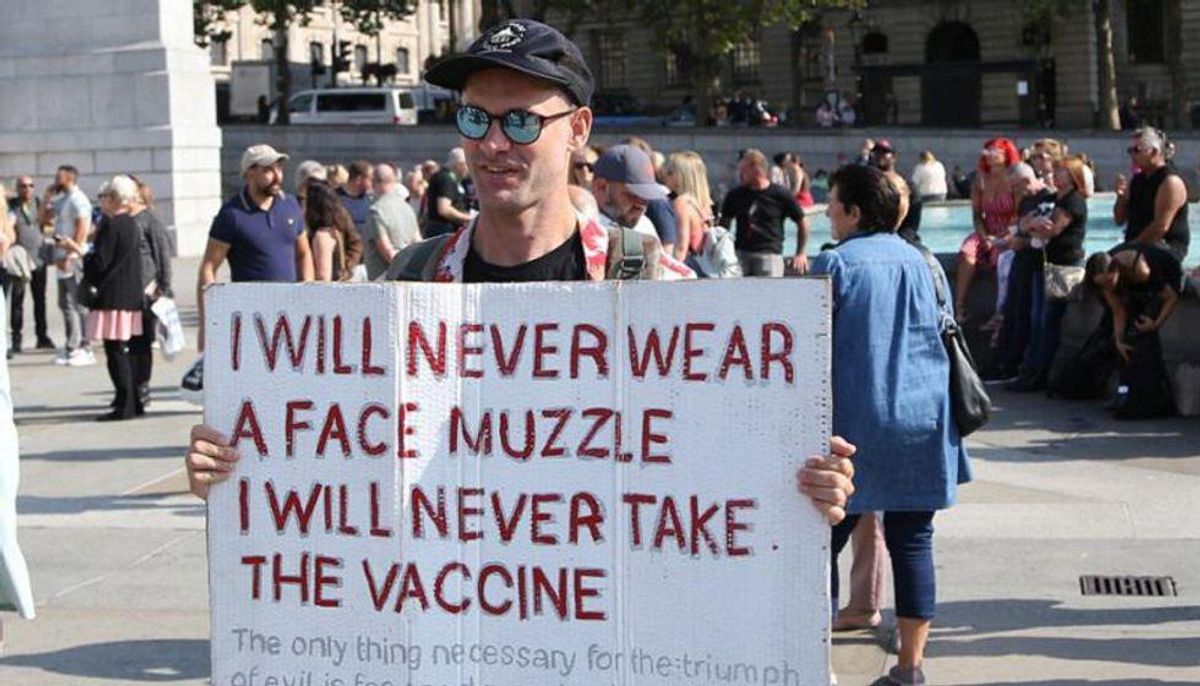 Fights with grocery store managers have turned into political careers, VICE News reported Thursday, as more anti-maskers and anti-vaccine are signing up to run against Republican governors who acted to try and contain COVID-19 as it spread across the United States.

"COVID hits, and Mike DeWine shuts down the state, closes businesses, sets curfews, and we lose 400,000 jobs. Suicide and depression are up. Even in 2021 while other states are coming out of it, Ohio still seems to be falling behind," Renacci told VICE News before he announced his candidacy. "COVID clearly shows that he is not able to lead our state in the direction it needs to be led."

As a fact-check, President Joe Biden made a similar assumption that suicides were up due to COVID-19 but the Journal of the American Medical Association revealed that there were actually fewer suicides in 2020 compared with 2019 and 2018. Ohio wasn't unique in the number of jobs that were lost due to the crisis and like with other states, those numbers are improving, according to the BLS.

VICE noted that DeWine has never been popular with the GOP for his support of gun safety laws and other issues. They see him as a "country club Republican," the story said.

"Trump has already threatened to oppose DeWine's election, and Renacci is working with former Trump campaign manager Brad Parscale on this campaign. But Trump is known to spurn 'losers' and Renacci was the only GOP candidate to lose statewide in 2018, so it's not a lock that he'll get the former president's endorsement this time," said the report.

Still, those right-wing Republicans are hoping that they can capitalize on mask-hate to mobilize enough voters to a victory. DeWine isn't the only governor facing the challenge. While Gov. Greg Abbott (R-TX) seems like he couldn't be any further right, former Republican Party Chairman Allen West is looking at running against him. West, a former Florida Congressman, move to Texas in 2015 for a new job.

Idaho Lt. Gov. Janice McGeachin (R) launched her campaign against Gov. Brad Little (R-ID) attacking his state-wide order in March 2020 to stay at home in an effort to stop the spread, "protect our most vulnerable citizens and preserve capacity in our healthcare system," he said last year.

McGeachin ushered in her own anti-mask law when Little left the state last month. There was no state-wide mask mandate.

Little called McGeachin's action "an irresponsible, self-serving political stunt" and an example of the government "tyranny" she claimed to oppose, The Guardian reported. McGeachin has already been endorsed by a right-wing militia leader, who spoke glowingly as he introduced her at an event, The Guardian also reported this week.

"We need to do everything we can to get her where she can do the most good for us … we got to get her in there for us," said Eric Parker before embracing McGeachin on camera.

Gov. Charlie Baker (R-MA) is being attacked from the right too as Republicans claim he has been "disloyal" to Donald Trump.

"There's been talk of a censure and of party rule changes that could make things more difficult for Baker to win the nomination next year," reported Politico's Lisa Kashinsky. "The state GOP chair recently sought to diminish Baker's authority by knocking him off the committee that determines party endorsements. If the governor chooses to seek a third term in 2022 — he hasn't indicated his intentions yet — there are signs he could get a challenge on his right flank.

There likely aren't enough anti-maskers and anti-vaccine people to elect a state leader, but it could be enough to overthrow a Republican Primary Election as the base of the GOP has been taken over by far-right pro-Trump ideologues.