Are the fish in your aquarium happy? Five things to look out for

If 1,500 captive mammals suffocated to death in a zoo, their suffering would spark an outcry. So when a Berlin hotel aquarium exploded at the end of 2022, why did so few people comment on the welfare of the fish? Aquatic species don’t seem to induce the same emotional response. And this disparity is clouding our understanding of their lives in captivity.

After decades of studying sentience in fish (that is, their capacity to experience feelings and sensations), the consensus among scientists is that fish can feel pain. Pain in humans has an important emotional component, and the same appears to be true in fish, which are also capable of anxiety and fear. This, along with converging evidence that fish can carry out complex tasks involving tools and problem solving, puts them on par with other vertebrates.

Fish are the third most popular pet in the UK, and 9% of the population owns at least one. The ornamental fish trade is huge, with millions plucked from their natural habitats each year (mainly in Asia and the South Pacific) and shipped to aquariums predominantly in the US and Europe.

Attitudes towards fish are somewhat cooler than for other species, though. When considering fish as food, surveys have consistently found that people are least concerned about the welfare of fish among other farmed species. This may be because fish diverged from our evolutionary path so long ago.

But all that distance collapses when you find yourself with a water-breathing companion. If you’re thinking of buying a pet fish, there are five things to consider if you want to keep your new friend happy.

Many people feed their fish food that isn’t appropriate for the species. Many people struggle with feeding fish food that’s for their species. For example, keepers of tropical fish and goldfish in the same tank will find that tropical fish love high-protein snacks like bloodworm or brineshrimp, but too much protein is bad for goldfish.

You might feed your fish the right food but neglect to tailor the quantity to the size and age of the fish in your aquarium. There will be strong competition for food in the tank, particularly in larger groups, which means the younger fish might go without. 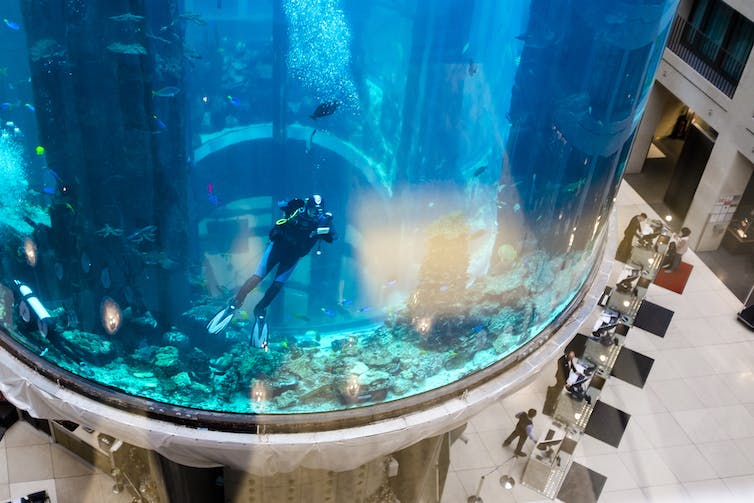 The Berlin AquaDom aquarium in 2019. Billie Grace Ward/Flickr, CC BY

Fish produce a lot of waste, and levels of ammonia, nitrates and nitrites can accumulate quickly in the tank water. There are monitoring devices that can tell you if the water quality in your tank is safe, but evidence suggests that many hobbyists don’t follow the guidelines.

And then there’s lighting. Fish sleep too – in fact, their sleep patterns are similar to humans. Fish need a defined dark period to rest, so whatever you do, don’t leave the lights on 24 hours a day.

Would you know how to spot an injured or diseased fish? If not, you’re not alone. Fish are some of the most poorly understood pets, even among professionals.

Injuries in home aquariums are common as fish form hierarchies and fight. Bacterial infections or parasites can also occur but may be hard to spot. It’s important that a disease is spotted early so the infected fish can be quarantined and treated to stop it from spreading. A fish rubbing itself on the tank, often in an attempt to remove parasites, is a strong suggestion that it is unwell.

What constitutes normal behaviour in a fish is hard to pin down. But one of the most important questions to ask yourself is whether the fish’s natural group structure or environment can be reflected in the tank.

If your fish is a shoaling species (meaning, they arrange themselves in tight formations called shoals) then they like to live in groups. Zebra danios, for example, should be kept in groups of at least six of their own species. There is a delicate balance, though: overcrowding will give rise to aggression as fish compete for food and space, while too few fish will prevent them from shoaling. 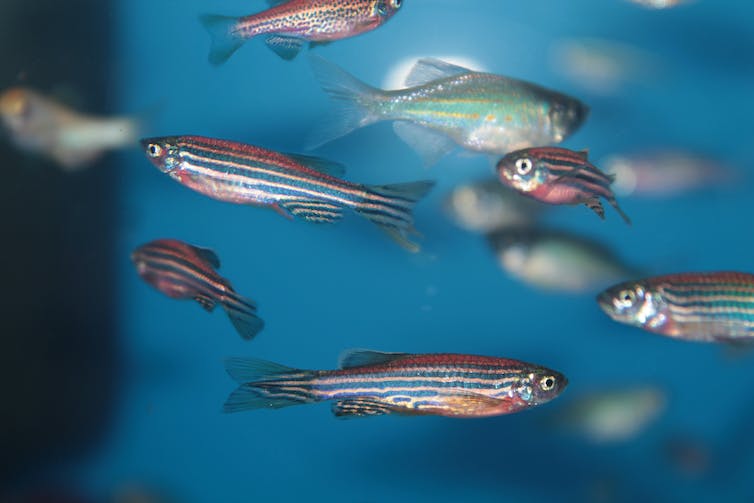 At the very least, tanks should be big enough to allow fish to swim freely and there should be enough shelter (plants, or a small submerged canopy for them to hide under) for a chance to be alone if they want to.

There are several ways in which a fish could be living in fear. Some fish may be regularly bullied by larger tankmates, which becomes torment when there are no hiding places.

Fish are also sensitive to things outside their tank. For example, is the tank near a hot radiator or an open window? Is it disturbed by vibrations from a nearby washing machine? All these factors can cause fear and distress.

If you are planning to keep fish and have a home aquarium, it may seem like there is a lot of work involved. But, hopefully, this list shows that fish have complex needs just like other pets – even if you can’t take them for a walk.

WASHINGTON — Under the leadership of Rep. Jim Jordan (R-OH), Republicans have started an investigatory committee to dig into the Justice Department investigations into Donald Trump and the Jan. 6 attack. But after recent reports that former special counsel John Durham and former Attorney General Bill Barr were desperate to uncover corruption in Robert Mueller's probe, Democrats are looking for accountability too.

Sen. Dick Durbin (D-IL) has announced that under his chairmanship of the Senate Judiciary Committee, he intends to investigate the Justice Department's actions under Barr and specifically the Durham probe.

Making good on a midterm election promise, Representative James Comer (R-Kentucky), the chair of the House Oversight Committee, has announced that next week the Committee will host a special hearing titled, "Protecting Speech from Government Interference and Social Media Bias, Part One: Twitter's Role in Suppressing the Biden Laptop Story."

According to the Committee's press release, the Feb. 8 hearing will feature three former Twitter employees who have been documented as the company's gatekeepers who specifically censored the New York Post's stories on President Joe Biden's business practices that were accessed from the laptop of his son Hunter Biden.